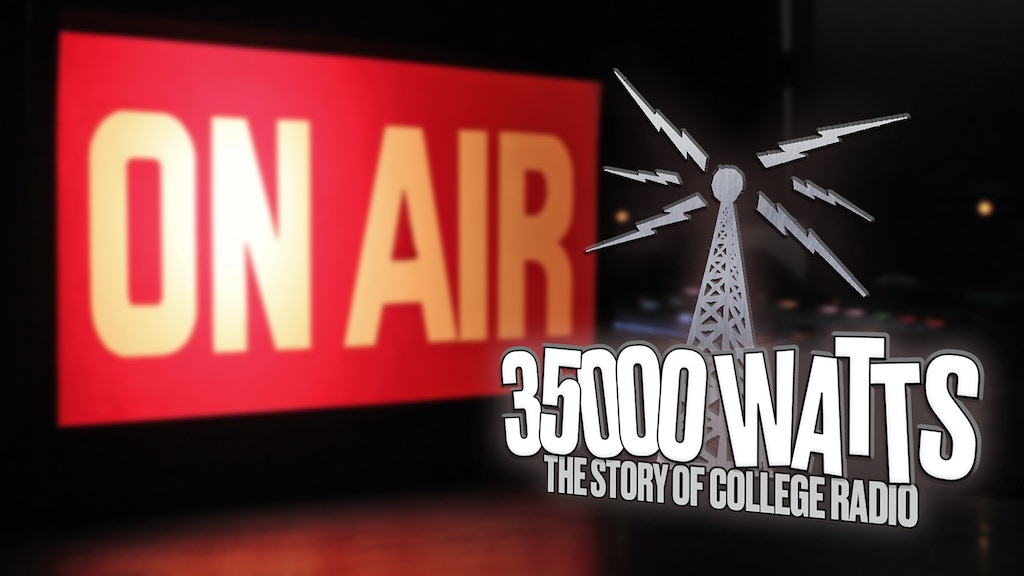 A FILM THAT IS LONG OVERDUE

This is the untold story of college radio brought to life by the students behind the mic and the bands they made famous. It’s the story of the youth and music culture that originated, and later flourished, on the airwaves of American colleges and universities, establishing a new generational voice and a new path to success for many alumni and artists.

THE STORY OF COLLEGE RADIO

Highlighting an era where college radio’s influence was at its peak, 35000 Watts: The Story of College Radio also examines its humble beginnings and how it evolved to create hugely impactful experiences for local and regional communities, students finding their voice, and the musicians seeking their shot at hitting it big.

The film dives deep into the music that was the heart of college radio programming, exploring the symbiotic relationship between artists creating music that did not fit into commercial radio formats and the student-run radio stations that were more than happy to play it. The film features interviews with iconic big-name acts and smaller regional bands who lived their rock-and-roll dream for a short while, as well as discussions with former college radio alumni who spin on about their role in college radio and why college radio is still relevant in today’s media-saturated landscape.

Despite this positive impact, college radio stations seem to be forever locked in a battle to justify their existence and stay on the air in an increasingly crowded landscape. Threats can come from any direction and every station has a handful of heroes who have fought to keep their stations from shutting down. The stories they can tell about their efforts are sometimes worthy of entire films on their own.

Without the efforts of those who started college radio stations and kept them alive, we might never have seen the talents of David Letterman, Billy Crystal, Howard Stern or Bob Odenkirk. We might never have heard the music of R.E.M., The B-52s, U2, Pixies or The Cure. These artists and entertainers, plus many, many more, all found their audience first on college radio.

This film is a celebration of the independent spirit that created so many culture-defining stations and kept them on the air for generations. 35000 Watts: The Story of College Radio delves into the ongoing impact and legacy of those who were at the epicenter of this radio revolution.

You’ve seen the pitch video, you’ve read our story and we hope that you are as excited to see this film as we are to make it.  We’ve gotten this far from our own personal investments of time, money, and most of all  –  passion.

Now we need your help to fast-forward to the next track, because whether you know it or not, college radio has impacted your life in some way.

Where does your mind go when you hear that minor chord at the top of Jane’s Addiction’s “Been Caught Stealing” or the opening riff to “Smells Like Teen Spirit”?

Did your college late nights involve David Letterman’s infamous Top 10 Lists? Were you telling all your friends “You Look Marvelous” in the vein of Billy Crystal’s Fernando Lamas? Do you consider “Weird” Al Yankovic a comic genius?

Do you remember the first time you heard “Rock Lobster” by The B-52s or “Radio Free Europe” by R.E.M.? Do you always have to play “New Year’s Day” on January 1st?

If those moments make the hair on your neck stand up or unlock core memories – you can thank college radio.

If the soundtrack of your life involves bands like U2, R.E.M., Pearl Jam, Pixies, The Police, Fugazi, The Smiths, The Cure, Sonic Youth, Violent Femmes, The Ramones or Talking Heads – thank college radio.

Please consider sharing a small token of thanks to support the Story of College Radio. Your financial support will allow us to talk to more people, visit more stations and uncover more amazing stories. This untold-tale has been sitting on the shelves of your memories, and ours, and deserves to be unsleeved and played at full volume for the world to hear!

YOUR DONATION IS TAX-DEDUCTIBLE

ALL donations to this campaign are tax deductible. In accordance with IRS regulations The Film Collaborative (TFC) issues tax receipts. Kickstarter admin fees and credit card processing fees are deducted before TFC receives the funds. TFC issues tax receipts on the amount they receive minus the fair market value of the incentive you select.