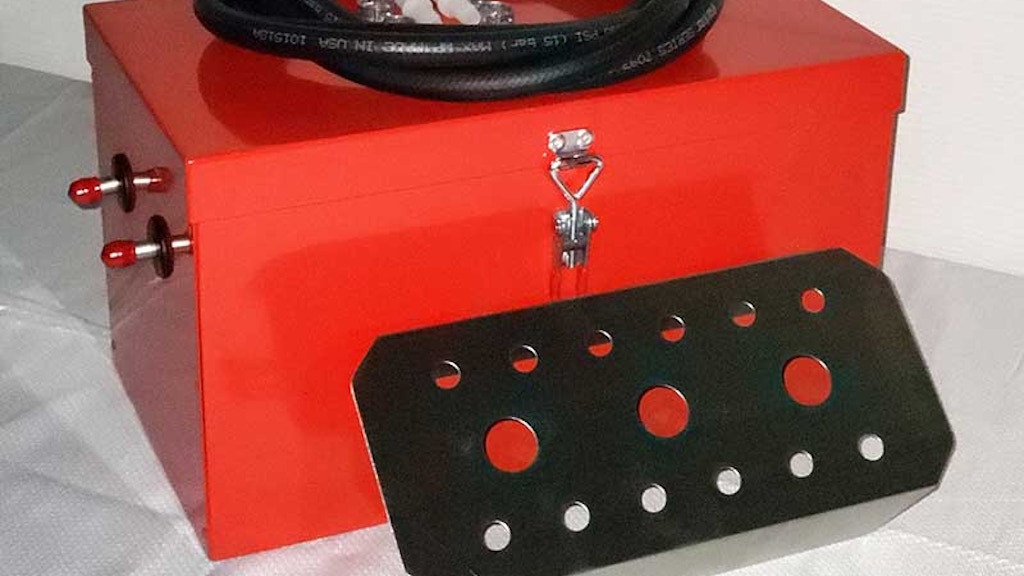 Changing the Way You Recreate and Travel

The A.T. Hotbox came about almost by accident. The birth of this concept didn’t even start where it ended up, but that project is now in the works to complete as well. From snowbikes to side by sides, the transformation of how this product came about surprised even us.

We started on the side by side idea when we ran out of snow in the late spring of 2018. We had just purchased our first side by side in April 2018 and went out with some friends for a ride. Electing to build a fire to roast brats for something hot to eat, we looked at the side by side in the same fashion of the system we had started with on the snowbikes before winter ended. The light came on when we realized you could tap into the cooling system of these machines.

In early May 2018 we started with an old tool box we had lying around our shop, a 20″ old green, rusty box. For the heat element, we used an extrusion that is used to help with cooling on snowmobiles. Pieces had to be welded, lines had to be designed to fit everything together. Once we got this design started, the very first prototype began to work, but not as well as we wanted. This project at this point was simply tinkering with an idea for our own personal use to just reheat leftover food while we were out riding.

The second prototype was using that same tool box, but cutting off 4″ to shrink it to a size that worked for the bed of the machine. We also went from using the single element extrusion on the bottom to adding two additional elements on each end. Again, more welding would be required and testing to make sure it did not leak. Adding this additional heat allowed the reheating of food to work perfectly, and by accident on a trip, we found out it would even actually cook. We had stew meat in the cooker and got delayed on a trip, the extended time actually cooked the stew meat thoroughly.

We knew we could not yet call it a cooker, just a warmer. The testing to be able to change the concept would come with attempting to cook raw chicken and pork. By this time we had moved on to yet another better design idea as well, . So we excitedly decided to test chicken first. I used two different pieces of chicken breast, one whole, one sliced – each in their own separate containers. I was more than amazed to say the least at the result. Not only did the chicken  breast cook, both the whole (though it took about 20 minutes longer) and the sliced pieces, it was tender, moist and the juiciest chicken breast I had ever seen! What happened is the food does not get oxygen to it when it is inside the cooker and inside the bags it is cooked in. In approximately 2 1/2-3 hours we went from raw chicken breast (1# pieces) to a restaurant perfect meal.

So the chicken worked, but would pork….I sliced up boneless pork spareribs soaked in brown sugar for a ride out in the sand dunes. After the same amount of time, approximately 2 1/2 – 3 hours, it too had cooked all the way through. Success!

We now went from thinking of this product as something for our own use to something that perhaps could be a huge convenience to the public. As of now there are only a couple of options to “try” and cook any food while you are traveling – the 12volt plug in style and the old fashion concept of attaching a can to the manifold under the hood. This concept we were developing was game changing to this industry.

We followed up with an Invention company and patent attorneys for help with this project. A patent search showed that nothing like this existed in the fashion in which we designed it. So the non-provisional patent access began. That was submitted August 7, 2018 – only three months after this whole process started. We had one year to continue and then file our final provisional patent application, which we did, on August 7, 2019.

During that one year period, we redesigned the heating element from the extrusion in the bottom to an actual heating coil. That coil is one 29 1/2′ piece of .035 stainless steel produced by the only manufacturer in the entire country we have found that can do it. The coil surrounds a 1/3 NSF food grade safe metal pan (like you see at buffets in restaurants). We also added insulation completely surrounding the coil to help hold the heat and  We changed the box design I think  a couple  more times before settling on the final design that we started manufacturing.

We have funded this whole project, including orders with producers for inventory, on our own. We wanted to have the inventory on hand and in stock if this invention took off. We were called foolish by some because we didn’t have a great marketing plan in place. We had done our R&D, polls and such asking people about it, so we knew it was a viable option, but our weak point is in marketing and sales. The team of my husband and I are pretty self reliant but we realize now with all the finances we have spent to get this product from nothing to ready for sale we need to raise money to hire the right people to help us market it. We have already had some failures in that area as well. Promises made by people, who then fall flat on their faces. The funds we hope to raise through this crowdfunding campaign will do two things: 1 – having inventory in stock, we are able to provide the backers with the product immediately, so they will have the opportunity as soon as they join to receive it and start enjoying traveling life a lot better; and 2 – be able to pay for the right kind of target marketing for our industry.

How long does it take to install and take off?

It is not recommended to be removed from side by sides once installed, but for other types of vehicles where it is plumbed into the heater line instead of bypass line, a hydraulic quick disconnect coupler can be integrated. It takes approximately one hour for an inexperienced person to do their own install.

How much does it cost?

How do I know if it will fit my machine?

The A.T. Hotbox will work on most any four stroke machine or vehicle with a thermostat that runs 180* or hotter.

Do you offer a warranty?

There is a three (3) manufacturer warranty on the A.T. Hotbox itself and accessories, based on normal usage. Crashes, rollovers, not securing the item are examples of situations where the warranty would not be covered. Installation also not warrantied by manufacturer.

Do I have to drill into my machine’s body to mount this box?

Perhaps, depending on make and model of side by side machine for the coolant lines, but not necessary for mounting however. It will depend on what the A.T. Hotbox is being installed on.