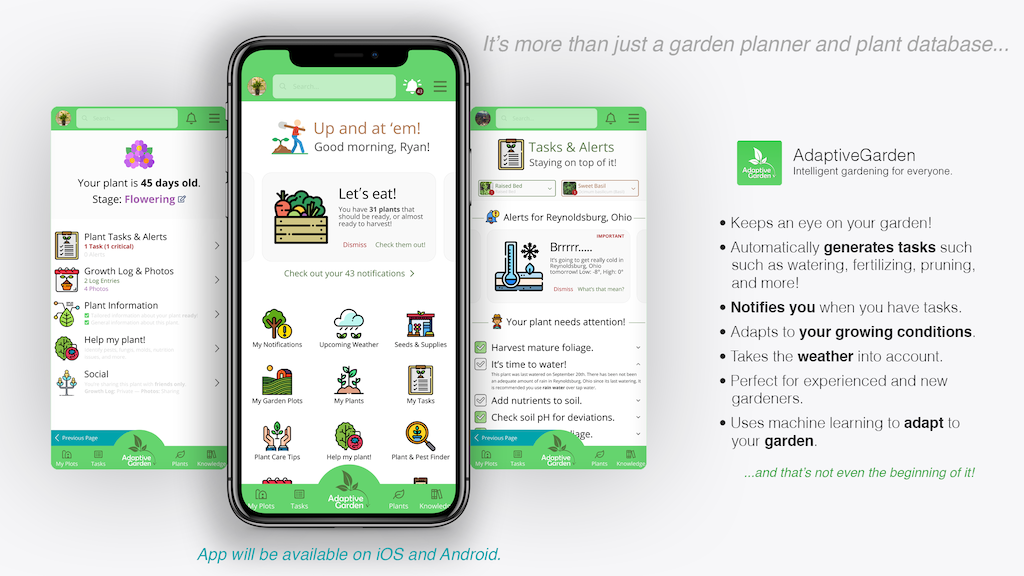 A gardening app that adapts to your knowledge, location, and lifestyle. Grow plants successfully no matter your skill level.

AdaptiveGarden is a gardening app that doesn’t suck. In short, it’s a garden planner, garden manager, and master gardener in your pocket. It notifies you when you need to take action, and it does that without you having to know anything about the plants you’re trying to grow. Since it’s an app and can’t sprout hands out from the sides of your phone, it can’t grow the plants for you… but we’ll talk more about that in the future 😉

It’s all you need to start or maintain an existing garden, right in your pocket.

…and yes, it takes your location and the weather into account.

Most gardening apps suck. If you’re a new gardener, consider yourself lucky to not have had high hopes for technology only to be met with disappointment when searching the app stores. There are plenty of garden plotters and some plant databases that can only call themselves “gardening apps” because they’ve categorized themselves as such, but you won’t find something that actually helps you grow things. AdaptiveGarden is here to set the standard for what a “gardening app” should be.

There’s a reason most gardening apps fall short of hitting the mark, and that’s because it’s hard to make something that takes all of the many variables involved in growing successful plants into account. The app has to know about the gardener’s location, whether or not they’re growing organically, the weather in the area, if the plant is indoors or outdoors (or in a greenhouse), the gardener’s lifestyle, how much time they’re dedicating to managing their plants, and so much more.

That’s a LOT of stuff! It’s also why many people think they just aren’t cut out to grow anything. It’s hard work to keep track of everything even as a seasoned gardener, and the amount of dedication it takes to start a garden before you even touch a seed is just too much when you already have a busy schedule.

Take into consideration the different cultivars of the same plant species, mixed information on the internet and in books, and different people swearing by some product or practice that may work fine in California but definitely won’t work in Ohio, and you’re just asking for problems.

Getting something started is just one of the struggles. What about when things do inevitably go wrong? You’ll have people saying to do anything from writing the plant off all the way to peeing on your plant (I won’t get into urea here, but if you’re going to pee on your plant, please don’t urinate on your tomatoes the day before sharing them with your neighbor… and please make sure the plant will benefit from undiluted urine or dilute it first.) Note: AdaptiveGarden will not give you any tasks that are related to restroom breaks.

It’s hard to differentiate between old wives’ tales and claims backed by science when it comes to gardening. Having a “green thumb” doesn’t mean you have been gifted with magical hands capable of growing healthy and productive plants, it simply means that you know what information to trust.

I made you a picture… I guess you could call it an infographic, but it’s more “info” and less “graphic”:

How is this different from all of the other gardening apps out there?

Oh boy… where do I even begin? Well, for starters, no other application actually walks you through how to grow a plant, as the plant is growing, while keeping track of what’s going on in your area. None take your location or the weather into account. None watch the forecast for you. None issue tasks, so they require you to already know what you’re doing and the nuances involved. None are backed by science and vetted research. None have Artificial Intelligence finding growth patterns that humans have yet to discover. None ask you about your growing preferences, the location of the plants, or what plants are nearby. There’s even a feature planned (although it’s a “maybe” at this point and by no means guaranteed) involving GPS to help a bit with physical plant tracking. We’re at the mercy of technology and have to conduct some research on device compatibility and precision before that makes it on the board.

The only similarities between AdaptiveGarden and other apps available right now are items that AdaptiveGarden executes so much better that they aren’t even comparable.

What you’ll usually find are kinda-sorta plant encyclopedias that have maybe 30 plants in their database (never the cultivars – which can have different requirements, especially in the case of plants that we can’t mention here) and garden plotters (think MS Paint with a bunch of squares and a few pictures of plants)

I hate to talk down on anyone or anything but ask any gardener to see what they have to say. AdaptiveGarden isn’t a luxury… it’s a need, and if it’s going to achieve the big goals AdaptiveGarden has for the future (it goes WAY BEYOND an app and will have a massive positive environmental impact if successful) then I need to make that very clear to those who are lucky enough to have never tried to find a decent app to help with their plants.

Oh yeah, and if it can fit in the budget, AdaptiveGarden will let you share your garden with friends kinda like a social media app for gardeners. Let me know if you’d like that prioritized. That feature would help you and your friends hold each other accountable for their plants.

Sounds like an impossible thing to pull off, how do you plan to do it?

I’ve had the privilege to wear many hats over my years in the tech industry. I’ve also met so many incredible and highly intelligent people who have shared their knowledge with me. I’ve acquired skills in many areas of technology and gardening over the years, including exposure to machine learning (or “artificial intelligence” for a broader term) and big data. I’ve been the guy collecting the data, the guy verifying that the data is accurate, the guy reviewing research papers for credibility, the guy writing the code, and the guy designing the software. That means that I’ve gained the experience necessary to see the blind spots and develop solutions (like x-ray vision) to ensure requirements are met.

Having that exposure, I’ve identified the following potential problem areas:

Here’s how I plan to address those concerns:

More and more people are getting into gardening, which has clear benefits for not only the gardener (mental health, self-sufficiency, positive action, etc.) but also for the environment. These goals are not part of this project, but rather, future goals after the project is successful and further funds can be secured for each item. Transparency is very important, so we’re including these here. AdaptiveGarden has many long-term goals which include (in no particular order):

I just want to see screenshots!

Sure thing, there’s a position for a designer in the project budget because I’m more of a developer than a designer, but here’s what I’ve come up with. I have significant improvements planned and this is not even close to the full product. Some items aren’t pictured because they’re pretty boring, but I’ll include my favorites and will be happy to provide more as requested, just let me know what you’d like to see! Even though these may not end up being the final designs, I would absolutely love to hear any feedback regarding improvements or constructive criticism.

Note: you may have noticed that there wasn’t a previous page button in some screenshots. I’ve added a Previous Page button as well as a Create/Add button on the opposite end in newer prototypes to ensure devices without hardware or simulated hardware buttons are supported.

NOTICE: This project will initially launch in the USA. If you are not in the USA, it may take us longer to support where you’re at than the targetted launch date.