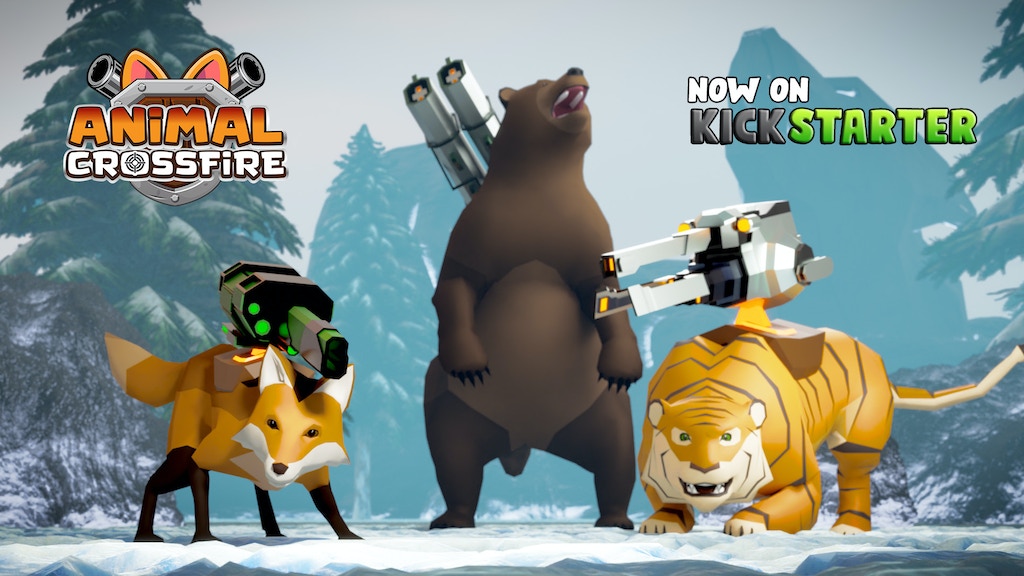 Developed with latest Unity version, Animal Crossfire is a third person shooter game from the Battle Royale Genre which combines the action from coop, and team arena games. On this action game you will be transported to a future age where animals have learned to use technology left by humans who are now extinct.

The battle takes place on a small island which houses diverse climatic conditions scattered around its 8 different areas, savannah, forest, tundra, beach, desert, port, city, and plateau. Before engaging into battle, you can choose a ship and up to 3 weapons to take with you to the isle, once selected you’d be deployed with your ship which you can point to the zone you choose.

Within the island you’ll find diverse items you’ll find useful to reach victory, from weapon enhancements to attack and defense items such as missiles or shields.

You can also enjoy the coop action within the same battle royale mode, gather your team and fight together against the fearsome giant octopus as he awakens when you step into his territory, destroy him, and get some surprising rewards; this is one of many more threats which will eventually come to the island with each new season making it even more difficult than the previous.

Below we present the story of why the animals fight each other in this brutal battle!

One of our main inspirations to make this game was Zoids Anime Series, but we wanted to have actual animals instead of robots fighting each other, we also wanted to have a bit of the scale of the battle royale genre, the animals however wouldn’t be totally balanced by themselves so we decided to give them turret style guns mounted on their backs, having the guns and the independent skills of each species we expected to have a different type of balance where each animal’s attribute will contrast with the others, we also wanted to have a world where humans had been long gone extinct giving the space for animals to evolve into the new civilizations of our planet, in a certain way we wanted to deliver a message about the damage we humans have dealt both to ourselves and our planet telling the story from the point of view of animals about to repeat the same mistakes we made many times before.

The first release will include the following languages, after the release we will add more languages ​​such as Chinese, German, Italian, French, Portuguese, Japanese and Thai.

if the community needs more languages ​​they will also be added.

For the map creation, we made diverse investigations looking for the habitats of different animals, we found that many animals can live in different climates, we reduced the number of habitats and put them together in 8 areas where each animal could use their different characteristics to get the advantage. to us it was important to create a unique universe with a different feeling for each zone so that the player would get the feeling of being on that animal’s habitat. Through art direction, it was essential to deliver the emotion of being on an animal’s place. All this effort gave as a result the map we named as the “Bio-world”.

The game areas were created based on the real natural habitat of the animal, each biome can be used as an advantage at the time of the battle, for example a polar bear can perfectly camouflage itself in the tundra, or a cheetah can go unnoticed in the savannah.

then we present the biomes of the BIO – WORLD

The best way to arrive with style is with a spaceship, and to do that you can choose whichever you like the most from all the ones available in the hangar. Each ship has a different style and options will increase with each Wild Season Pass.

We have added more than 100 different weapons which you will find in the armory, inside you can see the characteristics of each weapon, you can choose 3 different weapons to take them to the island and fight with them, each weapon has a different configuration but they have been analyzed and tested To avoid unbalanced weapons that could cause a bad gaming experience, by having balanced weapons in all aspects it now depends only on your ability to win!

– Force Field: creates an energy sphere which surrounds the animal and protects him/her for 5 seconds.

– Healing Zone: emits an energy beam which cures any animal within a range of 5 meters.

– Shield: creates an energy barrier in front of the player and allows him to move with it

-Barrier: creates an energy fence in front of the player on a chosen place

– Invisibility: hides the animal on a translucent appearance making it difficult to see

– Frag Grenade: launches a fire projectile which explodes after 3 seconds

– Toxic Grenade: launches a projectile which upon impact creates a toxic smoke cloud which damages any player nearby.

– Bear Trap: sets a bear trap on a chosen place and causes damage to enemies who steps on it.

– Missile: allows to deploy a missile attack at any position from drone’s view within a range of up to 40 meters from player’s position.

– Radar: allows to visualize other player’s position on the map

Up to the moment we can count with a good number of characters to ensure enough fun within the isle, we will present each one of them below; and don’t worry, there will be a lot more coming after, pretty much until we run out of the animals available on our planet Earth!

You will not be alone at the time of the action, our support animals will be with you, you can unlock them in the store with AC Gold Coins or AC Diamond Coins.

Each support animal grants different benefits, such as:

You will carry your support animal on your weapon so that it is very close to the action and no enemy will escape your paws.

¡Support animals will be your faithful companions in this great battle!

Each season we will introduce a new enemy which you can fight along with your teammates, or you could even ally with other players to defeat the beast, once defeated you and all player involved will gather additional XP, coins, Gift Boxes and even skills to use on the current match.

For us it is very important that you enjoy animal crossfire, that’s why we have added these 3 main game modes, we hope you enjoy it with your friends

also the experience is the most important resource to level up and rank up, within Animal Crossfire there will be 24 Elite Ranks to position all players, ranks will be restarted each season, but character level will be kept. Leveling up your rank will grant a Gift Box as sown above.

For our game Original Soundtrack, we’re collaborating with a great artist, René Rivera who will partner with us throughout the whole project to make you vibrate with his rhythmic drums and great style.

Currently, Animal Crossfire is planned to be delivered on Playstore (Android) by the first half of 2023. If we reach all our goals, we will also be able to release our game on iOS and PC, at the same time we will also have cross play across any platform. The game will allow mouse and keyboard input on PC and touch controls for mobile devices and will release with English and Spanish languages.

*the design of the images in the rewards was facilitated by catalyststuff through FreePick.com

As a first step in this wild adventure, we have established as the first goal the launch of the game for the android platform because the tests we have carried out have been on android, if we reach the next goal which is APPLE IOS, it will allow us to expand the amount of players in the game and will allow the acquisition of a virtual machine to export the game to the IOS platform which is essential for the packaging of the game for said platform, and as a third goal we have proposed the launch for Windows computers, The amount of the collection of this last goal is contemplating all aspects of cross-play between any device, as well as the cost for launching on platforms such as steam and the official Animal Crossfire website, which is already being developed and will serve for the publishing the game on the windows operating system..

our dream is to reach all platforms, that’s why we count on you to achieve it!

and… would you like to see Animal Crossfire on Nintendo Switch, Xbox and playstation?

To understand in detail how the proceeds of the campaign will be used, we have prepared this graph in which we explain in detail each important aspect for the game to be maintained.

We have many plans for the future of our game, and we would like to share it with you, achieving our goals we could add a lot of new animals, including the custom ones from our campaign rewards, this is a list of the next animals coming to game

And a lot more…

Animal Crossfire it’s the product of the partnership between 8 artists:

Cesar Reinoso is our programmer and is the one on charge of bringing the game to life, he works day and night to develop his first indie game with incredible quality

Marco Mendoza, together with Cristian, Jefferson, and Victor oversee the art direction and development, modeling 3D animals, ships, weapons, and all the elements that will build the world of Animal Crossfire creating a visual balance. All of them are passionate about art and storytelling, and are always looking for unique ideas and visuals, they’re working hard to create the best biome battlefield!

It was important to us to invest first our own time and money into this project and to make sure to complete some part of the game before looking out for support. Developing a game is not easy and we needed to question ourselves every day to make the best decisions from an artistic and technical point of view.

We are fully aware it is not always easy to reach financial goals. Game development always implies unexpected issues. However, we are a strong and passionate team, ready to achieve our goals.

The development of a videogame requires a lot of time and money. We have decided to continue developing our game no matter what; but with your help we will be able to take care of every detail. Even though we have advanced a lot, there’s still a lot of work to do. To continue working and keep the creative control, we need your help.

We are very excited to continue the battle!

We are convinced that once we have completed our game you wouldn’t want to stop playing it, not only for the great amount animals and weapons, but also the emotion of fighting along with your allied herd.

Animal Crossfire will not disappoint!