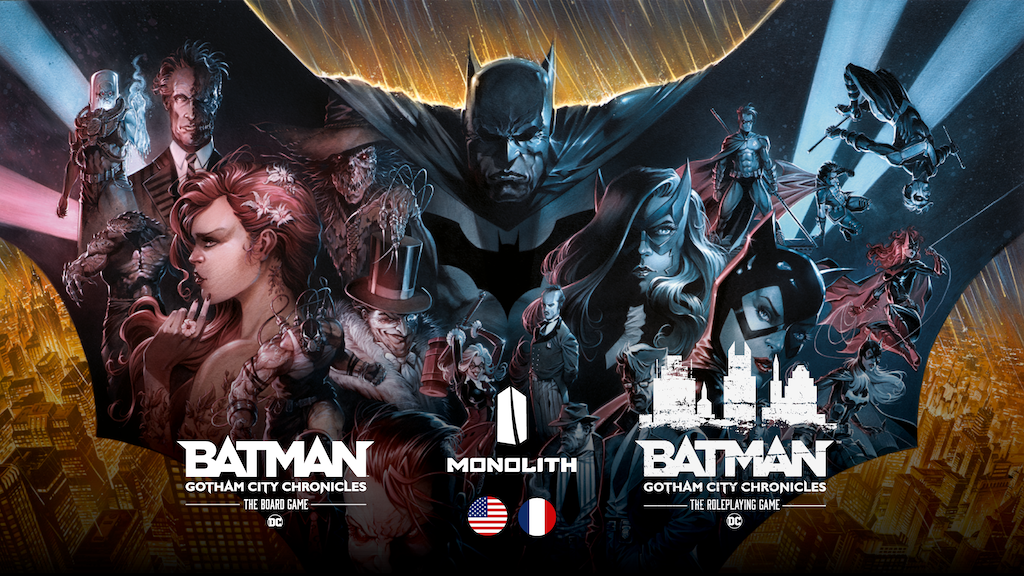 Take to the streets of Gotham City, as Hero or Villain, in our officially licensed role playing and miniatures board games.

This role-playing game will enable you to play a whole range of famous and unknown characters from the comics, films, series, or your own imagination.

Whether you and your friends choose an atmosphere of action, investigation, adventure, or suspense, Gotham City will be waiting with its avenues, skyscrapers, subterranean tunnels, criminal world, secrets, magic, and incomparable ambience, which is the result of 80 years of creations since the Dark Knight first appeared.

Aside from the role-playing game, this third season develops the Batman™: Gotham City Chronicles board game with a solo and a cooperative mode enabling you to play all your existing adventures, a gripping extension with a campaign mode and magnificent figurines, a box containing aid sheets tailored to each Hero, and revised rulebooks and additional game aids – along with a few surprises.

The original game will also be available once again as part of this campaign, accompanied by revised rulebooks thanks to the work of Paul Grogan from the Gaming Rules! channel.

You can enjoy his Playthrough & tutorial in the Media & Actual play section below.

Now, let’s talk about the Board Game.

Each game of Batman™: Gotham City Chronicles is played according to a scenario which describes the plot, location of the action, setup of the game,  number of turns, and the specific objectives each side is trying to  achieve in order to win the game.

The game involves two opposing  sides: the heroes and the villain. We wanted to represent that dynamic  up front by making it obvious from the art on the boxes. That’s right, boxes, because one box will not be enough to fit everything you will get.

But this separation has another purpose: it eases the setup of the game. The hero box contains the hero boards, screens, cards…everything the  heroes need to play a scenario. The villain box contains the miniatures,  tiles, dice, and everything needed to prepare the command board for the  fight to come.

Who’s laughing now?
As some of you already know, there is a collectible miniature of the Batman Who Laughs, which was featured in a French pack used in a Batman Metal comics collector.
This exclusive figurine will be given to anyone who makes one of the three pledges offered during the campaign (core boxes, all-in season 3 and Riddler Pledge), and only during the Kickstarter campaign! It will only be available as an add-on later on.

The third season of Batman: Gotham City Chronicles introduces several changes massively requested by the community, focusing on additions to improve gameplay and comfort of play.

Solo-cooperative mode, Hero profiles & game aids, a Supervillains campaign, and an imposing extension with branching adventures and character development, all made possible in Gotham City in Flames!
What’s more, Anarky has just joined Versus mode too…

And now for the big reveal! With 25 miniatures, 4 board maps, and 13 missions (11 for Adventure mode, 2 for Versus mode), this is our biggest expansion yet, enhanced by the amazing, exclusive art of Jorge Jimenez & Tomeu Morey.

The city’s Heroes set out in search of those working in the shadows,venturing deep into a burning Gotham City. Heroes from this expansion (and from the Core Game) will hit the streets in search of whoever is incinerating criminal organizations for their own personal gain.

However, the enigma will remain unsolved as several miniatures will be placed in Mystery Boxes and only revealed in the final adventure of the campaign, which will offer several possible endings.

This campaign features a multitude of branches and a different storyline based on three variables: victories, defeats, and the Heroes’ choices. It also features optional scenarios using board maps from season 1 and 2 expansions.

A progression system will enable each side to become stronger as they progress through the scenarios. Additionally, victory points will be won through the achievements of both teams, as well as by successful feats inherent to each adventure, rewarding the heroism of certain players and the deviousness of others.

Useful for both beginners and experienced players, this box will include skill sheets for all the Heroes (more than 80!) and give players access to all the information about their character. These cards are slightly smaller than the hero sheets from the game.
It will also contain revised rule booklets and missions by Paul Grogan’s team, along with new game aids covering everything.

“Narrow Chronicles,” episode 2, spanning 4 adventures, will allow the players on the Heroes’ side to temporarily don the Supervillains’ costumes. ​

This time, the city’s criminals will take on each other in adventures under the reign of Poison Ivy, with each adventure offering the chance to rally their opponents to the cause!

𝘈 𝘕𝘦𝘸 𝘌𝘥𝘦𝘯 is a chance to use the content from seasons 1 and 2 by playing their different supervillains.​Each adventure enables the player taking on the role of the Villain to choose the antagonist from a range of different options (and versions).​

This game mode uses A.I. to make all scenarios in the Adventure mode playable without anyone taking on the role of the Villain and battling the other players.
Each mission is comprised of a deck selected from around 100 available cards, which dictate the behavior of both the henchmen and the supervillains in order to best adapt the A.I. to the objectives of the mission. Each iconic supervillain also has their own card, making each mission even more dynamic.

Jason Keeping, the author, drew on several hundred matches as well as feedback from the community to hone his game mode before polishing and simplifying it in collaboration with our teams. The solo-mode rulebook will be written by Paul’s Grogan’s team to match the quality of our new rulebook. This mode can be used with all the Adventure Mode scenarios from seasons 1, 2, and 3, even for the official scenario from our The Overlord magazine! As a result, more than 60 scenarios will now be playable in either solo or cooperative mode.

We couldn’t resist adding this supervillain to the Versus modepicking zone (but perhaps you would like even more “newcomers” added during the pledge manager?). Lonnie Machin, a gifted teenager who misguidedly believes he is the Joker’s son, is a soldier of anarchy and uses the gadgets he invents to attack all forms of authority – particularly those managed by the government. He also founded Utopia, beyond the tunnels of the first subway network in Gotham City. This neutral, autonomous community grows its own food thanks to a horticultural lighting system devised by Leslie Thompkins, Harper Row, and Spoiler.

However, Batman is not welcome there, as Anarky sees him as a representative of the world on the surface and the defender of an old-fashioned set of values.

The references to the first two seasons will be available during the Pledge Manager. We thought it was important to enable new arrivals to discover our add-ons to season 3 before letting them explore the previous versions during the Pledge Manager, without feeling overwhelmed by an overly vast range of options.
As you can use Versus mode for group combats, the Batmobile, Arkham Asylum, and Suicide Squad, you’re only just beginning to discover the world of Gotham City!

Several weeks after the Kickstarter campaign closes, we will open the pledge manager, a platform where you will have to fill in your shipping details, choose or edit the contents of your order, and pay the shipping costs. We have done everything to find the best compromise between price and service in this Covid-troubled period. For some destinations, the fees are still high, but they are the only ones we have been able to obtain that meet our requirements.

We have always favored a relationship of trust with our backers, and we know how worried some of them are about the cost of transporting the containers (freight) to the hubs, following other (external) projects that have seen their announced prices tripled on shipping costs.

We have already included the cost of this freight directly into the cost of our products for you by calculating a base of 20K dollars per container, which is what they cost during the peak of the Covid crisis (a price that has since come down a bit).

The shipping costs in the table below are very reliable estimates that could vary by a maximum of a few euros (up or down). They take into account the annual inflation of logistics costs, and any Stretch Goal you should benefit from.

We regret we are unable to ship to PO Boxes, and to the countries below this list :

Note that, in compliance to the EU and UK laws, VAT will also be charged on the pledge manager system for EU and UK backers. At this time we cannot estimate the cost as the charges vary from country to country and it is based on the price of the order plus the actual shipping costs (which can only be properly determined in the system). VAT varies between Board game and Role-playing game :

– For the board game material, the average VAT in Europe is 19%.

– For the RPG material, the average VAT in Europe is reduced, at around 5%.

However, rest assured that the full VAT to be charged on each pledge will be clearly displayed in the pledge manager system before final confirmation. European countries that are not part of the European Union or UK will not be charged VAT.

Monolith is a company founded in 2014. Since then, Monolith has created and successfully delivered 10 top Crowdfunding/Kickstarter projects driven by one goal: to create immersive games served by great gameplay mechanics and topped with high-quality components such as Conan, Mythic  Battles, Batman: Gotham City Chronicles, Claustrophobia 1643 and Capitaine Vaudou.

We strive to work with our community to ensure that the lines we develop continue to thrive long after our games are released, both through The Overlord forum (https://the-overlord.net) and through the many creative tools available, such as our online scenario editors.

Many thanks to: All our playtesters, families & friends. A big thank you to all our fans all over the world too!