By the team behind The Great War on YouTube. Rhineland 45 covers one of the largest battles of WW2

Back the campaign now and help us reach our stretch goals so we can bring you an even better documentary series filmed in luxurious 4K! 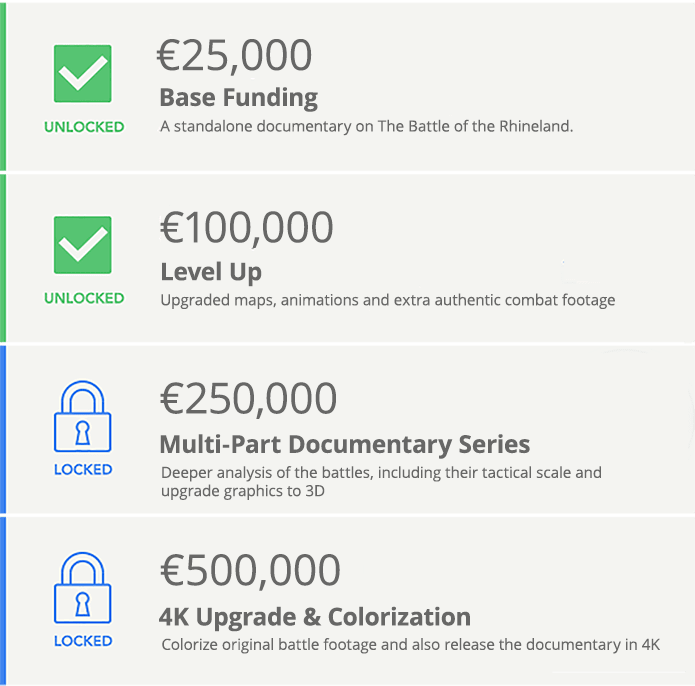 RHINELAND 45 – DECISION IN THE WEST

The Battle of the Rhineland was one of the largest WW2 battles the Allies fought on German soil and part of the critical final campaign against Nazi Germany on the western front. 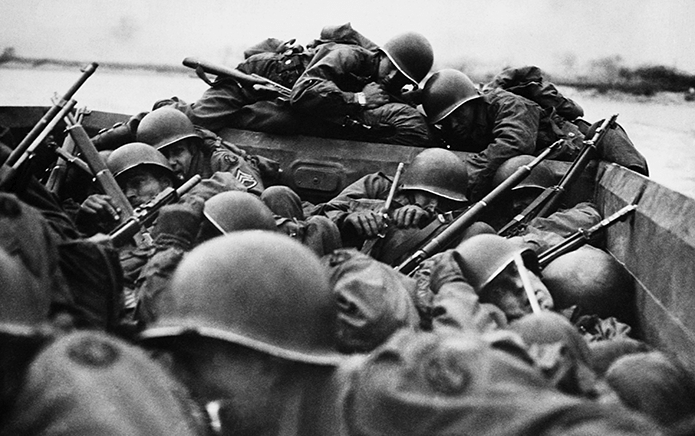 The Battle for the Rhineland was a series of operations in early 1945, the dramatic finale of the Allied advance from the coast of Normandy to the borders of the Reich. The desperate German forces had managed to form a last line of defence with their backs to the Rhine – the famous river that stood between the Allies and the heart of the German Reich. 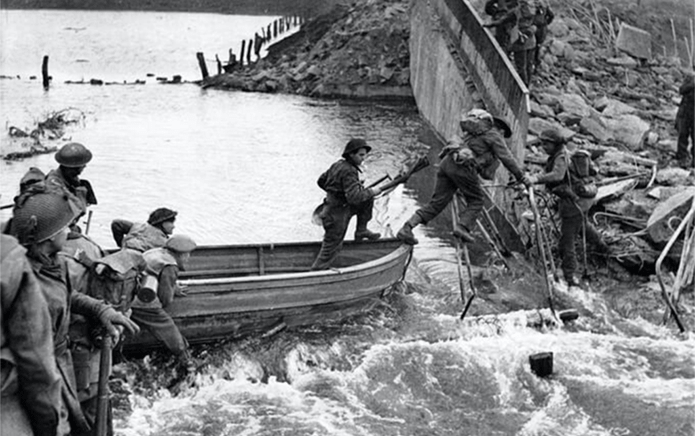 Today the Rhineland campaign (Operations Veritable, Grenade and Plunder/Varsity) is often overlooked when we remember the last weeks of World War 2. The operation and its results were already hotly debated among the Allied generals while the war was still raging. In popular memory, the Rhine crossing is mostly associated with the Bridge at Remagen the popularized narrative we know from the movie with the same name – though the brunt of the fighting happened further to the North in the Rhineland region. 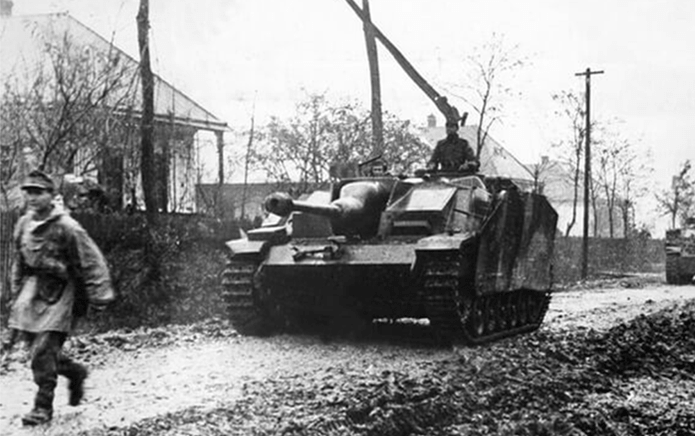 German Sturmgeschütz III moving to the Western Front in December 1944.

75 years after this battle, its history needs to be preserved and retold for a new generation. This kind of documentary can only be made through crowdfunding. Neither the traditional broadcast companies, TV stations nor YouTube would be suitable for our vision. We want to tell the story of this battle as accurately as possible without any interference or content restrictions.

Origin of the Project 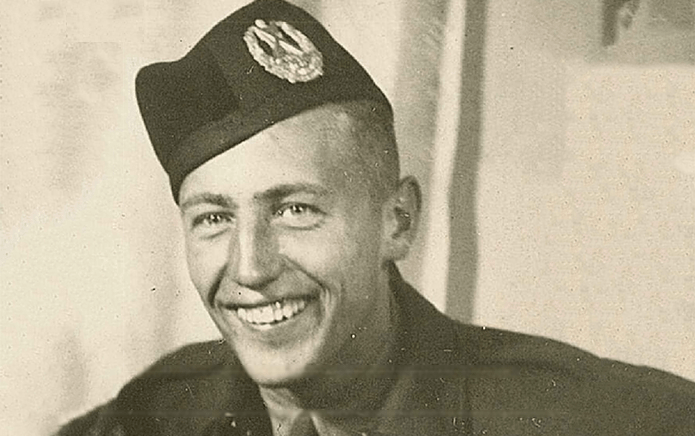 Jesse’s grandfather served with the Cameron Highlanders of Ottawa during the Rhineland campaign.

When we worked on our Battle of Berlin documentary (16 Days in Berlin), everyone in the team got a little curious: What did our family do in the late phase of the war? We all have family members who served in World War 2. Jesse, our resident historian, knew that his grandfather James served in a machine-gun team with the Cameron Highlanders of Ottawa in France and Netherlands. But then we realised he also fought in the Rhineland campaign in February and March 1945, even though he didn’t talk much about it. This was a campaign we also didn’t know much about before and when we understood the scale and the significance of it, the idea for this project was born. Jesse’s grandfather’s unit will be a part of the documentary of course. 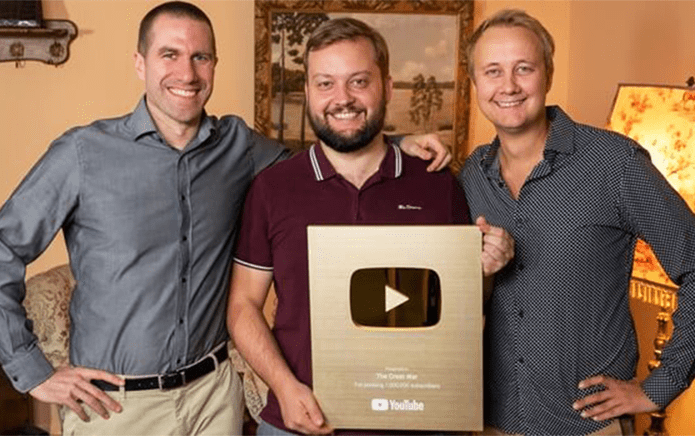 We are Real Time History, the team behind the successful YouTube channel The Great War and the groundbreaking documentary series 16 Days in Berlin. We have produced well over 100 hours of high quality history documentaries over the past years and over 218 million views!

Host and researcher Jesse has an MA in history and has been studying early 20th-century history for years. Additional support comes from our international network of scholars and experts that will provide insights into complex topics such as combined arms warfare or the last efforts of the Nazi regime to stay in power. 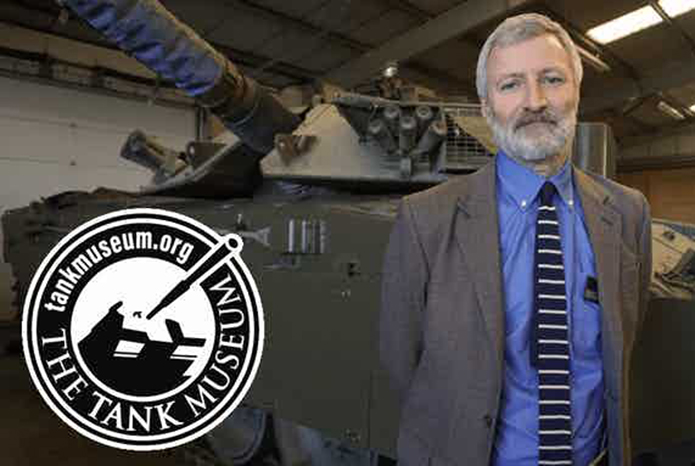 The Tank Museum in Bovington, United Kingdom, houses one of the best collections of tanks in the world, with of over 300 tanks and armoured vehicles that tell the story of more than 100 years of tank warfare. As a British museum their collection features some of the types of vehicles that fought in the Rhineland 1945 such as the M22 Locust or the Comet tank. Their vast collections and archives include not just tanks, but diaries, photos, firearms and equipment that was used in World War 2. With their expertise and resident production crew, they will support Rhineland 45 – and your contribution will also support our work here at the Tank Museum during a year where the support for museums is more important than ever. 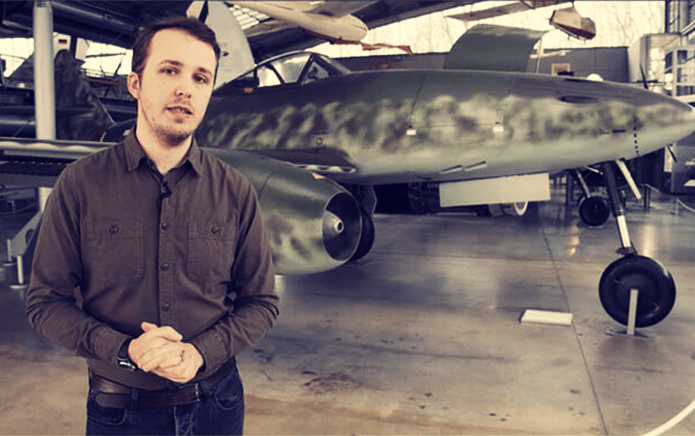 Christoph Bergs, aviation historian and YouTube creator, stands in front of a German Me262.

Christoph Bergs is a military aviation historian and has his own YouTube channel where he climbs into the cockpit of legendary aeroplanes. Chris will lend his expertise about aerial warfare. The battle for the Rhineland included extensive strategic bombing and one of the biggest airborne operations in history. 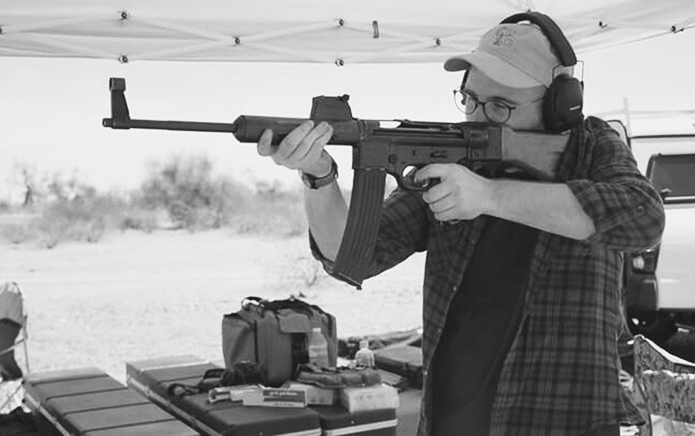 Matthew Moss is a firearms historian and will explore how and with what the soldiers in the Rhineland campaign fought.

Matthew Moss is a military historian and author. He has written several books and runs historicalfirearms.info and the YouTube channel The Armourer’s Bench, both projects look at the history, development and use of weapons in war. Understanding the weapons and equipment soldiers’ used is instrumental in understanding how they fought, Matthew’s expertise will help us explore the weapons that shaped the Battle for the Rhineland.

Each reward includes digital access to the documentary. You will be able to watch it on any internet connected screen, from your smart phone, tablet, laptop and smart TV. 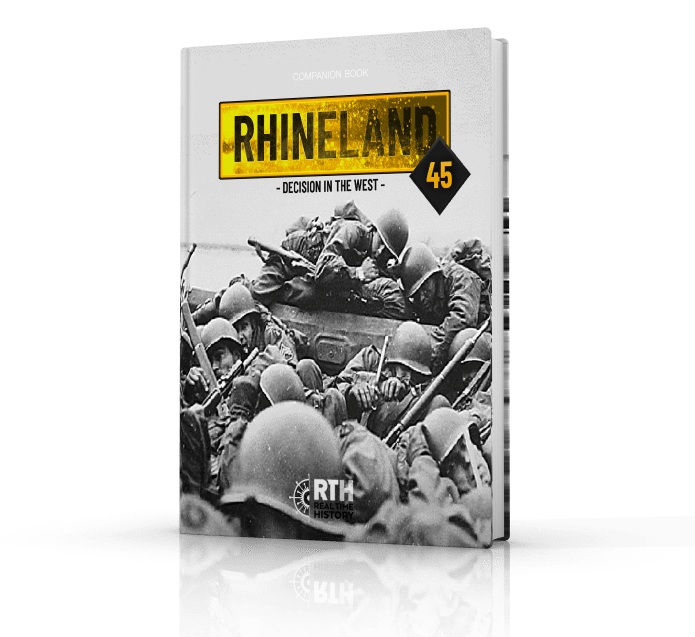 Our Official  Companion Book will be the ultimate companion to the documentary and will contain maps, notes, photos and complementary material to the documentary. This book will help you discover the battlefield for yourself. 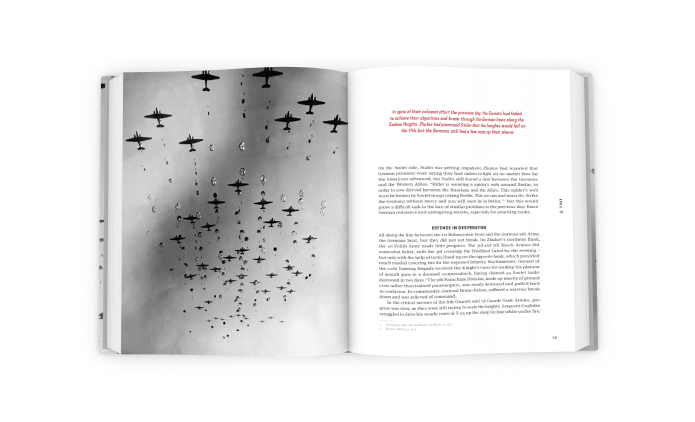 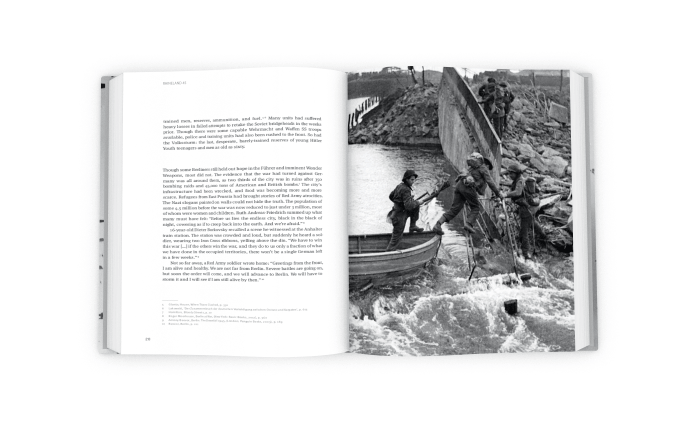 Join the Real Time History production team and get exclusive access to production live streams, behind the scenes footage, and archive material. This is like watching the DVD extras while the documentary is being made! Watch day-to-day progress and interact with the crew. Gain insight into the creation process and contribute ideas

BATTLE OF THE RHINELAND VIRTUAL TOUR

In a year where travelling is a bigger challenge than usual, we’re offering an exciting interactive virtual battlefield tour of the Rhineland battlefield with Jesse Alexander. In this streamed and guided tour we will show you the actual battlefield and its intricacies. Also includes streaming the documentary and behind the scenes access.

Stream Rhineland 45 once it’s available AND get access to our previous documentary series 16 Days in Berlin – an 18 part, 5 hour long documentary about the Soviet attack on Berlin in April 1945 (unlocks after the campaign ends).

Preserve the memory of a loved one for future generations of your family. This is your chance to commission and help develop a short documentary to be filmed and produced by the team behind The Great War about a relative who fought in WW1 or WW2. As part of the team you’ll be involved in the research and development of the film and receive Executive Producer credit for your role in the production.

We’ve created rewards we think you’re really going to love: digital access passes, behind the scenes access so you can see how the documentary production process works and contribute ideas, special virtual tours of the battlefield, our Official Companion Book, and you can even commission us to make a documentary about a relative of your who fought in WW1 or WW2.

To tell the story of RHINELAND 45, we needed at least €25,000. But as with  Now, as with every part of history, there are always more facets, more details we want to talk about. With every contribution, we have the opportunity to invest more in maps, animations, historical footage and original research. Our stretch goals illustrate what we could do with that extra support.

We’ll have a higher budget for maps, animations and finding more authentic combat footage – all of which helps bringing the history to live while making it easier to understand.

This will enable us to produce a proper documentary series again, with 5 one hour long episodes that detail the different phases of the battle. With this budget we wouldn’t be limited to retelling the events but could spend time with deeper analysis of the battles, zoom in to the tactical scale of the battles and really upgrade our graphical capabilities to the next level – 3D!

Historical Footage is expensive and with with level of funding will enable to colorise and also release the documentary in 4K. With new AI technology we can colorize the black and white footage from the battle. To  but to recreate the colors accurately, this extra funding will give us the manpower, but the to produce results that will bring you closer to the battle than ever before.|

This campaign is very much a response to YouTube’s moves against hate speech which inadvertently hit genuine, high quality educational content.  These topics are not advertising friendly. And that’s why we’re seeking funding via this campaign.

Before founding Real Time History with Toni Steller, Florian produced The Great War YouTube channel since its inception. Flo is a native Berliner and responsible for content planning and community management, both vital to the success of the The Great War. Flo has an MA as Creative Producer from the Zurich University of Arts and a BA as Online-Editor from the University of Applied Sciences Cologne.

Toni Steller has been working in the TV and online video industries in Berlin for over ten years. As a trained and state-approved audio-visual media designer, he worked for popular TV productions in Germany as producer and director. Toni has been behind the look and feel of The Great War since the very beginning. Beyond the studio, he successfully transferred the show’s characteristics to the outside world when The Great War was filmed in museums or former battlefields.

Jesse Alexander is a historian, educator and higher education professional based in Vienna, Austria. He holds a BA in History from the University of Ottawa and an MA in Modern History from the University of Vienna. His focus is conflict in the first half of the 20th century. He has worked as a researcher and educator with Canada’s Cold War Museum, the Canadian Museum of Civilization, the Canadian War Museum, the National Research Council of Canada, le Centre Juno Beach, le Mémorial national du Canada à Vimy, the Library of Parliament of Canada and more. With his passion for presenting history to a diverse audience, he recently joined The Great War as the new host and lead writer and with his ability to speak English, French, German and Russian, he brings an international perspective to the project.

Dan is a creative entrepreneur, producer, and qualified teacher. Dan has produced several hit podcasts including ‘You’re Dead to Me! for the BBC, and his shows have had 10 million downloads combined. Dan has organised events at Downing Street, raised £1M with crowdfunding, and was a co-founder of History Hit with Broadcaster, Dan Snow. In 2017 Dan headed Crowdfunding and Community at Dig Hill 80 – an archaeological excavation of a WW1 battlefield in Wijtschate, Belgium that recovered the remains of 135 soldiers. He has a BA in Communications & Audio Visual Production from London Metropolitan University, a Post Graduate Certificate in Education.

Whether or not you can make a financial pledge at the moment, we’d still really appreciate your help in spreading the word about the Rhineland 45. You can do this by sharing this page via social media, or mentioning the documentary and book to your friends. Thank you!