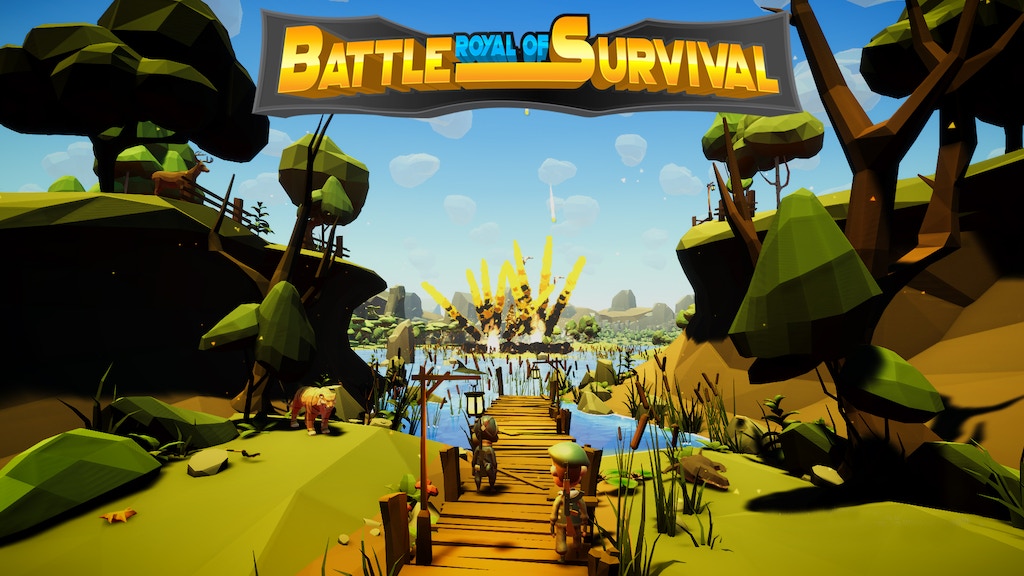 Like the name suggests Battle Royal of Survival (BRoS) is a multiplayer survival game. As a „solo-squad“ or together with your friends you can  join the battlefield as one of the 8 unique characters. Explore the low polygon graphics world that is home for hostile and  friendly NPCs as well as animals wandering in the wildernis.

It is about survival!

Up to 60 players fight for survival on Jakairo Island. On the map you can find different firearms and explosives with different rarities. You can also discover raw materials which are used to craft new items. Animals also drop useful crafting items.

You can level up your profile and receive accomplishments and rewards in daily, weekly and Co-Op challenges . We will add a solo and team ranking system for you to prove your skills.

BRoS is currently planned to be released on Steam (Windows). With enough funding, we would like to port the game to other platforms (Android, IOS, PS4, XBOX, Switch, etc.). The game will support gamepad and keyboard input at launch and will be released in English, but we may add further languages in the future.

We have been working on BRoS for over 2 years now. The game is ready to play online but the following points need to be improved and completed:

We are two brothers, a duo from Germany, that are devoleping the game parallel to our main job. Our knowledge of programming and designing and  our passion for gaming brought us to the idea of BRoS. What started as a  small idea is now our biggest project with serious ambitions to create a  special gaming experience. We would like to take this path and approach the project full-time. We have already founded a small company named PaintCube and made use of external help and  would be pleased to receive further support.

To develop such a project, it needs not only technical knowledge but also feedback and supports from interests. For this reason we see Kickstarter as a way to introduce this project.

To date we have received feedback from our circle of friends and acquaintances. We would like to develop the video game together with your help and therefore we would like to be more responsive to your feedback. While there is a good amount of interest from publishers for BRoS, we would love to stay independet and finish the game with complete creative freedom.

The financial support of Kickstarter would mostly be used to cover the living costs of PaintCube for the end of development and to pay some additional employee for music and sound. If the campaign is overfunded we have lots of ideas for stretch goal.