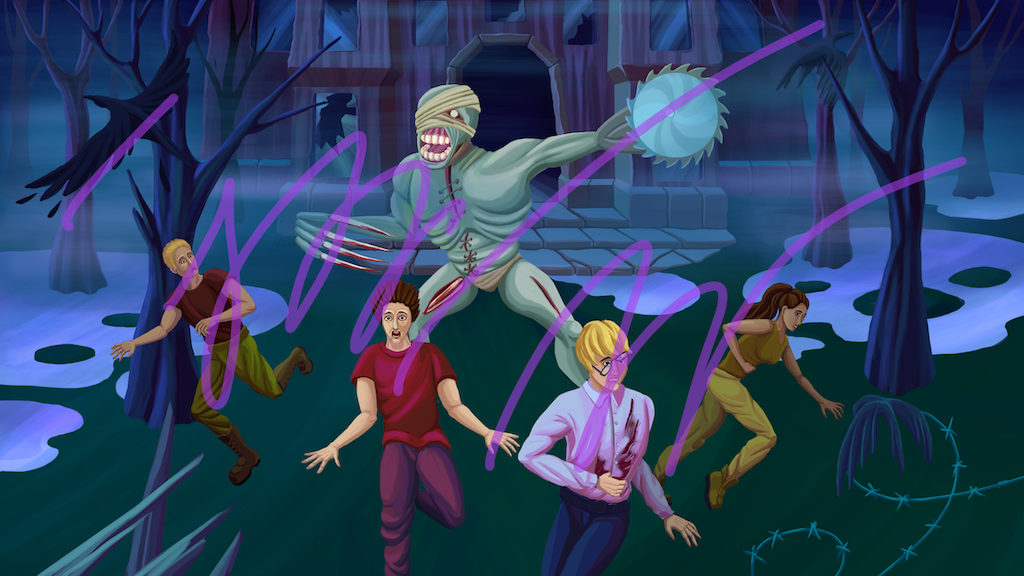 A new asymmetrical 1 VS 5 battle arena game. As a mutant Zombie, find and kill. As a human, hide, fight, and survive.

The project we going to do

A brand new asymmetrical battle arena game, non-pay-to-win,  purely based on player skills and strategies. The game will launch on both PC and Console platforms.

A group of ordinary people is being kidnapped by a mysterious powerful organization called “The Dawn “and taken to an obsolete mansion in an unmanned mountain.  When they wake up, they found that there is a dreadful monster hiding in the dark and hunting them.

They try to escape the mansion, but soon they found that all the exits and gates are closed and sealed. When they are desperate, a voice sounded in the mansion, the voice tells them that if they can survive within their specified time, they will be released, also there is still an exit available in the mansion, but it’s hidden, they need to find it out, and unfortunately, if one of their teammates is killed by that monster, their teammate will become another monster, run and survive!

The objective of Zombie: Kill all the humans, turn all of them into zombies.

The objective of humans: Survive 8 minutes or Escape through the exit.

All the gates and exits are closed and sealed, but there is one exit left hidden. It will not show up until the human faction opens four machines. It shows up in random locations. There are six machines randomly located on the map.

The mansion has two floors and many different rooms. Most of the rooms contain doors, some rooms even contain cupboards, wardrobes, and beds. The doors can be opened and closed. Humans can hide in the room, in the cupboards/wardrobes, and even underneath the bed.

Zombies move quicker than humans. Zombies and Humans all have the abilities system. Zombies have two active abilities. Such as: “Speed Up: the zombie moves 150% faster for few seconds”, ” Pounce forward”, “Hook”, ” Silence”, “Charge” and etc.

Humans have one ability, either a passive or an active ability. Such as: “Dauntless: taken less damage from zombies”, ” Tenacious: has more health”, “Jump forward,” etc.

There is also a talent system for both zombies and humans. Players can choose different talents according to the zombie/human character they want to play.

What makes our game different?

1.  Once a human is killed by the Zombie, the human will turn to Zombie, and the objective also changes to kill the remaining humans. As the game goes, Zombie faction may get stronger and stronger, and the game gets more intense. It could end up with five zombies looking for the last human remaining, but as long as the human survives until the time ends, the human wins.

2.  The humans would not just run and escape. They can pick up weapons from the machines to fight the zombies, like melee weapons and guns, humans can kill the zombies, but the zombies will revive after a few seconds.

3. There are props hidden in boxes in different places on the map. Humans can open up the boxes and pick up the props and use them. Other props have different effects like “Stealth”, “Ghost Run”, ” Health Restore”, “Invincible”, ” Bullet Knockback” and etc. Humans faction players can manage to use these props according to your own strategy, and fight the zombies and survive.

The project currently is in the pre-start phase, we need starting funds in order to bring this game to the real world. Once the fund goal is reached, the project starts. All the fund goes for the development of the game(including labor hiring, office renting, software license, hardware purchase, etc). The anticipated development time is one year.

The Sketches of some Zombie Characters designed:

We plan to make 1 to 3 maps, 4 to 8 zombie characters, 10 to 15 human characters for launch depending on the fund amount. The more funds we get, the more content we can make.

Once the project starts, we will keep updating development information in the Kickstarter weekly, including maps, zombie characters, human characters, gameplay and reward information.

As a backer for this project, if you have any good ideas for anything of this game(maps, zombie characters, human characters, gameplay, skins), leave in the comments, we will take consideration.