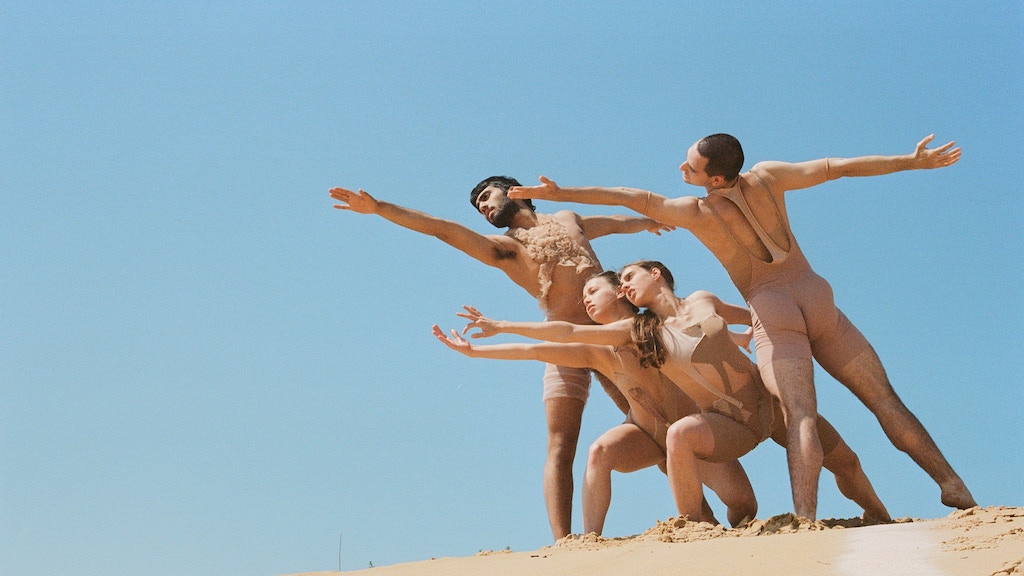 In order to make this journey happen we humbly ask for your support to raise money for both our domestic and international collaborators and the production. Your support goes directly towards airfare, artist compensation and set

We are conditioned to perceive borders where there may actually not be. If one observes the horizon long enough, the experience may feel like the border between the earth/ocean and the sky dissolves. Therefore, the question arises that if we experience something long enough (such as the body, an artwork, or even a societal structure) are we able to dissolve our learned borders/edges in order to ultimately be free?

BORDERLINE  brings together five performers to explore the distance between themselves and the audience. A study on distance which focuses on the point of view of systems: the systems in which we live, being a number on paper, a number in a passport, etc. We must break the conditioning that creates distances between the self, people, cultures, and humanity

We are all foreigners, to each other and sometimes even to ourselves.

After being four years with The Batsheva Ensemble, under the direction of Gili Navot, performing works by Ohad Naharin, Sharon Eyal, Noa Zuk, Bobbi Jene Smith & Or Schraiber, as well as developing four creative processes as part of the Batsheva Dancers Create program, Cesar embarks on his own journey as an independent artist. He seeks to make the dream of bringing his work to his hometown and to continue expanding his horizons with his own culture and beyond

Originally from Mexico City, is a multidisciplinary queer artist

His work combines movement, performance, photography, and film in an attempt to study the limitless physical potential of the human body and its connection to the earth.

The constant search for endless freedom, distance and the notion of the self are all ideas César constantly studies. He does so through artistic practices he’s discovered, implementing them into his daily life.

Cesar graduated with honors from the Peridance Capezio Center Certificate Program, they have belonged to different companies in his journey such as Gallim Dance under the direction of Andrea Miller.

He has been based in Israel since 2018, working with Batsheva Dance Company- The Ensemble​, under the direction of Gili Navot, performing works by Ohad Naharin, Sharon Eyal, Noa Zuk, Bobbi Jenne & Or Schrieber as well as developing 4 creative processes as part of the Batsheva Dancers create program

As a director, his first short film entitled ‘Are you holding me, or am I holding myself?’ Made in 2017, was presented and winner of several national and international awards in countries such as the United States, Canada, Scotland, and Europe, being part of the short film corner at the Cannes Film Festival.

A Native of Sherbrooke, Québec, Béatrice Larrivée studied ballet at l’École Supérieure de Ballet du Québec. In 2013, she moved to Vancouver to attend Arts Umbrella where she had the opportunity to perform works by Crystal Pite, Sharon Eyal, Aszure Barton, Lesley Telford, Marie Chouinard and Tom Weinberger amongst others. Béatrice moved back to Montréal in 2016 to join RUBBERBANDance Group under the direction of Victor Quijada. She also works as a freelancer for Compagnie Marie Chouinard. Béatrice danced for Batsheva-The Young Ensemble from 2018 to 2020.

Guy was born in Tel Aviv in 2001. He graduated from the school of arts and Ironi Alef high school of arts in Tel Aviv. He danced in “Bikurey Ha’itim” dance school (2015-2018). Participated in Batsheva summer courses between the years 2015-2019. Winner of the ‘Amsterdans’ competition in Amsterdam in the contemporary solos category for pre professionals. Won 1st place in the solos category and 2nd place in the choreography category in the department of education’s annual dance competition for excellent students (2019). Serving as an outstanding dancer in the IDF. Joined Batsheva – The Young Ensemble as an apprentice in 2019, and as a Dancer in 2020

Alma Karvat Shemesh was born in 1998 in Tel Aviv, Israel. She graduated with a dance concentration from the Thelma Yellin High-School of Arts. In 2014-2017 Shemesh participated in several summer courses including the Batsheva Dance Company summer course, the HJS summer course in Amsterdam, the Batsheva Program for Outstanding Dance Students and the Yasmeen Godder summer course. She served in the IDF as an Outstanding Dancer and graduated from the Maslool – Professional Dance Program Bikurey Ha’Itim directed by Naomi Perlov and Ofir Dagan. As part of her studies at the Maslool, she was selected to participate in Context Festival in Saint Petersburg and Moscow. In addition, she created a solo which represented the Maslool at SEAD- the Experimental Academy of Dance in Salzburg, 2018. She joined Batsheva- The Young Ensemble in 2018 as an apprentice, and as a Dancer in 2019.

Tom Nissim was born in 1998 in Israel. He graduated from the Jerusalem academy for music and dance. He danced in “Hora Jerusalem”, and participated in the Batsheva Dance Company excellence program for 2 years (2014-2015). He participated in the HJS summer course in Amsterdam, and studied a year in the Maslool – Professional Dance Program Bikurey Ha’Itim directed by Naomi Perlov and Ofir Dagan, Tel Aviv Jaffa. Serves in the IDF as a privileged outstanding dancer. Joined Batsheva – the Young Ensemble in 2017 as an apprentice and as a Dancer in 2018.

slowdanger is a multidisciplinary performance entity based out of Pittsburgh PA, founded by taylor knight and anna thompson. They build saturated sound and performance worlds through the use of embodiment, technology, vocalization, electronic instrumentation and dance performance frameworks. From directing music videos to scoring plays, slowdanger transforms their shape to adapt to a variety of different containers.

Their work has been featured across the U.S. and Canada in venues ranging from proscenium theater and gallery to nightclub and dive bar. Throughout their extensive and eclectic performing career slowdanger has opened/shared the stage with notable music acts such as Yaeji, Abdu Ali, serpentwithfeet, :3lon, the Moon Baby, and more. They have created scores for dance/theater for Gibney Dance Company, Mark Caserta, Francesca Harper, MICHIYAYA Dance, Bill Shannon, Sidra Bell, Dorchel Haqq, Nile Harris, Sebastian Abarbanell and have licensed their music for performance to Alvin Ailey II, The School of American Ballet, Ballet X, Maleek Washington, and Christian Denice, amongst others.

Their dance and sound work has been shared/featured internationally at venues and festivals such as Hot Mass, Honcho, Detour, Kahlon, VIA Festival, Usine C, Place des Arts, Dance Place, the Kennedy Center, the Carnegie Museum of Art, Carnegie Music Hall, the Andy Warhol Museum, and the Museum of Modern Art. They were one of Dance Magazine’s 25 to Watch in 2018 and creatives in residence at CMU’s Frank-Ratchye STUDIO for Creative Inquiry in 2019. Currently, they are on Modern faculty at Point Park University’s Conservatory of Performing Arts and resident artists for the Clarice Smith Performing Arts Center 2022-2023 to create a new work, SUPERCELL, in partnership with the Kelly Strayhorn Theater.

Avi on was born in Acre in 1991 and moved to Tel Aviv in 2014 and worked as a stylist and V.M manager at CASTRO for 3 years. Avi graduated in 2020 from Shenkar College of Engineering & Design. During his years at Shenkar he got the chance to take part in Shenkar’s fashion show at TLV Fashion week of 2017,2018, 2019) and showcase his works. In 2017 he did an Internship For Vivi Victor Bellaish, winner of 2018’s Fashion designer in Israel and Companionship of Vivi Victor Bellaish in the exhibition of “Je T’aime”, Ronit Elkabetz, recognized worldwide, in the year 2018 one of his garments was chosen to take part of the “Nude, Naked” exhibition and in 2016 he Presented his clothes & photography at “Hastudio” exhibition. In his last year at Shenkar Avi created a new men’s Lingerie collection