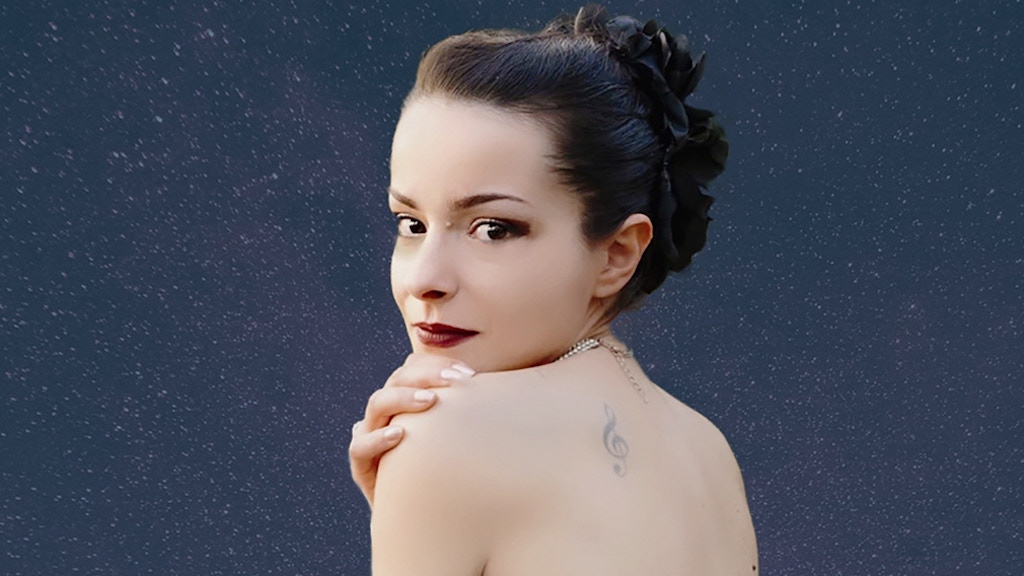 Italian soprano opera singer LUCIA RUBEDO meets some real milestones in the history of musicals, film soundtracks and even pop

A talented Italian opera singer meets the history of musicals, film soundtracks and even pop in her first album “Canto”

Hi everybody! My name is Rubedo… Lucia Rubedo 😉 I’m a soprano opera singer from Italy, the singing’s motherland, and indeed the title of my upcoming album is… “Canto” which in Italian means both “song“ and “singing”!

Singing is emotion, energy, dream. I never stopped dreaming and feeling, since I was a little girl in an orphanage in Cremona, the city of violins, where I could listen, not visible due to the high walls that surrounded me, magnificent voices singing incredible melodies coming from the city’s conservatoire. I grew up performing songs I deeply loved, even outside the classical music repertoire as such, as they not only left a deep mark within myself, but also in popular and musical culture as a whole.

“Canto” is my first album, following years of concerts, not to mention years of study at Giuseppe Verdi Conservatoire in Milan, one of the most important music academies in the world, where I was awarded with my Diploma in Lyric Opera Singing.

About a year ago, I started collaborating with Fabrizio Campanelli, a notable Italian composer and producer of film music and songs. He’s become my producer and we’ve begun creating my first album and plannig the right repertoire for the new concerts.

The album “Canto” includes musical pieces that have entered everyone’s heart and memory, as well as being milestones in the field of music for movies, musicals, and pop music itself:

To get all the depth of these great tracks in their full glory, I need the support of a symphonic orchestra able to convey all the magic and the emotion that only an orchestra can bring, not to mention the videoclip and everthing is needed to set up the following tour.

And… that is how this Kickstarter was born!

The Czech National Symphony Orchestra of Prague, is an orchestra in which Fabrizio Campanelli, my producer, often collaborates for his musical scores and they have also played for Ennio Morricone in the score which has won an Oscar for Hateful Eight by Quentin Tarantino.

The conductor of the orchestra is Enrico Goldoni

and the sound Engineer and mixer is Goffredo Gibellini, who has mixed some of the most important film scores for Italian and international films.

All the artworks of the project are by Silvia Provantini, a gifted Italian artist. I deeply love art, paintings and drawings and I have been given the honor of being portrayed by her. This led to the artworks for the booklet and to the Fine Art Print that will be included among the rewards only for kickstarter backers

— First of all, in many choices you’ll be able to find an extra song included in the SPECIAL EDITION released ONLY FOR BACKERS of this kickstarter. This special edition will never be published or sold through official physical and digital stores.

— Italian artist Silvia Provantini designed the artwork of the project, including the booklet and my full portrait in a FINE ART PRINT ON CANVAS 42×29,7 cm / 16,5×11,5 inches (the frame is NOT included in the reward!)

I love art, drawings, paintings and even if I’m not a painter, when I don’t sing, sometimes I love… sketching! Among fantastic mythological animals, I love the  legendary PHOENIX! I feel very close to it. I dreamed one, I sketched it on a sheet of paper and it became my personal logo and… yes, there’s my name hidden inside it too! Can you find it?

I put it on my T-SHIRT (will be available in white or dark blue or black colours, just tell me your favourite colour, size and gender :)) and…

… on my HAT!  (available in white, blue navy or black colours, just tell me your favourite one).

As an artist, I believe we receive music from the stars and one of my favourite recurring themes in my sketches are STARS indeed! I drew a little rounded one and it became a little but precious gift I’ll include in the GOLDEN BOX:

a beautiful little PENDANT made of pure 18-karat pink gold, made by a craftman in Tuscany based on my sketch!

Once the project will be completed, we’ll be celebrate it with a concert at Antonio Belloni Theatre in Barlassina (MB), Italy (a small town close to Milan).

This is  somewhat I feel as my second home and I’ll be so glad to perform the entire album concert for the first time ever, a PRIVATE PREMIERE exclusively for you at the theatre in a private version of the concert. We’ll be able to share music, art, food and for 2 people… …MY PRIVATE BACKSTAGE in the smallest, and most intimate and beautiful Opera Theatre in this crazy world. WE’LL SHARE THE MOMENTS BEFORE THE CONCERT and AFTER THE CONCERT TOO: you’ll be welcome in my backstage and in the large dressing room off-limits for everyone but you.

But, you know, I love singing and traveling too! So I’ll be so glad to perform a personal concert at your home (or whenever you want)! I’ll happy to reach you everywhere (everywhere it’s possible for a human being :D) with a piano player to perform an album concert, with 2 extra songs chosen by you!

Traveling costs are not included and we’ll have just to schedule the event together, somewhere between the next 12-18 months from the album release.

If A. Belloni theatre is my second home, the first one is… CANDLE STUDIO, the studio of Fabrizio Campanelli, my producer. He’s an Italian A-Class composer and producer who will take care of every detail of the project. Among the rewards, you’ll find the option to produce with us a complete master, recording a DUET WITH ME, at Candle Studio in Milan, Italy, with a piano player. We’ll choose the song together, my pianist will play the instrumental, and  I’ll be assisting and coaching to let you express at your best.

That’s all falks! See you soon!!