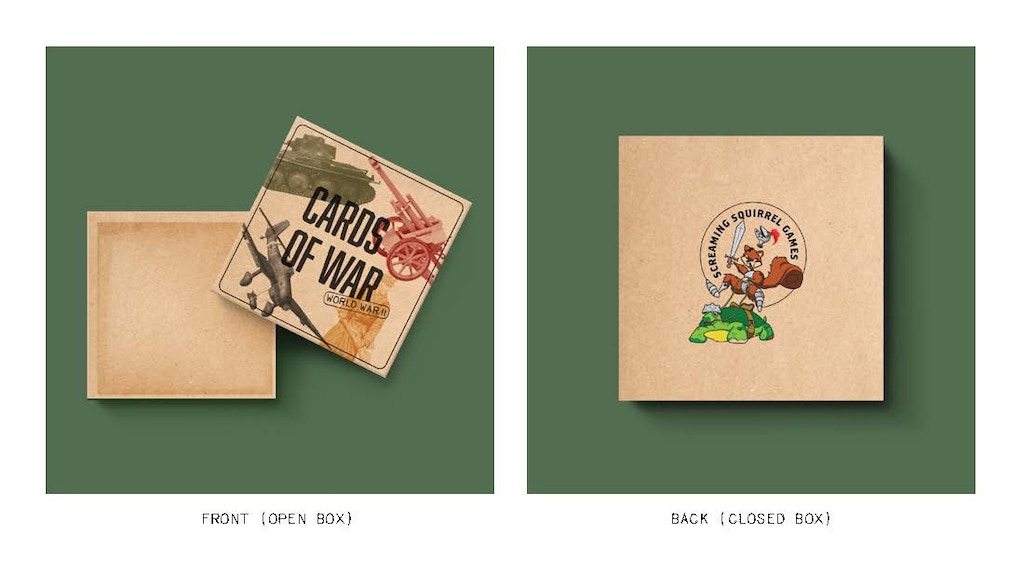 “Whoa Tim,Whoa!  Good Turtle. Greetings Generals. I am Lancelot Squirrel, your guide for this journey. Allow me to present Cards of War, World War II. CoW:WW2 is a fast paced card game pitting the Allies vs Axis in a entirely new way. Command your troops, build your factories, defend the homeland while armored units with air support tip the field of battle in your favor. Dispatch your OSS or Abwehr agents abroad to create havoc behind the lines. It’s all up to you. Are you the, victory at all costs Commander? Can you manage your industries to keep your troops supplied in the field? Sacrifice home defense for that final push to the ultimate prize of being hailed as the victor? CoW:WW2 allows you all of this and more. Will you become General Patton, Field Marshall Rommel, Field Marshall Zhukov or even Old Monty? Your destiny awaits General. Are you prepared to seize it?”

Cards of War: World War II is the first of a number of games in the works at Screaming Squirrel Games.  CoW:WW2 is a competitive card game between the Axis and Allies set in World War II.  Each player has Battle Dice, Damage and Resource Tokens, Battle Board and Germany or United States Battle Cards.

Each player draws seven cards from their Battle Decks and the luck of the Battle Dice determines who goes first. Players have choices of building their Defensive Emplacements, Industrial Zones, Headquarters and Battle Zone. Play consists of five segments: Collect Resources, Draw Card (Player may have a maximum of seven cards in their hand), Action (Play Card, Supply and Declare Attacks), Combat (Bombardment, Air Strike and Ground Attacks) and End Turn. The game continues in this sequence until Victory is Achieved! Numerous Action Cards allow the game to be played differently every time.

Battle Cards have special abilities including Blitzkrieg, Smoke, Inclement Weather, Spies, Obstacles and much much more.

Specialty Units such as the Panzer Grenadiers are able to Entrench and increase their Defensive Abilities.

Destroy your opponent from long range with a devastating Artillery Barrage!

Store your Battle Cards with Pride!

Be Listed with the Great Commanders!

Each set will receive an additional 30 Battle Cards

Each set will receive an additional 50 Battle Cards

Look for more Stretch Goals as the Kickstarter Progresses!