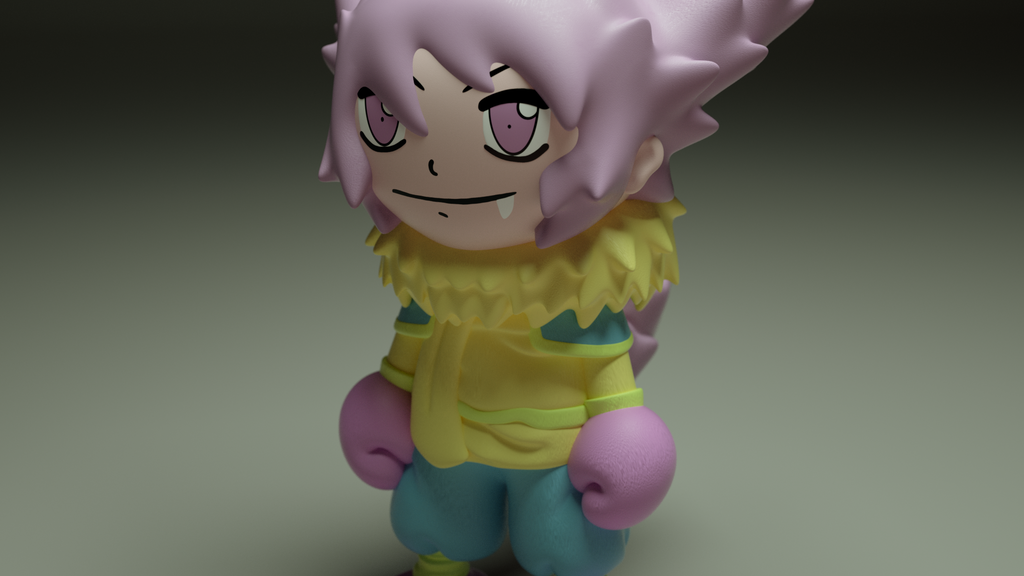 Chumina is a character I have had in my mind for over 20ish years, which just so happens to have the same name as a dog I had when I was a kid.. (Yeah, I also named the dog Chumina lol).

This character has had different shapes over the years, until around a couple of years ago I settled with this one which I consider its final form (you can check my webcomics www.rijapega.com if you would like to know a bit more about the character.)

The example above is the normal Chumina edition, but there will be different colors based on the 3d model below (Though this 3 model was changed a bit so that the arms, head and tail could move more).

Btw the inspiration for Chumina’s design are my two poms, Yogi (the one on the left) and Ruby (the one that’s not on the left haha).

Each Chumina figure is 6” tall and will come boxed.

Chumina (prototype figure) next to a Nendoroid for comparison. (The hair bangs will change before mass production, they will have more volume, similar to the Nendoroid next to it.)

The figure itself has four different points of articulation (The head, both arms and the tail) you can see it in this video.

Here is where the fun part comes! One of my favorite part of art toys is the different colors/editions each sculpt has, they are just so fun and cool to look at, and that will be the case with Chumina too! (With your help of course).

I have 7 designs planned that will be unlocked as we progress towards the Kickstarter goal.. And when we get there.. Let’s just say more surprises are to come! 😉

This is another edition of a Chumina figure, using a different coloring scheme based on the Hokusai wave, that’s why I called it Hoku-chan. (*Hoku-chan is still in the prototype version, so it might change it’s pattern a bit).

Here you can see the different steps that were taken in the making of this Chumina vinyl figure.

I first made a quick doodle, then I drew it digitally, I commissioned a 3d file, then the manufacturer made some changes (e.g. the hands were separated so they could move) and finally the prototype which will still have some minor details changed. (Some minor changes will still be made before mass production).

The final step would be mass production, and this is where you can help!

With your help we can unlock more and more new Chumina designs!

*These are the sketch and a prototype of the 3d model I colored myself, so the final product will be a bit different. Also the colors will be more vivid, kind of like this: