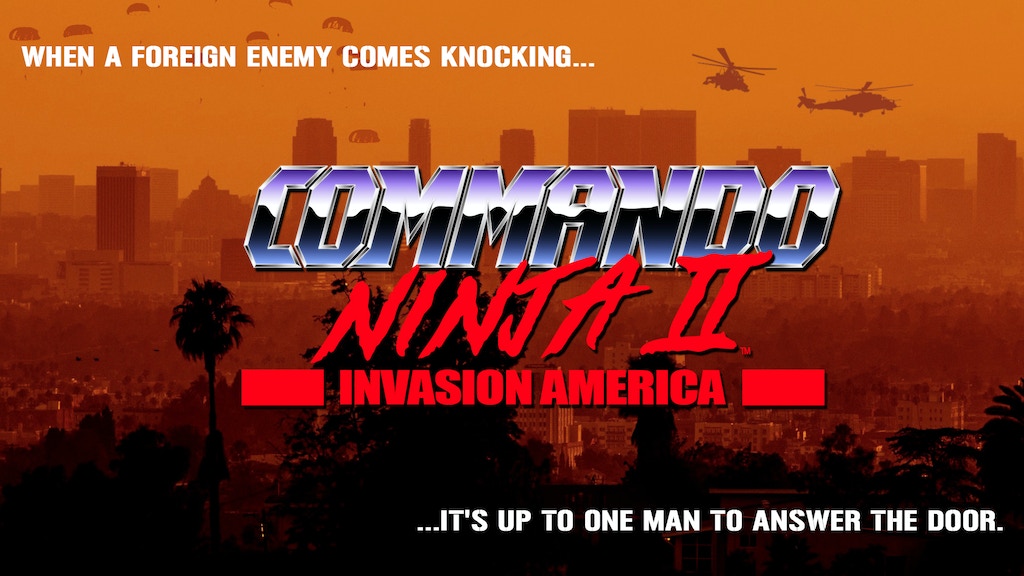 Commando Ninja II: Invasion America is an indie over-the-top Action / Comedy feature, a tribute to the Action Hero Movies of the 1980s.

COMMANDO NINJA is a 2018 indie movie funded on Kickstarter. We had over 5 Million views on Youtube, it was dubbed and translated into 7 languages, and was supported by Kung Fury’s creator David Sandberg!

Our movie was screened all over the world in theaters, festivals, and was acclaimed as a true and sincere tribute to the classic Action Heroes era.

COMMANDO NINJA 2 STORY WILL FOLLOW WHAT WAS INTROCUDED IN THE “HOPKINS” PREQUEL SHORT FILM:

1988, Communists have been planning to invade America for the past 10 years, hiding entire divisions underneath major cities, moving through the sewer network, and infiltrating into the population! Nobody can believe it!

Today is the 4th of July, the day they have chosen to launch their operation.

Hopkins is gonna have to rally the team, John, Kowalsky and Jenny to fight back, and destroy the evil at its source, the house of the rising sun, VIETNAM! When America is under Attack, When Governments can’t help, if you find them, maybe you can Hire them :

THE COMMANDO NINJAS ARE BACK TO MAKE AMERICA FREE AGAIN!!!

THE MOVIE will have similarities with our Prequel Comic Book published in 2019, we will use it as a reference.

You can READ THE FIRST 10 PAGES HERE, and BUY IT IN DIGITAL FORMAT HERE.

Here is the Comic Book Trailer:

As you may know if you are already a Commando Ninja fan, we love the 80’s, and particularly the Action Heroes era!

Commando Ninja was a tribute to Commando, Predator, American Ninja and others. This time Commando Ninja 2 will take it’s inspiration from movies like Invasion USA, They Live, The Red Dawn, Rambo 2, Missing in Action…

Commando Ninja 2 will still be an over the top Action Comedy: Dark Humour, over the top violence, famous punch lines and other crazy scenes (think dinosaurs, zombies, mutants…)

In this sequel, our wish is also to introduce a big “ADVENTURE” component. Our Characters will travel in a foreign tropical environment, meeting ancient civilizations and wild animals. Think Indiana Jones meets Apocalypse Now and Jurassic Park.

The Action will take place in the United States of America and in the deep jungles of Vietnam. This time we are thinking big, and with zero greenscreen/CGI, we have made plans and deals to shoot both in Utah and Thailand. I personally believe that the audience can feel if something is real on screen ( Think Baby Yoda versus Jar Jar!!), and I have the will to shoot as much as possible at real locations, both for my actors and the credibility of my pictures.

In terms of SFX, this time we are going 100% for full live on-set practical effects, thanks to new partnerships with Armorer/pyrotechnics and Make-Up/SFX specialists. Think nice squibs, explosions, real weapon shooting, practical monsters and make-up.

The original soundtrack will be composed by our glorious returning composer Thomas Cappeau! Want to remind yourself of the Commando Ninja 1 OST while you read the rest of this Kickstarter? As the action will also happen in Southwest America, we will team up with Swamp Music Players among others for some real american tracks.

I don’t want to spoil too much, so here are a few COMMANDO NINJA 2 characters, some of them you already know!

JOHN
John is a former Green Beret and Vietnam Veteran. He learnt Ninjutsu from his Vietcong Jail Keeper when he was a POW. After the events of Commando Ninja and the destruction of the Pentangle terrorist organization, he retired peacefully in a small town of Utah. He is now working hard as a truck driver to pay for his daughter’s college fees.
“Walking in is the easy part ! it’s walking out without your dick in a sling that’s rough…”

Hopkins joined the army at 16. He is a funny guy from Mississippi. He lost his arm, severed by a Ninja during Vietnam, and has now a cybernetic hand. He is one of the few who survived the communist velociraptors and became an Air Force Colonel. After the events of Commando Ninja, he was fired from the Army for stealing a time travel prototype vehicle to save his friends from the apocalyptic future of 1998. He is now working in a small municipality of Utah as a sheriff.
” Do you know why Americans don’t have hemorrhoids? That’s because all the assholes are in Canada! “

Missing in Action during the Vietnam War, he was one of the 4 members of John’s Green Berets Search & Destroy Unit. From Polish origins, he joined the corps at 18, known in Vietnam as the most famous “Lizard Smoker”, specialized at dinosaurs counter-guerilla warfare.

During the events of Commando Ninja, Kowalsky has been abducted by Communists. His brain was replaced by a powerful 4Mhz Micro processor, and his skeleton replaced by a combat chassis, fully armored. He was used as a hitman by Colonel Kinsky, until Jenny reprogrammed him in the future to be American again. Kowalsky now lives hidden in a trailer park, spending his days watching for UFO’s.

“Come on, you bunch of Filthy Swingers Commie lizards jerks”

Jenny was a normal child, playing video games, riding her bmx bike, chillin out with friends, going to school… Until she got abducted by a Ninja Organization and was sent to the future of 1998 where time passed 10 times faster than in the 1980’s, due to the quantic correlation of the strings, and became a grown up post-apocalyptic guerrilla fighter. She is now 20 and goes to College. She’s also got a new badass haircut.
“Kill everyone of those motherfuckers Dad”

Lan is a new character to the series introduced in “Hopkins”. Vietcong fighter from 1965 to 1974, she lost her family during the American bombing over North Vietnam and carries an infinite hate for capitalism.  She is now one of the leaders of the communist invading army hiding in America. She will play a key role in Commando Ninja 2.

Here is a work in progress example of the rewards you could own! These are only rough layouts for Kickstarter, but Definitive Artwork for the rewards (Bluray Covers, Poster, Tee Shirt) will be updated during the campaign and your opinion will count.

I’m a French director based in Montpellier.  I’ve been working in the video games industry for the last 12 years, where I had the chance to produce trailers for famous brands like Assassin’s Creed, Tom Clancy or Mario. More recently I spent 2 years in Vancouver BC, North America, and worked on stuff like Age of Empires 4, Sponge Bob and Dead Cells!

I’m also the creator of Commando Ninja and a few other short films.

As we did for Commando Ninja, our goal is to show that we can produce a movie with a very small and limited crew, and without the stress of complicated legal stuff, huge crew / gear and big studios.

We did Commando Ninja with 30K. This time we are gonna need at least 3 times this budget, because we have bigger ambitions, meaning we need to work with new and talented professionals, hire new locations, and pay for EXPLOSIONS!

Making the HOPKINS Short film was also part of the process to improve the quality of our work. We are aiming for a more “professional” quality, in terms of picture and production for Commando Ninja 2.

We’re open to all the help we can get, so if you feel like you can contribute to this movie in any way, please contact us at: ben.combes86@gmail.com

Ask all your questions and join the Commando Ninja 2 chat at :