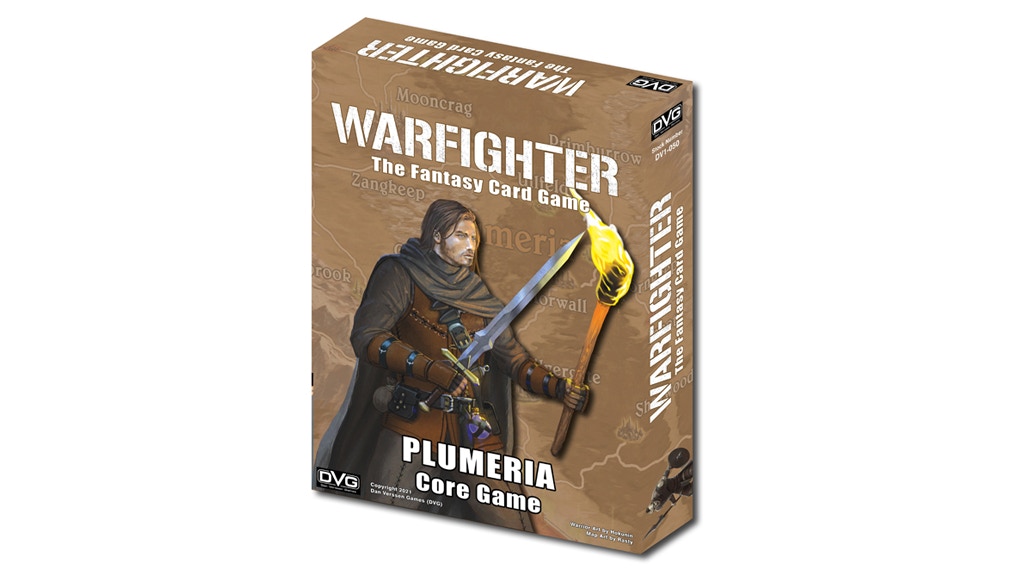 Warfighter expands into the World of Fantasy! This new Era is fully compatible with all other Warfighter products!

Warfighter Fantasy expands the Warfighter series to the Fantasy Era!

Warfighter Fantasy is a card game for 1 to 6 players. You play cooperatively with your friends against the system to adventure through dungeons, slay evil monsters, and gain gold and glory!

Warfighter Fantasy is a stand-alone Warfighter boxed game! The game includes all the Heroes, Weapons, Equipment, Dungeons, Locations, Objectives, and Hostiles you need to fully explore the Nation of Plumeria.

The core game gives you a full adventuring group of Heroes and a nation’s worth of hostile creatures. Each Expansion pack adds depth and variety to your world.

As with all Warfighter products, Fantasy is fully compatible with all other Warfighter products. If you want to build a SEAL team armed with M4 Carbines and LAW Rockets and take them into a Fantasy Dungeon to see how they fair against a group of Orcs, a Spike Trap, a Troll, and a Fire Dragon, you can! Want to bring your Fantasy adventuring group into WWII to storm the D-Day beaches of Normandy, you can!

Warfighter Fantasy includes Divinity-powered abilities for Clerics as well as Mana-powered spells for Wizards. Divinity and Mana use different mechanics to give each their own unique flavor.

Clerics expend Divinity when they use their powers. The only way for them to gain more Divinity is by slaying evil and undead monsters, and clearing out dungeons.

Each Mana spell has a Complexity cost. A Wizard’s Mana skill is the measure of their ability to endure the mental stress of casting spells. As the Wizard casts spells, the stress builds, and they suffer penalties on future spell casting until they have a chance to return to a town and rest.

Warfighter Fantasy introduces the Quest Campaign strategic layer to the Warfighter series. In a Quest Campaign, your Heroes travel from town to town throughout Plumeria, and descend into its darkest dungeons to root out foul creatures of every shape and description.

With every victory, your Heroes gain experience, skills, and treasure, to allow them to enter even deeper dungeons, and destroy even more dangerous creatures.

You will begin by taking on Nuisance creatures, then progress to Common monsters, and then to Renowned hostiles. Finally, there will be only the Legendary and Mythical powers standing in your way to completing your quest!

In the end, only the great dragon Wurm, and its two powerful overlords will stand in your way from destroying their evil threat.

Beware! As time passes, these three overlords will issue Orders of destruction, and your once fair Plumeria will crumble around you.

With each passing order, the towns of Plumeria Fall, and the landscape becomes ever more hostile to your adventuring group.

We are proud of the exceptional reviews the Warfighter series has received. These reviews also feature playthroughs that explain how the system works. Watch one or two of these and you will be up and playing in no time!

Here are a few of those links…

The Plumeria Core Game includes all of the following (plus any extras unlocked by Stretch Goals!)…

Warfighter features a deep variety of material from WWII, Modern, and now Fantasy!

If you would like to add any of the following items to your Pledge, please add their Add-On cost to your pledge. Once you pledge for the game, you can manually adjust your pledge amount to any value. We will run a Backerkit after the KS. Backerkit is a full shopping cart where you can select specific items. Unfortunately, KS has a very poor (ie no) system for doing this. When we send out the Backerkit Surveys after this Kickstarter ends, we’ll ask you to list the products you Added. We’ll ship them all in the same package.

As this Kickstarter campaign unfolds, and Stretch Goals are slain, we’ll add an ever-increasing pile of treasure to your hoard!

US, EU, AND CANADA FRIENDLY!