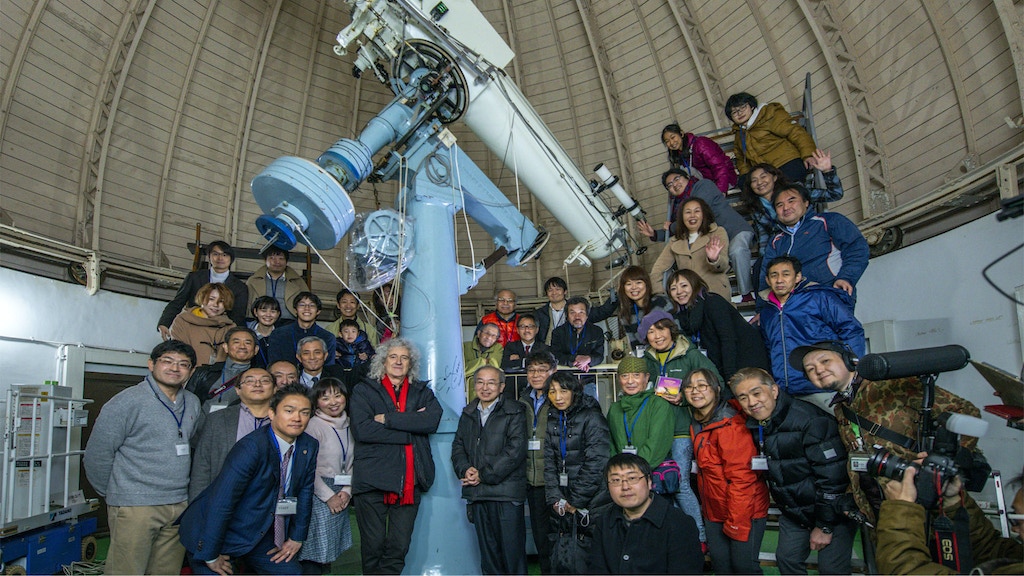 Kwasan Observatory (established in 1929) is the second oldest university observatory in Japan., and has a unique research history, including key involvement in solar coronal research (1940’s), and pioneering the study of Martian meteorology (1950’s). The observatory has also been a very important hub in Japan for outreach activities, so much so it is known as a “sacred place for amateur astronomy” in Japan. However, the financial future of Kwasan Observatory is uncertain, and we are looking for outside funding to support its continued existence.

As the night sky of Kyoto became brighter over the last 60 to 70 years, the frontier of astronomical observations of Kyoto University moved from Kwasan Observatory to Hida Observatory and Okayama Observatory. However, the telescopes housed in Kwasan Observatory are still in excellent condition and extremely useful for education and outreach. The 45 cm refracting telescope in Honkan (main building) is the 3rd largest refracting telescope in Japan, and has contributed to observations of Mars and the Moon. Although it is not presently used for research, it has been very popular at outreach activities such as stargazing parties held at the observatory. The Sartorius 18 cm refracting telescope in Bekkan (annex), which is 110 years old and the oldest active telescope in Japan, is equipped with an H-alpha filter and is still used for monitoring solar flares and prominences every day. The solar spectroscopic telescope in Taiyo-kan (solar building) has been used for educational purposes for students at universities and high schools. In this sense, the preparation for opening Kwasan Observatory to the public is almost ready.

Starting 15 years ago, the plan to shutdown Kwasan Observatory has been proposed and discussed by the administrators of Kyoto University. This proposal stemmed from the reality that the basic budget of the national universities in Japan has been decreased every year over the last two decades, and has led to Japanese national universities adopting a scrap & build strategy: in order to “build” new facilities, we should “scrap” old facilities. In fact, a new observatory, Okayama Observatory, of Kyoto University was established in 2018, so it was decided to transfer the operation budget of Kwasan Observatory to Okayama Observatory. Consequently, Kwasan Observatory faces the serious situation of the shutdown of the observatory.

As Kwasan Observatory is such an important place for amateur astronomy, we know we must keep the observatory going. The old telescopes and instruments are still world class in terms of their value for public education, and thus valuable and useful for education and outreach.

Kyoto was the capital of Japan for 1000 years from the 9th to the 19th century, and hence also the center of important cultural developments in Japan, including astronomical observations by both government employees and members of the general public. Old literature in Kyoto preserves historical records of novae, supernovae, solar and lunar eclipses, aurora, comets and many more important celestial events, some of which have played an important role in the development of modern astronomy and geoscience. The first star-gazing party for the public in Japan was held in Kyoto in the 18th century. Hence, it is not only research but also the outreach activities of Kwasan Observatory that can be seen as continuing the long tradition of astronomy and related culture in Kyoto. We want to preserve Kwasan Observatory not only as a historical astronomical observatory with its 91-year history of unique contributions to research and amateur astronomy, but also as an astro-culture museum to introduce the 1000-year history of astronomy and culture of Kyoto and Japan.

(Former Director of the Kwasan Observatoy, Emeritus Professor of Kyoto University, member of the board of directors of the Kwasan Astro-Culture Foundation)

Dr. Brian May, CBE, an astrophysicist and the legendary guitarist of  Queen, visited Kwasan Observatory on January 27, 2020. Here is his  message to Kwasan observatory (quoted from his instagram post): ”I’m  supporting the observatory’s fight to stay alive – a vital source of  inspiration for a new generation of young amateur astronomers – kids  whose imagination catches fire when they experience this glorious  heritage. KEEP KWASAN ALIVE !!! “

We will make “Uchu-bon” (a picture book on the cosmos in English) for not only the general public but also for school children. In this book we will introduce Kwasan Observatory and key researchers from its history, and beautiful images of the cosmos revealed by the latest astronomical observations.