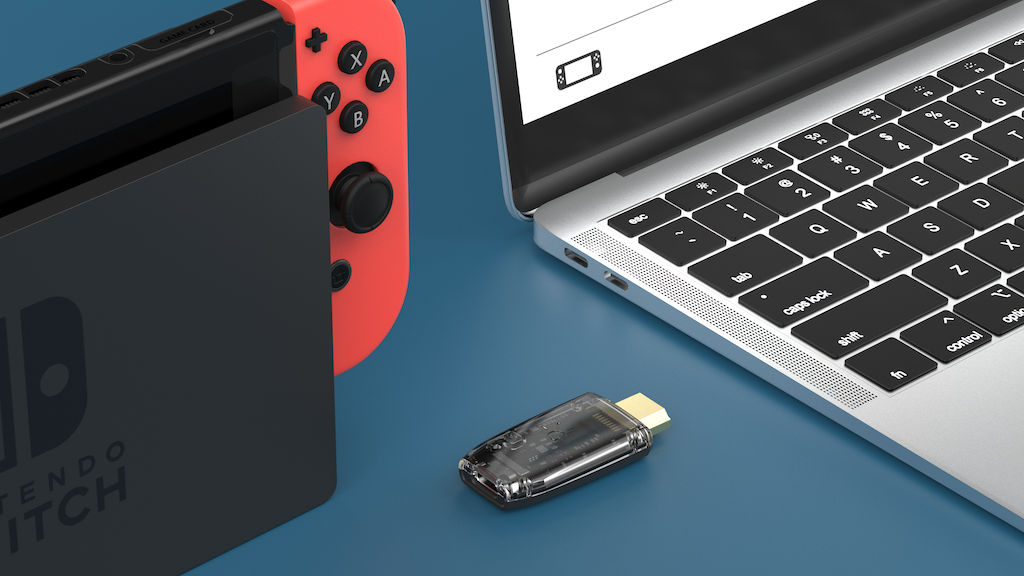 The simplest way to play console games on your computer.  No internet connection or TV needed, play wherever you want.

ShadowCast is the simplest way to play console games on your computer. TVs aren’t always convenient so we made a way to take console gaming with you wherever you are without the need of an internet connection.

As lifelong console gamers, we know there may be some PC master race gamers who gawk at the idea of playing Mario on their powerful gaming computer.  But we say the more games we can play, on even more platforms, the better!

The biggest benefit of course is to take advantage of the screen you’re always carrying already.  Not one of those additional portable monitors but a laptop that we use daily for like… school, work, shopping and creative stuff.

Let’s imagine a time before 2020… and you were waiting at an airport for a flight to board and you wanted to get a couple rounds of Smash Bros in with a friend… or two… or three. Tabletop mode is nice… but let’s just say it’s not the most ergonomic. With ShadowCast you can easily plug your Nintendo Switch to your laptop and play on a screen over 4x the size.

You Could Always use Another TV

There’s also many situations where there just isn’t a HDMI display available – many of us are happy with our laptops and integrated desktop computers. I think back to the times when I lived in a dorm room or even living abroad for brief periods where having my laptop, a PS5, and a ShadowCast would’ve been amazing.

And then there’s always competing for the living room television – whether it’s someone in your household streaming a whole season of the latest Netflix series or just having another gamer in the household. Oh and it also makes having a second television for multiplayer that much more convenient to set up.

Our App Makes the Difference

Accompanying the ShadowCast is our new Genki Arcade app. We literally have made it easier than reaching for the TV remote and hitting the “input” button. We’ve designed Genki Arcade from the ground up to minimize computing resources and prioritize latency for gaming performance. Just open the app, and it’ll auto detect ShadowCast and you’ll be playing immediately without any settings to fiddle with.

We’ve developed a native Mac OS app that’s optimized for both Apple Silicon and Intel processors as well as a dedicated app for Windows. Additionally, we’re in the process of making a web browser version that allows you to play on shared/public computers and other systems without installing any software (compatibility will vary, for example iPadOS currently doesn’t detect external video devices but we’re confident it will someday!).

The beauty of being able to connect your gaming console to your computer means you can actually record, edit, and stream your gameplay. While it may not be at the same level as a professional grade capture card that costs 5-10x more, it’s more than capable for most gameplay capturing needs while being much more flexible and easy to use across multiple platforms.

Sure you can use the built-in video recording feature on the Nintendo Switch but that’s limited to 30 seconds – that mean you’ll have to rush that epic boss fight or finish that speed-run extra fast.  It’s is also a pain to export and you’re limited by an already small internal storage and expensive memory cards. With ShadowCast you don’t have to worry about recording length and can rewatch your whole session of Among Us, add your commentary, and refine your strategy.

We’ve actually created what we believe is the most simple to use, not just for playing but also to record gameplay videos.  Here’s a sample of a recording of us playing on various consoles with the ShadowCast:

These videos are screen recordings of gameplay played off an early build of our dedicated Genki Arcade app.

Plays Nice with Others

We made the Genki Arcade app to be truly simple to use, but for those that need more complexity you’ll be happy to know that ShadowCast is compatible with popular professional capture card applications such as Open Broadcaster Software (OBS), Streamlabs OBS, XSplit, and much more. This will allow you to capture video with detailed customizations and even overlay various webcam feeds, graphics, and animations.

Begin Your Career as an Influencer

Ultimately the main reason for anyone to capture video is so that they can share it with the world. ShadowCast can easily upload your previously recorded or edited videos and even stream live to your favorite platform – whether your team Twitch, YouTube, or FaceBook, we got you covered.

To maximize compatibility across as many platforms as possible, we’ve disguised ShadowCast as a webcam so that it can do a few more party tricks. This means it can actually be selected as a webcam under many typical apps popular today thanks to all the remote working, including Zoom, Google Meet, Microsoft Teams, and FaceTime – and further even supports video players like QuickTime and VLC if you don’t have our app installed.

This allows you to not only share your gameplay live with anyone, but you can actually play with your friends and see them on split screen just as if you were playing in couch co-op mode in-person.

Don’t Settle for a Weak Webcam

As an additional benefit, ShadowCast works with all HDMI output devices beyond gaming consoles, including better cameras.  This means you can upgrade your video conference by swapping out your poor built-in webcam for most digital cameras, including DSLRs, camcorders, and action cameras – as long as it supports HDMI out (some cameras require a HDMI-mini/micro converter).  No more grainy, low resolution videos with poor lighting.

It’s also quite useful for situations where you just need to see what you’re photographing or recording on a bigger laptop screen – no need for expensive wireless monitors!

We actually had the idea of ShadowCast back in 2019 and started to collaborate with  manufacturers of the top video streaming and capture card brands. The timing was a bit too early as the components needed were overly expensive and had originally intended to make a Super Dock. Since then, we’ve refined the idea, dived into software and made something that we’re quite excited to share here.

Here’s also a video showcasing the latency between a TV and ShadowCast. We setup a powered HDMI splitter to show the screens simultaneously with the same baseline:

If you need a more visual adventure we’ve prepared a short video showing the 3 simple steps in real-time to setup ShadowCast.

Get more ShadowCasts if you wanted various colors or one for every console:

Get a Covert Dock, a pocketable dock and GaN charger for the Switch and more:

Get a Genki Audio, connects 2 Bluetooth headphones to your Switch (and other consoles) works docked, and has a port to charge your Switch:

Get a Genki Audio Lite, a slimmer portable Bluetooth audio adapter that is optimized for the Switch and Switch Lite (does not fit PS5):

Get a Force Field Lite, a dual magnetic enclosure grip case with vegan leather to protect your Switch Lite with compatibility for both Genki Audio and Audio Lite:

If you’re in need of a flexible HDMI, premium USB-C 3.1 cable, or portable metal stand:

Genki was a brand founded by three guys with a dream to challenge the gaming accessory industry to make more compelling hardware.  Eddie, Chris, and Andrew miss the good old days of gaming accessories that truly improved the console experience such as the Game Genie, GameBoy Light Magnifier, and Guncon.  But we didn’t do this alone, and there’s a lot of people to thank for bringing this project to life:

And of course, we want to thank backers like you. With your crowdfunding support we’ve been able to operate as a quirky indie hardware developer free from outside investors. This means we can keep our focus on designing innovative human things we believe in without compromises.

This project is promoted by Jellop, the ad tech power behind the best Kickstarters with 1,100+ successful Kickstarter projects with over $460M raised between them.