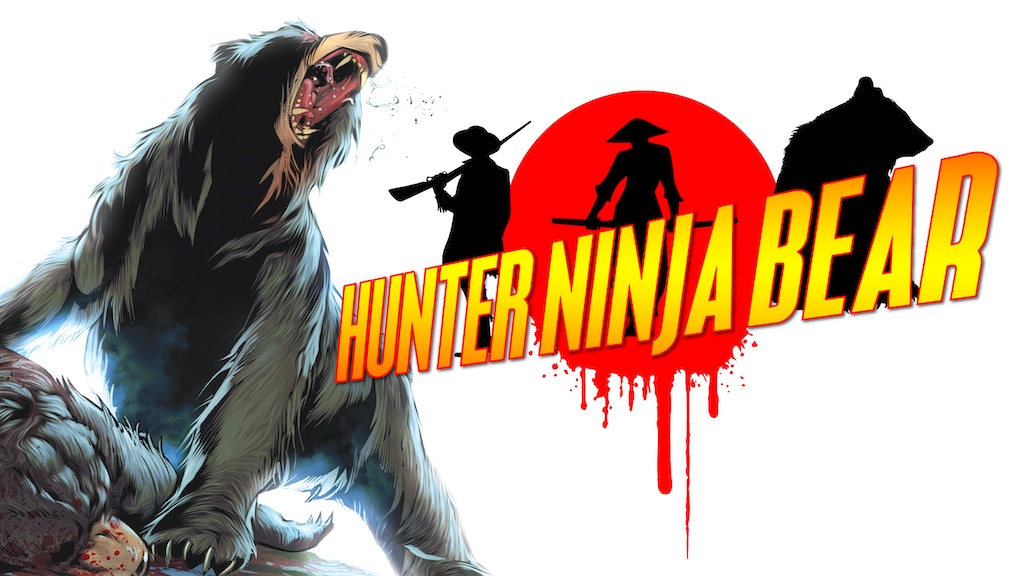 Welcome to our Universe!

We are Fenom Comics.  A new independent entertainment company focused on presenting new thrilling stories and captivating characters that will hopefully span generations of fans.  For our first campaign on Kickstarter, we are proud to present the first volume of the HUNTER NINJA BEAR series.  This origin story of PROVENANCE brings forth THREE supreme forces of nature whose legacies become forever bonded.

Fenom Comics has been in the minds of brothers, Tom and Joe Fenoglio, for decades.  Our vision is to establish a solid core of comic titles and then eventually transitioning them into film.  Currently Fenom Comics has 6 projects in the pipeline, all of which will hit the market no later than 2023.

Pulling in some of the comic industry’s greats, we are dedicated in providing our fans with the greatest stories told by the most incredible writers and artists.  Writer-extraordinaire CHUCK DIXON leads the charge in Hunter Ninja Bear.  His captivating story-telling leads the reader through the long and winding origin stories of our three main characters.  Stunning pencils by the amazing MEL RUBI are beautifully complimented by the iconic stylings of inker ROB HUNTER.  All of which is wrapped together by the eye-popping colors of the great IVAN NUNES.  This all-star line-up is rounded off by none other than the lettering wizard, TAYLOR ESPOSITO.

It was incredibly crucial to us that every aspect of Hunter Ninja Bear was constructed to the highest level of quality.  Our title design speaks to this dedication.  Partnering up with Hollywood legend JAY JOHNSON, the Hunter Ninja Bear title design was meticulously worked on through its various development stages.  A labor of love for Jay, Joe and Tom for sure, especially knowing that Jay had designed virtually every movie title for Quentin Tarantino‘s film catalog.  We genuinely hope that you enjoy the subtleties and nuances of this graphic novel as much as we do.

We give our word to all our future fans that Fenom Comics will always strive to provide the highest quality products and service.  We look forward to taking in your feedback for future product development and direction.

We hope to have you as a backer to the new and upcoming comic company of Fenom Comics!  We are extremely proud to present our first project here on Kickstarter.

Tom & Joe along with the entire Fenom Family

Our origin story is set into motion by the callous destruction of sacred burial ground hidden for centuries deep in the Japanese countryside.  The last of the ninja, Satoru, finds his efforts to be futile in stopping the brutal massacre of his entire village by a horde of preternatural bears, who have descended upon the humans in retaliation for the sins against their ancestors’ remains.  Fully aware of his inability to avenge his village against the mighty beasts, Satoru looks to his gods of war for spiritual guidance in this quest. Their answer is clear. Vengeance cannot be wielded by the blade of his sword, but only at the end of a rifle barrel belonging to the legendary American frontiersman, John Wilkers.  A trail of blood leads the lone ninja and the famed mountain man to the mother of all living terrors, the demon bear Fire Cloud.

Like the everyday game of ROCK PAPER SCISSORS, the rules of this saga are simple:

Three legendary warriors become the last of their kind by surviving an unforgiving circle of death.

JOHN WILKERS:  One of the greatest frontiersmen in American history, unintentionally becomes a larger than life legend in Japanese folklore.  Driven by an unbridled desire to cutdown an elusive supernatural rival, his persistance becomes his eventual undoing.  For the first time in his many acclaimed pursuits, the hunter becomes the hunted.

LITTLE HEART:  A great warrior whose name does her no justice.  Her pure heart is only overshadowed by her innateability to become one with the forces of nature.  Her journey becomes a beautiful spiritual awakening that will alter the course of life and death for those closest to her, for better or worse.

TAJIRO SATORU:  As the last of the ninjas, Satoru has struggled to keep his honorable traditions and teachings alive in his small farming village whose main goal is to catch up with the philosophies of modern day Japan.  His ancient ways shine once more as Satoru is forced to avenge the savage massacre of his entire community.  No match for the beasts that he must slay, he looks to the western world for help.

LITTLE HEART:  A great warrior whose name does her no justice.  Her pure heart is only overshadowed by her innateability to become one with the forces of nature.  Her journey becomes a beautiful spiritual awakening that will alter the course of life and death for those closest to her, for better or worse.

FIRE CLOUD:  The first discussion of a sighting of this strange beast in the foothills of Mount Fuji may have been in 1841 when a small Japanese group of surveyors officially sanctioned a small parcel land to be for and only for an unknown breed of indignious bear.  This account was not published until 1857, however, when several western newspapers began to print items about a demon bear ravaging the Japanese country-side.  To only regard the creature known as Fire Cloud as a phenomenon or fictional creature without biological basis would be to ignore the story within.

Fire Cloud’s ascention into a mystical creature of demonic eminence starts with mankind’s complete disrespect for the balance of nature.  Death and destruction are sometimes the only forms of negotiation that are able to break through the darkness of indiffernence and ignorance.

Available rewards include books and swag delivered as soon as possible.

This graphic novel is being offered in two formats, depending on the tier you choose to pledge: a digital ebook (available for download the month the book is released) and an unsigned premium paperback.

These premium books will be  printed on FSC-certified acid-free paper, and bound in a FSC-certified environmentally friendly colored paper material.  Each shipment also includes a Hunter Ninja Bear logo sticker.

Beyond these premium physical and digital formats, we are also offering clothing swag and a Kickstarter exclusive story poster created by the same artists who brought you Hunter Ninja Bear.  With the shirt apparel, you will asked shirt size, style, color and logo choice.  In regards to the hat collection, the hats styles and sizes will be provided to you for your choosing. These swag details may not be able to be changed once your input has been processed.

A detailed breakdown of our reward tiers are as follows:

Shipping prices break down to $10 for domestic shipments, and $35 for international shipments, all paid up front during this campaign.

We welcome international orders and look forward to doing business with you!  However, Kickstarter does not allow us to collect the additional import duties and taxes that may be imposed by your government.  You may be required to pay additional fees and taxes on our shipments.  We will pass along such information as it becomes available.  Also, we unfortunately cannot ship everywhere.  If there is a shipping issue that does not allow our mailing to successfully go through, you will be fully refunded.

Any pledge towards a physically shipped reward will receive these exciting BONUS ITEMS when the corresponding campaign levels are met and the items are activated!

We hope you will join us for the release of Hunter Ninja Bear: Provenance—the debut release for Fenom Comics.  Once date and convention location are set, we will let you know.  Hopefully, you’d like to join us in person. We’d love to see you there!

We hope you will also join us for the upcoming book release of the Seven Deadly Sinners, available on Kickstarter soon.

Check out this link below to find out more about our coming current book titles.

If you need any assistance with the campaign or orders, please email us anytime.