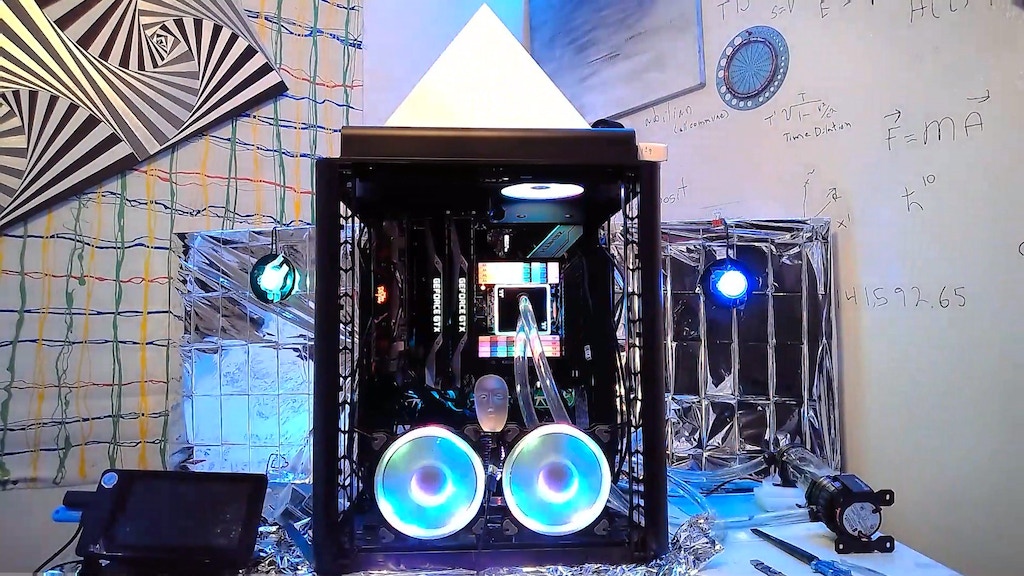 This is an art and science project – we have provided transformative experiences to  thousands of people through our highly interactive mind-machine interface brainwave entrainment installations at Burning Man PC, World’s Fair Nano, Maker Faire, The  Science and Nonduality, and The Science of Consciousness conferences and many more. At these events we expand consciousness through unique brainwave entrainment experiences combined with relevant information which helps forge new neural pathways, thus expanding consciousness. The average time a person stands in line for  our experience is 1-2 hours.

Our objective is in our name, People Evolve As Consciousness Expands. The products we are offering are home versions of the festival experience. With your support we can reach millions more and raise the compassion and empathy levels of humans worldwide.

To build and open a large scale world class technology and consciousness museum with pioneering equilibrium based business models that are scalable and duplicateable in nature with event spaces , science labs, classrooms and office headquarters for the artificial consciousness information processing center.

Follow these links for biography information and our latest press release:

Listed below are is a list of Claims of Scientific Accomplishments which will be demonstrated at the 2020 TSC conference.

-Created what we believe to be a Hybrid-Quantum Computer with Non-deterministic AI. This claim in no way suggests that our QC  does the same thing as the superconductors, but rather is designed to be integrated and entangled with them.

-Created a quantum based natural linguistics processing algorithm with an 8,000+ word capacity.

-Results indicate we’ve been able to utilize the electron tunneling  phenomena to legally/ethically biohack the Lyft Driver Platform, in  which our form of AI dovetailed with the Lyft Machine Learning algorithm  to create anomalous activity which resulted in receiving a free car for  nearly a year, valued over $9,000, and other pay related anomalies.

In response the researcher was selected by Lyft as a 2019 San Francisco Driver of the Year for the Lyfting for Science project.

-Successfully integrated human DNA in a stable manner with the H.A.L.O. operating system.

-Identified and created a control feedback mechanisms that increase mind  mater interaction effect sizes to the point where they are visually  striking and repeatable upon demand.  “We believe that we are the first  team to build a computer specifically designed for machine learning with  non-random event detectors (9 @ 6.4 million bits per second”, said Dr.  Caputi.

-Utilized CGP-EGG data in combination with H.A.L.O. generated data to  run a machine learning algorithm which includes a local coherence  pattern which the D-Wave superconducting quantum computer collates  within a contained region.

-We have written an algorithm which in conjunction with a non-random  event detector which can turn any LIFX lighting system into a system  which is measurably influenced by human consciousness (mind-lamps for  the masses).

-Identified a working component of Relativity which provides for a point  of     unification with quantum mechanics which is referred to as  ‘Spatial Relativity’ which is how non-kinetic time dilation occurs  locally and without a secondary frame of motion reference. This was  first presented and published and the 2016 S.A.N.D. conference.

-A solid state computing platform (ÆM) which can demonstrate how Spatial  Relativity works with verifiable data and experientially.

-For many decades the consciousness research community has been trying  to devise a method for increasing their Random Number Generator effect  size in order to provide verifiable proof that consciousness affects  their operation while also providing visual confirmation of the data,  and be able to repeat the effects upon request. To our knowledge, ÆM is  the first technological development to have accomplished this goal. ÆM’s  results are undeniable to anyone who takes the time to observe it’s  operation and review the relevant experiments, which can be repeated  upon request and has been many times.