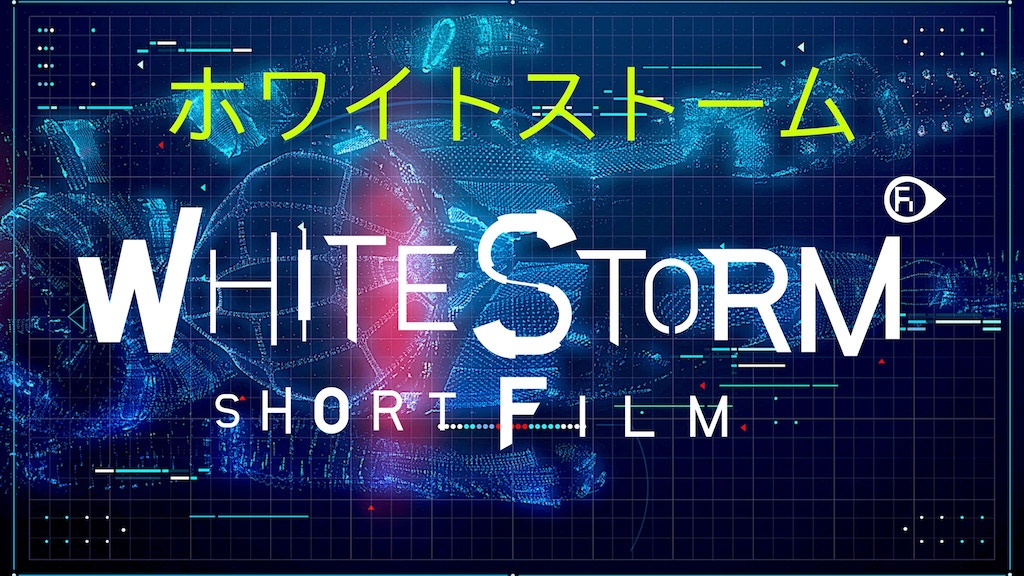 Synopsis : “Air force pilot intelligence officer Sandy experiences identity transformation after realising she has been artificially built and controlled by a cybernetic existence.”

A 2-minute Short 3D Film with the character speaking to the artificial self from within.

Interactive 3D Short Film White Storm is based on the research in Computer Graphics in the area of the Facial Animation and conceptually inspired by the anime Ghost in the Shell (Mamoru Oshii, 1995).

// Please note: The Rewards are all Digital.

Your Name is Featured in the Credits of the Short Film White Storm.

Digital Access to the Hight Fidelity Visuals of the Digital Art from the Film.

The E–Book PDF about the Making of the Film.

A Video Message Answering Questions From Our Backers.

Example and some information about the production design:

About the Character Sandy

Oleg is a professional 3D Artist working in the Facial Animation Industry with the Post Graduate Qualification in Digital Design from the Auckland University of Technology in New Zealand.  Resume.

Short Film White Storm is the Interactive 3D Computer Graphics Project that is narrative driven. We have primarily decided to launch the Kickstarter campaign to have help with the following areas:

We aim to reach NZ$ 81,500.00 in fund raising to support the production of the Short Film White Storm.

After all subtractions our budget for production would be is NZ$ 46,455.00.

This is the breakdown of each sub-task within the production plan:

This is the view of the final budget calculations and the funding goal:

This is the visual diagram that illustrates the Funding Allocations:

We have a team of creatives who would be helping to make the Film.

And we aim to have all components completed within 8 months minimum and 12 months maximum.

Learn more about the Research Design

The original project proposal for the Short Film White Storm has been designed in 2011 during the Digital Design degree at the Auckland’s University of Technology.

AVA or the Artificial Visual Apparatus is the research design framework that underpins the Short Film White Storm investigation into the communicative potential of the human eye to express emotion.

The original script of the film is a 1 page document. It contains the self dialogue of the main character having a conversation with her artificial intelligence self.

The drawings and the initial ideas for the film have been the product of the traditional art medium for the conceptual design process.

Starting from the initial drawing of the surrounding elements the digital character’s design went through the medium transformations.

Final Assembly of the 3D Digital Set for the Short Film White Storm:

The 3D project is available to experience online.

We are looking for your support

With fundamentally the 6 key components of the Production Design:

We are not Alone …

Lorenzo Penco is our Lead 3D Artist. He is in charge of all the 3D Design for the film.

Miriana is the main contributor to the visual appearance of the main character in the film. And a content creator.

Sally Day is the Voice Over Artist for the primary role in the film.

Matheo Ramone is the film’s Music Composer and The Music Producer.

Tatiana Prus is the Sound Designer for the film.

Shiyan is the Video Editor.

Because of the short film White Storm project we have formed the Digital Design Studio called The Acute Line ( www.acuteline.com ).

You can find out more about our Team of Creatives here.

Our goal is to create the coloured version of the Vector Illustration that could be a source data to produce digital images to be used for both display and print purposes.

The original Vector Line Art is highly detailed and will be colourised into the Cyber Punk Art work.

We did some initial image colouring tests to establish the foundation and define the palette for the Vector Illustration.

This is the example of the future poster design(s) that will be produced as the result of the application of the Finalised Digital Vector Illustration.

This is another example of the poster design using the 3D Scene from the Short Film White Storm:

For the final report on the project progress we plan to produce at least a 100 page E-Book document with all the visuals including the outline of the making of the Short Film White Storm.

It would be available for download as the Digital Reward by a PDF.

We did the initial test animation for the Logotype of the Short Film White Storm:

We would like to enhance the quality and the detail of the Motion Design for animating the Logotype of the Film.

Eventually using the Motion Graphics Elements to be projected onto the surface of the Digital Eye. To be a Visual Effect communicating the Artificial Intelligence presence the body of the main character.

The very high resolution scanner was used to digitise the artwork in the highest resolution possible in order to preserve the tactile nature of the painted surface:

> Real-Time Version of the Digitised Painting

We have completed the sample project with the help of a talented 3D Digital Artist, Lorenzo Penco who have done the “Wonder Creature” 3D texture paining using the projection method:

In this example you can see how the original brush strokes from the traditional painting approach have been projected onto the 3D Model:

Our goal is to fund the work of the exact same method to Cover the Entire Surface of the Digital Set around the main character.

We have a Fully Documented Creative Brief that holds the description to make this effect using the 3D Projection Method:

We have done the initial material break down of the Digital Scene under the following categories:

Our goal is to create the pre-recorded experience. And some of the results would be available to experience as the Real-Time 3D Showcase with limited interactions.

Driven by the motivation to separate the two personalities ( artificial & human ) performed by one character, the voice of the two had to undergo a sound design modification.

During the initial development of the prototype and the planning process we have produced a Cyberpunk / Synth-wave Style Soundtrack with the help of our compositor Matheo Ramone :

We are hoping to produce a variety of Sound Tracks with the similar atmosphere.

These tracks would be augmented with the vocal audio samples from the film narrative sequence.

The final collection of Audio Samples and the original soundtrack produced for the Short Film White Storm will be the Digital Rewards Available for Download online in the .mp3 format.

The current state of the Quality of the Facial Animation is not perfect and requires work:

Our goal is to Improve the Fidelity of the Facial Animation.

And to enhance it using the Artistic 3D Computer Animation.

In order to enrich the Visual Perception of the storytelling experience we would like to create some Visual Effects for the film.

Because we wanted to specifically Emphasise the Nature of the Science Fiction in the Design.

And to Bring the Viewer the Experience of the Live Animated Set within the world of the Digital Film.

Here is the description of the 3D Animation and Rendering Work that we are to achieve within the Short Film White Storm:

1. Connect the wires to the body of the 3D character using spline animations.

2. Create the mystical smoke effect around the elements of the 3D objects within the 3D world of the film.

3. To create a limited amount of glow effects in order to give the “magical” nature to some of the materials used in the Film.

4. Create a secondary animation of the “Wonder Creature” that is present within the Digital Set.

We wanted the head of the creature to be animated and to give a minor secondary movement to the creature’s legs.

In order to convey the Realism of the Virtual Character we wanted to base the Visual Identity of the character on the reference from the real world.

Our goal is to create the “stylised” character based on the variety of people referenced from the real world.

Therefore the character would receive the Video Game type of appearance.

We are exploring the synthesis of the visual appearances the 3D Character would receive within a spectrum of content creators contributing on the global scale.

During the filmmaking process the library of digital images will be created.

And this library will be available for a digital download to our backers.

And we also experimenting with custom Visual Design of the film inspired by the Japanese Anime looks and other examples of the related mediums from cyber culture.

The Short Film White Storm will be available to experience in Virtual Reality using a VR headset and a compatible browser. We recommend using Google Cardboard for the simplicity of accessing the VR technology.

You will be able to integrate the content of the Short Film White Storm within the natural environment ( The Real World ).

And to place the 3D Scene into the surrounding space.

You can use your device’s camera to enter the AR mode.

The Interactive 3D Film White Storm will be available to experience from the mobile devices because it is based on the web technology.