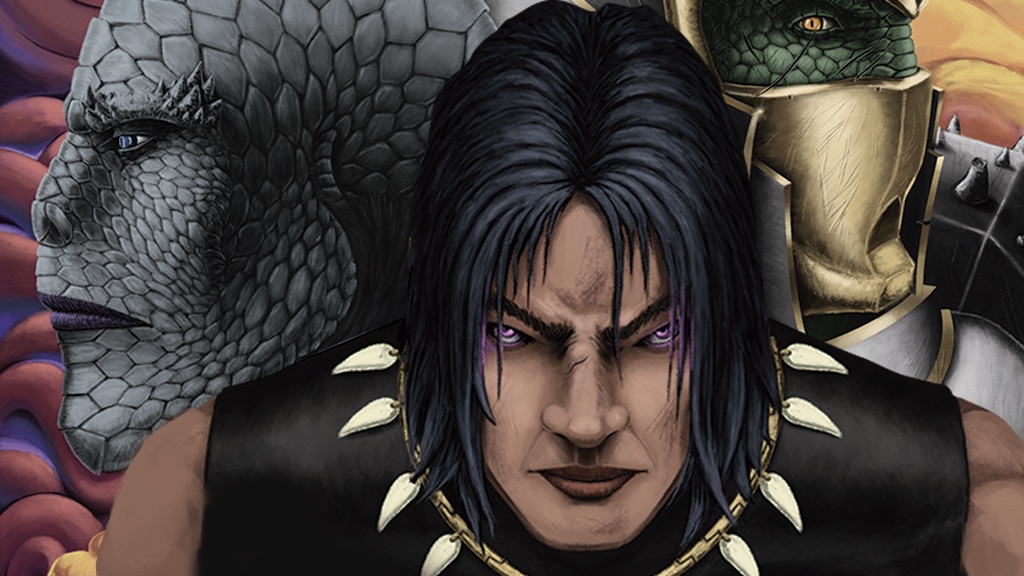 A story inspired by Zecharia Sitchin’s research of the ancient astronaut theory.

Jawar is the evolution and consummation of an idea conceived since childhood and its completion is a dream coming to life. I’m Jose Miguel Macias Mejia, creator and scriptwriter of the graphic novel “Jawar the Age of Gods”. I appreciate the opportunity and the time you’re dedicating to read about this fresh and bold project.

Hector Martinez–comics lover and an outstanding draftsman whose main feature is designing realistic characters over surrealistic backgrounds to convey an emotion to the reader–joins me as an illustrator.

We’re both freelance Mexican artists with very limited resources and support to execute this project, but we have a solid determination and confidence in “Jawar the Age of Gods” for the story it tells. Our dream is to share this story with you, dear readers, the good-stories enthusiasts that inspire us to fulfill this purpose.

“Jawar the Age of Gods” aims to be a refreshing, adventurous story that imagines the creation of humankind and civilization in a different way. Combining several ancient astronauts theories in a story about a genetically enhanced human, trained to act as a weapon by space creatures, and whose character rebels and starts a revolution to liberate humankind from the yoke of the so-called “Gods”.

Mainly inspired in research about Sumerian mythology made by the Azerbaijani Zecheria Sitchin–one of the main advocates of the ancient astronauts theory–as well as other resources and tales about beings hailed from the stars. “Jawar The Age of Gods” dives into those myths and imagines a story about how they could have occurred with the role of Jawar.

A story well-balanced between intrigue, violence, lust and philosophy makes “Jawar the Age of Gods” very entertaining and interesting.

What is Jawar the Age fo Gods about?

“Jawar The Age of Gods” narrates the end of the Urus invasion¬–reptilian beings from planet Nibiru who came to Earth seeking gold, the mineral that stabilizes their DNA to become immortal. The story’s focus is on the rivalry between brothers Enki and Enlil, both pretenders to the throne of the Urus, and whose success of their civilizations’ mining operations on Earth will define which of the two ascends to the throne.

Enki, exiled for his past mistakes in the operations management, uses his knowledge in genetics to create an enhanced group of humans, among which is Jawar, the leader of the ´Condor Team´. Enki’s plan revolves around sabotaging the gold mines to make his brother, Enlil, look bad while Enki works on a permanent alternative to preserve the Urus’ immortality and thus becoming the emperor of his civilization.

The Urus’ mining operations have maintained peace during millennia until a mission of the Condor Team attacks the Urus’ sole cargo ship on Earth, along with an important mine which also works as a storage facility. After a bloody battle between giant Nephilims (which are the Urus’ soldiers) and the enhanced humans, along with the collateral damage resulting on thousands of dead slaves, the Condor Team achieves its objective.

That is how the mining operations harmony is disrupted and it forces the royal family members living on Earth and controlling the labors, to come together–including the exiled Enki–and deal with the mysterious enemy, taking measures to protect themselves, reclaim their lost gold and preserve the exploitation of the precious mineral in light of the imminent return of the Urus to Nibiru, their home planet.

Jawar is made up of nine volumes of 160-230 pages each, constituting the Age of the Gods saga. These 9 volumes are divided in 3 acts. Currently, volume 1 is being developed: “Sabotage and consequences”.