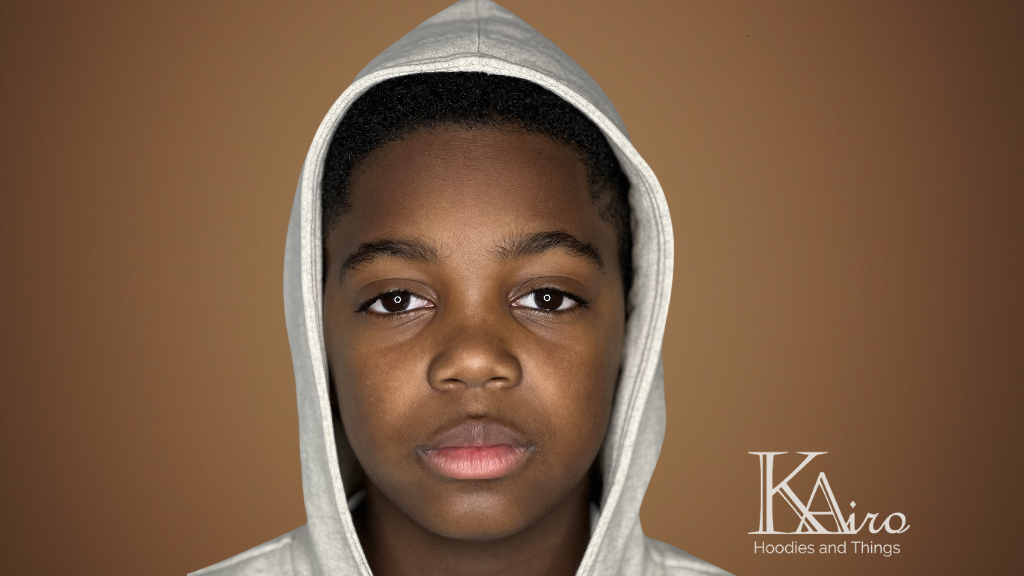 Kairo is a boys clothing line elevating hoodies and hooded jackets, while changing the narrative about brown boys who wear hoodies.

My son was 8 years old, when I had to bring to his attention the idea of presentation/ physical appearance. He was 8, so there wasn’t a long over saturated conversation but rather a short sweet revelation; “Certain clothes can attract unwanted, negative attention”.

The clothing in question, this chilly fall morning was a hoodie. A hoodie gifted to him by a friend. One that he had worn in the house many times. This particular hoodie zipped up over his head and gave him a mesh covering with big red bug eyes, sort of like a fly. Yes, in my opinion it was ugly! But it was fun, it awakened his imagination and was the source of so much play within our home.

Just the thought of him going out in this hoodie made my stomach hurt, and my mind flood with a thousand questions, and what ifs. But as moms sometimes have to do I said,  “NO”. I then chose a different sweater for him and took him to school.

My mind continued to circle around that moment for some time. The bug hoodie was warm enough, it fit him well, it was free of holes and stains, there was no obscene language on it, or anything offensive for that matter. So, I began to ask myself why, why do I feel so uncomfortable with my son wearing this hoodie? What is the real problem here?

I reflected on how I believed young boys were viewed when wearing hoodies. How they were portrayed: untrustworthy, suspicious, up to no good. The list could go on.  I realized that these ideals were shaped by society, media, the news. Hoodies have begun to represent troubled youth, and often criminals. As a brown mom, I just want to do what I can to keep my son from “fitting the description”.  Now I asked myself if by keeping my son publicly from wearing hoodies, am I perpetuating those ideals as truth? So how do we fix it?

We change the narrative. Hoodies are comfortable, relaxed ware. A staple of American culture, an item of clothing that most people own. So I decided I wanted to start a new conversation that shifts the narrative from criminals to productive, contributing young boys. A conversation that celebrates our young boys, and their need to be comfortable and proud of what they wear.

Thus Kairo, was born. Kairo means – victorious or victorious one. What a perfect word to describe the young boys that Kairo represents. They are successful, important, kind, full of youth and they are loved. Kairo is for my sons, and every other young boy who just wants to wear their hoodie, and feel safe, seen, and respected. But more importantly Kairo seeks to reach moms who may feel like I did on that Fall morning. I hope to ease their hearts and minds. I want to become apart of their village because together we can create real change for our kids.

My hoodies and jackets are clean cut and have a tailored look. I really want to focus on elevating the hoodie and how it is worn, I want my message to be easily translated through my clothing. I want people to see my designs and find them relatable but unique.

This first collection will be titled Victorious-It consists of 3 hoodies, and 4 jackets. Each hoodie was meant to be worn with 1 of the jackets. The jackets have removable hoods.  The jackets and hoodies paired together create an almost business casual look that I think moms will appreciate.