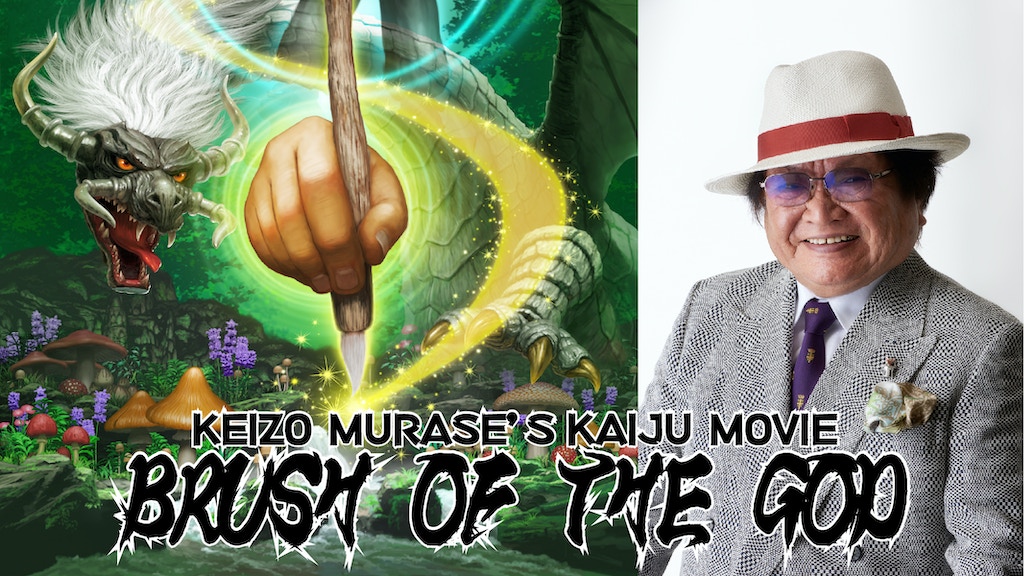 Determined to make a film inspired by special effects uniquely prominent in works such as Toho films “Varan the Unbelievable”, Showa era Godzilla , Gamera, Ultraman, and Rider series, Legendary Monster Creator Keizo Murase seeks to create his first and last film directed by himself,  “Brush of the God”. “ Brush of the God” is an original story that was developed by Mr. Murase during the production of the movie “The Mighty Peking Man” a film Mr. Murase did the special effects for earlier in his career, 40 years since the creation of the concept of “Brush of the God” Mr. Murase wishes to bring it to life on the big screen.

The script is written by Takashi Nakazawa, author of “Hatsukoi Geinin”, which has been made into TV drama on Japan’s NHK channel. In an unprecedented occurrence Mr. Nakazawa also wrote the TV adaptation of the series as well.

Monster designed by Akira Takahashi who worked on various projects but is most notably known for producing art of the characters for “Kamen Raider”.

Nishikawa Shinji who worked on monster designs for various Heisei Godzilla productions, and most recently worked on the animation by Studio Trigger “SSSS.GRIDMAN”, will also lend his talents to the project as well.

The Promo poster will be drawn by Yuji Kaita, who worked on posters for other productions such as “Ready Player One” and “King Kong: Skull Island”. Our Director of Photography will be Daisuke Sato, who recently created the short film “Howl from beyond the Fog”.

The movie will have feature Giant Monsters as well as giant creatures based on Japanese myth and folklore. The Tokusatsu scenes will of course use rubber suits and miniature sets but will be packed to the brim with legendary special effects that will bring the viewer back to the time of the golden age of Showa Tokusatsu productions.

The more we can raise the more we will be able to add more talent to the production, which will help grow the enjoyment for all.

By the end of 2021, “Brush of the God” will be released in theaters in Japan, and our plan is to have the film be screened at overseas film festivals and conventions.

The rewards for this campaign have been limited in order to effectively secure the movie production costs. It is our hope that people will aid in helping with the overall production cost, so that we can get a quality movie released in a timely manner.

About the “Brush of the God”

“The Brush of God” is a film project proposed by Chua Lam while Mr. Murase was working at the movie studio “Show Brothers” in Hong Kong to produce “Snake Prince” and “The Mighty Peking Man”. The story was set in China, which effected the character design along with the story, still even showing much promise then, they were unable to produce the idea into a movie.

40 years later in 2020, This being Mr. Murase’s first and last directed film his goal is to make the film a reality using the techniques of the past but making the story appeal to today’s audiences.

The story has been arranged in a Japanese style with the help of Ken Nakazawa steering the story towards a more modern-day Japan. Character designer Akira Takahashi and Shinji Nishikawa will redesign the enemy monster from the original story, the infamous “Yamata no Orochi”. Nishikawa will also be in charge of storyboarding for the movie.

One day, a boy living in a rural town in Japan encounters a rabbit with a mysterious brush.

The rabbit, which speaks human language, explains how the brush it has can make whatever one thinks into reality, and is on a journey to keep the Yamata no Orochi from resurrecting into the world and keep the brush out of the hands of nefarious individuals.

With danger, excitement, and wonder ready to be told using the crisp special effects of a past not forgotten, an adventure with the mysterious “Brush of the God is soon to begin.