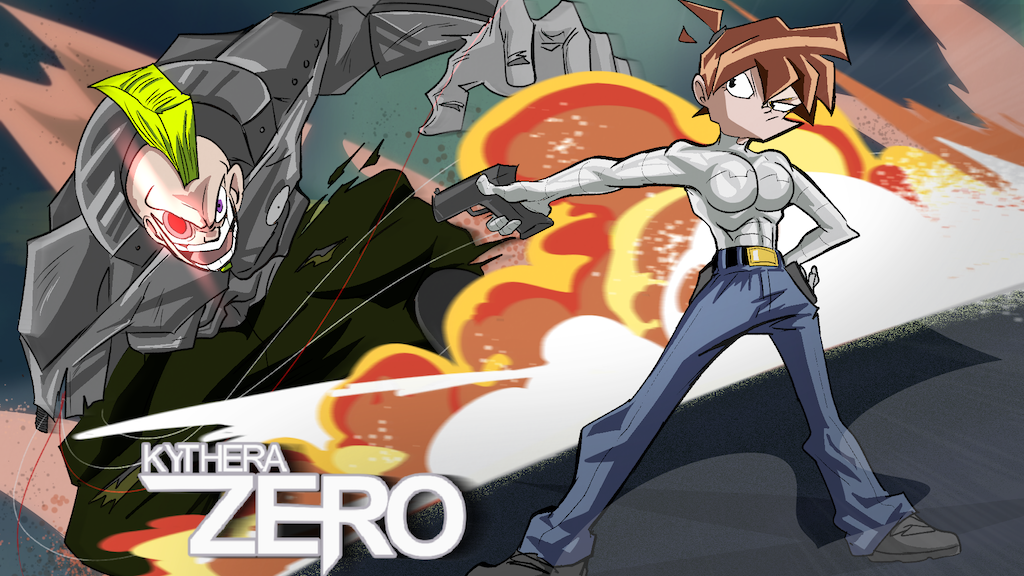 K-Zero is a whacky sci-fi action-comedy set in a not-too-distant alternate dystopian future. After a new government seizes control of a balkanized nation, many factions come to the forefront fighting for supremacy, control, and freedom. Ada is a federal agent, who using her own sense of Justice, is trying to keep the peace and order thorough. But as things grow more complicated, she just may have to confront her own nature, and her own allegiances.

Below is our award-winning short that is still running trough the film festival circuit and continues to pick up accolades. Its a TV series proof of concept we created to start getting a feel for the characters. With over 25,000 views total online and the attention it continues to receive, we know KZero has an audience waiting for more! So we want to make a full 20-24 min. pilot episode!

Here’s just a few of festivals we’ve been selected into and/or won awards at, with more to be announced!

The year is 209X. Toward the middle of the 21st century, the U.S.A. fell and gave rise to a new, powerful federation. Slowly, the federation seized power and began a campaign on it’s citizen’s minds and freedoms. Despite having many loyal citizens, the Federation’s many abuses has created a powerful contingent of anti-government radicals, some with good intentions, many without.

We follow Ada, a federal enforcer and detective. A checkered past has given her a desire for redemption, costing her her original body. She may question her humanity, but she never allows her personal insecurities interfere with her job to protect as many people as possible and redeem herself. No matter the cost, Ada will save you every time!

The protagonist of the series, Ada is a powerful, headstrong, witty federal agent and detective. Don’t let her stoic exterior fool you, deep down she struggles with the choices she’s made and the body she’s stuck with.

General Hawk- Ada’s main adversary in the award winning short and general of the Huxwell terrorist group! With a loud, bombastic personality, he’s committed to his cause and loved by his men…though he may be insane, depending on who you talk to.

The Mooks- Low level grunts for hire found in every terrorist faction. Though there’s so many of them, some say they blend together and are hard to tell apart. Legend says they all know each other by name. Look out for Chaz, he likes to squat.

We’re a creative team of animators, voice actors, and illustrators with a love for traditional 2D animation! Wanting to help foster talent and create something truly unique, we formed Studio Y.G.Krow!

With a strong love for good storytelling, action, and comedy, we made Kythera Zero as our first official group project! We have many other series ideas and characters we want to bring to life and to the screen, and we want to use KZero as our launching off point! If you’re interested in our other works, check out our Youtube, Newgrounds or website!

Website: www.studioygkrow.com (has links to our other social media as well)

Working together we’ve refined a unique production process that takes parts both from Western and Eastern animation. Doing this, we’re able to create quality and dynamic works. This gives the animators and artists more freedom in the production process while still being stylistically consistent, something that isn’t as common here in the West. This doesn’t mean we’re an anime inspired studio however, rather that we’ve taken what we consider the best parts of animation production globally into our own style.

Raziel Gore is an animator, illustrator, and storyboard artist. Added to that, he wishes to produce live-action film, and does voice-over acting. A jack of many trades, he has worked in live action, musical composition, and sound design. His specialty is 2D hand/traditional and digital/traditional (tradigital) animation and storyboarding!

Marcus Purnell is an animator from Philadelphia, Pennsylvania who recently graduated from the University of the Arts. He’s very ambitious and passionate about designing characters, animation, and comics. Currently, he works at OVFX/Outlook Company where he does storyboards and animation.

Ben Sutherland is an animator, screenwriter and voice actor. He has worked on several award winning films, wearing many hats through the various productions. From animator to voice actor to writer to producer, Ben is an adaptive artist that excels in whatever role he’s in. He one day dreams to direct his own animated TV series.

A hard worker armed with a BFA in Animation and love of Visual Development. An animation-enthusiast, Jhaneen was recruited as a Background Artist and Colorist during production of the original KZERO short.

Kevin Rivera is a self taught illustrator that majored in 2D/3D Animation. Whether it’s an animated series, movie, video game, or comic book, he always seek new avenues to create new stories for people to enjoy for the present and into the future. From cosmic space horrors, adventures during prehistoric times, or the trials of a struggling worker, he wishes to dive deep into these tales that can speak to someone as various stories had done for him!

A talented illustrator and background artist, Kara graduated from UArts and was the head background lead for the original KZERO short!

A young, creative newcomer in the entertainment industry that’s ready to be heard! Loving acting since she was little, Rachel grew to love voice acting while in college and is now a professional, providing the voice of the star, Ada!

Sean Goodrich is a Korean American Voice Actor, Sound Designer, Script Writer, Director, and Content Creator. He is the creator of the upcoming podcast series “The Faylor Region”, voices Ed in the upcoming fan spin off “Peach Creek” and voices the terrifying General Hawk!

Bradley William Smith(Voice of the Mooks!)

Bradley is a voice actor who also does animated show reviews on Youtube! Boasting over 10,000 subscribers on his channel and playing Combo Pand in Ryan’s TOy Reviews on Nickelodeon!

More team members will be added as the project moves through production! Keep an eye out for new faces!

Lets be honest, money talks. And it’s only fair that people be paid fairly for the hard work required to make this project work. The original short was an $400 micro-budget passion project, with most of it going to voice actors and a sushi dinner to the small animation team. Now we want to pay a team to produce K-Zero with a proper budget!

This is strictly for a project we believe in and want to bring to YOU, the Backers and people worldwide. That’s exactly why we need such an extensive budget. Animation isn’t cheap, we know it firsthand. By paying our animators and team, we can help create jobs for talented people! All funds will be allocated towards the production team and a small amount to produce certain rewards.

Where the Money Is Going

*these are current estimates and may be subject to change

The majority of our money will be going to hiring up to 10 additional animators to help bring the pilot to life! The second biggest chunk will go to hiring up to 3 background artists, who will help finalize layouts into full backgrounds. After that we have the colorist team of around 4 people, who will take the finished animation and add the last secret ingredient: color. Music/Sound Design is next, followed by hiring a Lead Compositor and lastly up to 6 Voice Actors. The rest goes towards Kickstarter Fees for letting us use their service. We’ve divided the cost the best we can to make this both affordable and high quality at the same time.

In total, you would help create up to 23 NEW ARTISTS JOBS! And if we exceed our goal, we may be able to expand our team and create even more! We can’t thank you enough for your generosity in helping not just us but other artists looking for work. And, as promised, NONE of this money will be going to ourselves. Strictly any new staff for our production team and the pilot itself.

A comic that tells the story leading up to the original Kythera Zero Short! If we surpass our goals, this comic will be released to all $100+ Backers!!

If we we reach this goal, we’ll be able to rent out a space to work in together! This will make production faster and its a LOT easier than working online through meetings.

Growing up, we saw the beauty of 2D animated storytelling and action. It was always stunning to see the art come to life, gripping us with the characters struggles and emotions that feel so real they transcend the screen. That’s exactly what we want to bring to the table with K-Zero as our first major project! We’ve already shown what we can do on our own, but we can’t do a full pilot episode by ourselves. That’s where you come in! With your help and support, we can fully launch this project and pay our team to create an immersive action experience! Please help us on our journey to leave a mark in the history of animation! Oh, and you’ll get a few cool prizes along the way…

(Can be added as an additional reward with your contribution!)