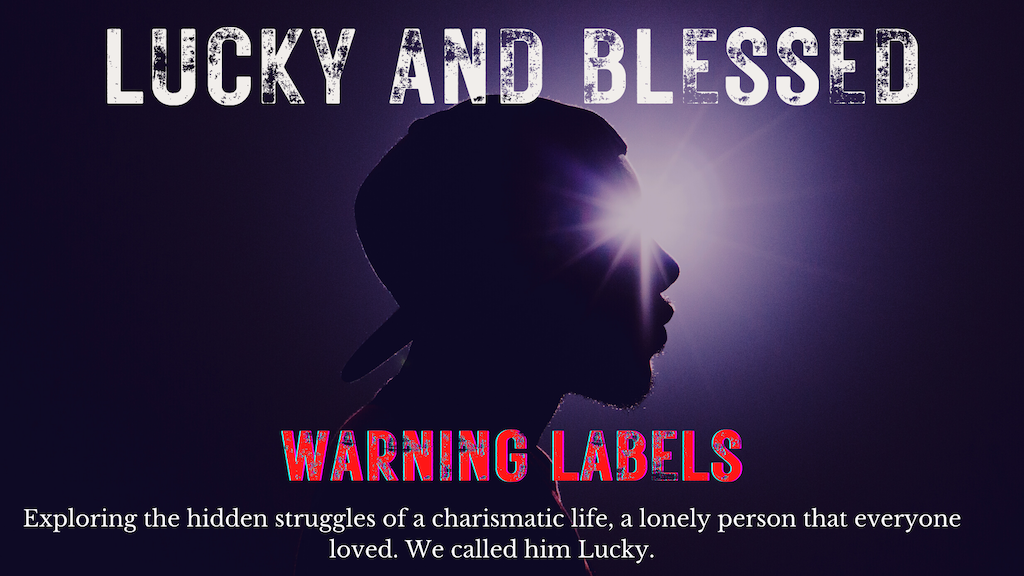 Exploring the hidden struggles of a charismatic life, a lonely person that everyone loved. We called him Lucky.

Lucky, a young rebel with a bright smile and golden heart meets his self-inflicted demise when he makes a permanent decision in a temporary state of mind.

Hello, my name is Reign, I am the Executive Producer of Lucky and Blessed Warning Labels. I plan to turn the worst tragedy of my life into triumph, and I need your help.

The worst day of my life was on August 21,2020, when I saw the doctors and nurses unplugging all the machines from my oldest son Lucky and call his time of death. They each offered their condolences, touched my shoulder with their heads down as they walked out the room one by one.

I stood there in a fog, praying that it was a nightmare, my thought in that moment was how? How am I standing here looking at a kid that was so full of life yesterday, the jokester, the dancer, the friend, the brother, the nephew, the father, the person that mattered so much to so many was now gone, just how? As his mother a part of me died that day, I wanted to curl up beside him and die too but I knew that wasn’t possible. I knew that God would give me the strength that surpassed all understanding and guide me.

Right now, I guess you are asking, what happened to Lucky? Lucky cause of death was a self-inflicted gunshot wound to his head. You see Lucky suffered from bipolar depression and at the time of his death he was also recovering from opioid abuse disorder, and all of this played a part in his untimely death. He made a permanent decision in a temporary state of mind. As I kissed his hand that day and lay it down beside him, I told him and myself that his life was not in vain. He was always loved, and he always mattered.

Lucky, born Antoine Malik Bates, was a rebel with a golden heart and bright smile. Lucky was the happy friend, he was the strong friend, he was a protector and if he ever called you friend or family, he would go to war for you. But he had another side, a side where he wasn’t the people’s champ, there was a side where he didn’t believe his life mattered no matter how much love you showed him, at times he didn’t feel worthy of that love or even life. Suffering from Bipolar Depression as well as recovering from Opioid use, on August 21st, 2020, Lucky passed away escaping the pains that were sometimes too much for him in this world, leaving a trail of broken hearts.

I am on a mission to bring awareness to mental health and substance abuse in a very real way by producing the documentary “Lucky and Blessed, Warning Labels”.

This documentary tells a story that is real, relevant and relatable to let people know you are not alone and there is obtainable help so you can live.

What shocked me the most was the amount of people who opened up and poured their hearts out to me about their children, immediately. It was like fear gripped them because they didn’t want to be sitting in the painful seat that I now sat in. I became a listening ear, a praying friend to people known and unknown. It seemed like so many people were reaching out. I really prayed about what else I could do, but I knew I couldn’t do anything right away because I didn’t even fully understand what I was going through or why.

A little later I started to put the pieces of my sons’ life together, his battles, his struggles and even his addiction and for some reason hindsight is 20/20. I started to study and research and reach out to friends, family and organizations to get a better understanding. I made a promise to my son that he would not be the family secret and I would tell his whole story, his whole truth in order to help someone else not have to bury their child or loved one.

I met a lot of wonderful people along this journey, one of them is Cammie Rice, founder of the Christopher Wolfe Crusade. She lost her son to an Opioid overdose and is on a mission to educate people on the Opioid epidemic. In one of our conversations, she said something that stuck so strongly in my spirit. She said it is out of natural order for a parent to have to bury a child. There is a name for most people who loses someone, if one loses a husband or wife, one is a widow or widower, if a child loses their parent, they are an orphan, but there isn’t a word to call a parent that loses their child, I believe it’s because the pain is so unbearable there is not a word in the human language that could describe the pain, however I am on a mission to push through this unreal pain and help others to live and enjoy their life and loved ones.

David Williams has signed on to team up with me and my team to make this project come to light. David and his experienced company Duffle Bag Films will be providing the crew, which will include the Co-Director, Director of Photography, the Gaffer, and sound recordist.

We are looking to raise funds for the production and release of the documentary “Lucky and Blessed Warning Labels”. Any help in the form of donations, resources, publicity and or word of mouth is greatly appreciated. We know this film will make a big difference and give hope to many who are suffering from mental health problems, substance use disorder and opioid use disorder.

To actually bring a film to life is very expensive. Kickstarter is a all or nothing which mean we really need to reach our goal to bring this independent film to actuality. We know this documentary will really start the conversation among people to seek the help for their love ones.  The money we raise for Lucky and Blessed Warning Labels will go toward, production,  crew, location, travel, lodging accommodations,  music composition,  researchers and analysist, festivals and marketing, insurance and Covid safety.