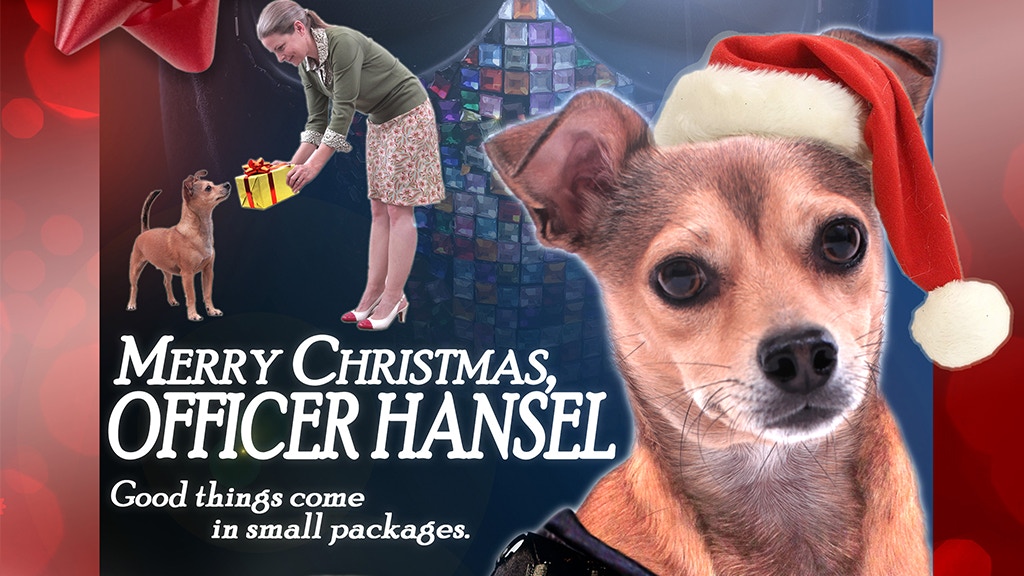 We are making a classic Christmas dog movie about a little dog who goes on a mission to stop a greedy package thief.

Merry Christmas Officer Hansel is a fun, G-rated Christmas story about a little dog who goes on a mission to save Christmas from a greedy package thief. It’s also about family and the love of a man for his dog.

On Christmas eve two years ago Officer Harkmore Wilson was badly hurt in an explosion in which his beloved K-9 partner Gobby was killed. Harkmore becomes a recluse until he is given an injured dog – Hansel – to care for.

Together they heal and return to work. Now a greedy package thief is ruining Christmas.

Hansel wants to go after the package thief but Harkmore won’t let him for fear he will be hurt. When Harkmore is distracted by the arrival of his Aunt Lucille and rock star brother Fillmore for Christmas, Hansel goes on a mission to stop the package thief and save Christmas.

When we started this project we were driven by a desire to make an uplifting, heartwarming movie about love and family. We love Christmas and the magical reality of a Christmas movie is the perfect place to tell a story about how family can be where you find it, in your ex-power lifter Aunt who raised you, your rock star brother who is convinced he’s British and, if you are lucky, a very special dog.

This movie is goofy, silly, fun but it is also about not underestimating someone because they are small or kind. And about the gentle acts of everyday heroism that hold a family and a neighborhood together.

The star of this movie is Hansel. As we were preparing this movie we began to realize that we have a very special dog actor in Hansel. He loves to be filmed and he understands and communicates more than we could have hoped. It’s his movie all the way.

As Hansel’s human co-stars, we started out in sketch comedy and have both starred in previous feature films. We wrote, produced and directed a full feature film, an action comedy that is distributed worldwide. We also made three award winning short films including SALT which premiered at the Chicago International Children’s Film Festival.

What separates this project from most on Kickstarter is that we have already shot most of the film and we have made and distributed movies before. This film will be finished.

This is your opportunity to show the world that there is desire for wholesome, heartwarming movies. You can support us by backing us and helping to spread the word about this movie. Tell a friend, tell four friends, tell everyone you know and help us make this film a reality.

When we started this project we knew we had the skills required to do it because of our past projects. So far we have shot everything ourselves with our own money. Now we need additional funds for post production. This will include bringing on a composer who will add a magical Christmas score, mastering and recording unique, original Christmas songs for the soundtrack and bringing on digital artists to add some special effects magic.

All of our backers will join our filmmaking family and you’ll follow the production of the film, get behind the scenes updates, and Hansel videos. Since we can’t count on any live screenings (due to Covid) we will try our best to bring this adventure directly to you.

There are some special rewards – including having your dog’s name in our list of Santa’s Good Dog Friends that will be in the credits of the movie forever. Or you can have your child’s name (or your name) in the credits in Santa’s Good Boys and Girls List.

We are inviting you to come along with us on our journey to make this Christmas dog movie that you can enjoy with your whole family, that will make everybody happy. Even though we know that this is going to be a tough Christmas – we’ll have something to look forward to that we can all enjoy together, next Christmas.