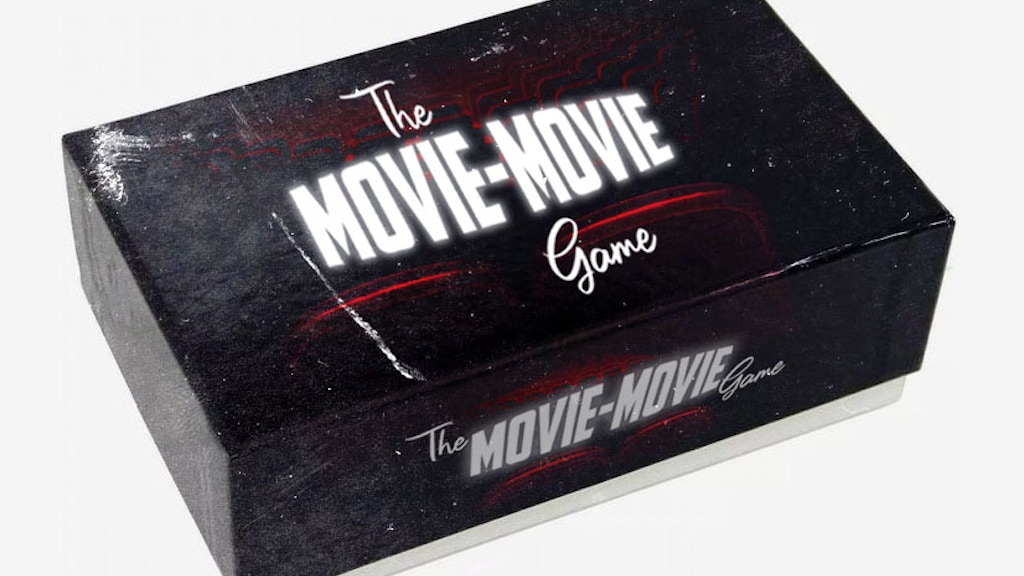 Movie Movie Game is a brand-new board game for every entertainment lover brought to you by The Valleyfolk, the creators of the popular Movie Movie Game series on YouTube.

In Movie Movie Game, you and your friends test your knowledge of popular movie titles in the stupidest way possible. Movie Movie Game forces its players to bend and twist their brains in ways hitherto unseen by modern humankind. Anyone can name a movie based on a loose outline of its plot, but Movie Movie Game combines titles in such a way that you’ll be dying laughing as your friend struggles to find the right way to say “Saving Private RyAnnihilation.” Pro-tip: The trick is to really let them squirm…

Movie Movie Game is the brainchild of Joe Bereta (Barats & Bereta, SourceFed, Smosh), who devised an ingenius way to aggravate his closest friends and colleagues. Don’t believe us? Well, he filmed it, so there’s that…

Now, The Valleyfolk is bringing the hit YouTube show straight to your living room with a PHYSICAL version of Movie Movie Game. It’s the logical next step in the journey of The Valleyfolk, because it helps you keep your sanity by driving your friends totally bonkers! So if you’re ready to confuse and amuse your circle of friends — in person or over a Zoom call — become a backer of Movie Movie Game! We’re also including optional expansion packs for all you TV and video game connoisseurs!

WHAT ARE THE RULES?!

RULES?! We don’t need no stinkin’ RULES! The truth is that you can play Movie Movie Game in any way you see fit. But we’re not going to leave you hanging, so here are some gameplay suggestions!

Each player takes a turn as the Director, and chooses a random card. The director reads the plotline to the player to the left. Each correct guess counts for 5 points. If they’re struggling, they may ask for a hint. Each hint takes a point off. We provide two hints per card, but if your friend isn’t a big movie buff, the Director may make up their own hint in whatever way they choose! The winner is the first person to reach 20 points or the person with the most points after a predetermined number of rounds!

One of the biggest obstacles to introducing a new game to your friends is the treacherous RULES. The icebreaker version of this game throws all that away. Rather than waste any time learning (gross, right?), just grab your deck of Movie Movie Game cards and throw out the plotlines as you see fit. Maybe over dinner or on a first date? Whatever works! No points, no winners, just laughs. In the end, everyone will sound dumb, and we think that’s pretty great.

The “LIGHTNING ROUND” style of playing allows each player to act as the Director, and whoever correctly guesses the title first wins a point! It’s a race to the correct answer as everyone in the room contributes to the verbal cacophony. First player to reach 10 (or 20, or 30) points, wins! Play until your heart is content, or until everyone feels they need a nap from all their thinky-brain exercising!

We believe two movie titles are better than one, so you can bet your butt we believe that two heads are better than one! With team play, partner with a friend, lover, relative, or all of the above. This style is especially helpful for those who aren’t quite movie buffs. You don’t want them to feel left out, do you? Plus, this is an excellent way to see how wrong two people can be at once, and that’s just good wholesome fun.

For bonus points, no matter how you choose to play, see if your friends can guess what *year* the movies came out in (don’t worry, we’re including that info on each card). You decide how many bonus points to give out, because only YOU know how hard it is to remember that Saving Private Ryan came out in 1998.

WHAT COMES IN A DECK?!

The standard Movie Movie Game comes with a whopping 300 cards in each deck. The expansion packs each feature a bonus 100 cards fitting either the theme of TV shows or video games, each combined with a classic (or obscure) movie title!

The expansion packs will also be available for separate purchasing, so you can come back later when you’re ready, on your time. We’ll be waiting.

Pending the success of this Kickstarter, look forward to more games which tickle your brain in all the right ways. Whether we’re smashing titles together, releasing new expansion packs with totally new themes, or creating physical versions of other games we’ve been working on, this is just the beginning, and we’re excited to see what happens along with all of you! We have already started looking into an online or app version of the game, as well — just in case this thing is very successful (No promises, as we are very dumb, but WHO KNOWS!) So sign up now to see how far this baby goes! And remember, no matter what happens, here’s looking at you, kid in king arthur’s court!