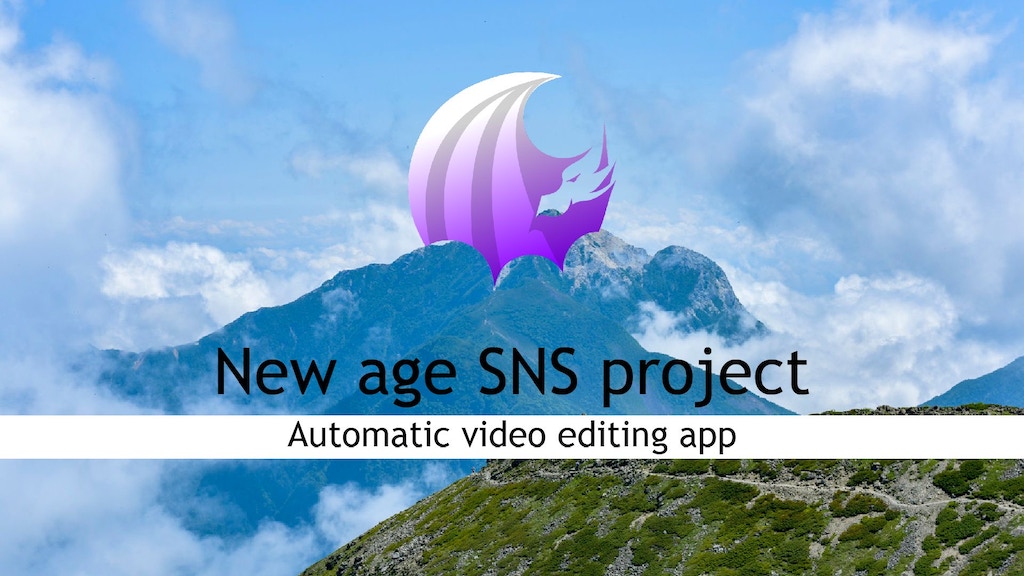 Development of automatic video editing application using AI.
It is a project to create a new form of SNS and evolve the times.

How much time do you spend on video production?

If you’re spending a lot of time, like 5 or 10 hours, we’re trying to fix the problem.

Now is the age of video.  All the events are shown in the video.  Most SNSs such as YouTube and Instagram mainly use videos.

What we are trying to make is the foundation of the times.

We are trying to make an automatic video editing app.

Of course, various automatic video editing services have been developed.  However, there are various problems such as high usage fees and a small number of materials.  Our services are cheap and have huge systems available.  Specifically, it’s about $10 a month.  You can use it by paying one meal.  If there is a cheaper service than this, please let me know.  Of course, the basic fee is free.

The era is next

Our project envisions the next era.  Until now, it was an evolutionary era.  Humankind and civilization have evolved one after another, enriching people’s lives.  TV appeared, mobile phone appeared, PC appeared.  Then, the Internet has emerged in the world, and smartphones have come into your hands.  It’s an era where everything is online and can be managed and shared at your fingertips.

Many people think this way.

“What’s next for smartphones?”

In my opinion, there is nothing second to smartphones.  No more new devices will appear.  Then, what kind of thing will rule the times next?

[The answer is the age of automation.  ]

Combine existing things well to streamline the achievement of things.  The means for that is automation.

In the next era, translation, driving, text entry, programming, everything will be automated.

And it is video editing.

By automating video editing, we will usher in the next era.

What you can do with an automatic video editing app.

There are many others.  Too many to write.

Our goal is to make it easy for anyone to create puzzle-like videos.  Anyone can easily create wonderful videos by rearranging animation materials and background materials.  There is a plan to make it possible.

That’s not enough.  Some professionals would like to do more precise editing.

We plan to create a dedicated platform so that even PCs can create videos.  This is the beginning of our project.

We are creating a new era of SNS.

As the title says, we are creating a new era of SNS. Build an SNS platform based on automatic video editing.

Allows video materials to be bought and sold between users.Icons, backgrounds, animations, CG, etc. Users can buy and sell various materials, and platform users can generate profits. The purchased material can be used immediately for your video production. It is a system that creates benefits for each other.

It is an SNS where creators gather, not people who watch videos.

Make a wealth of videos with your ideas and liven up the whole online.