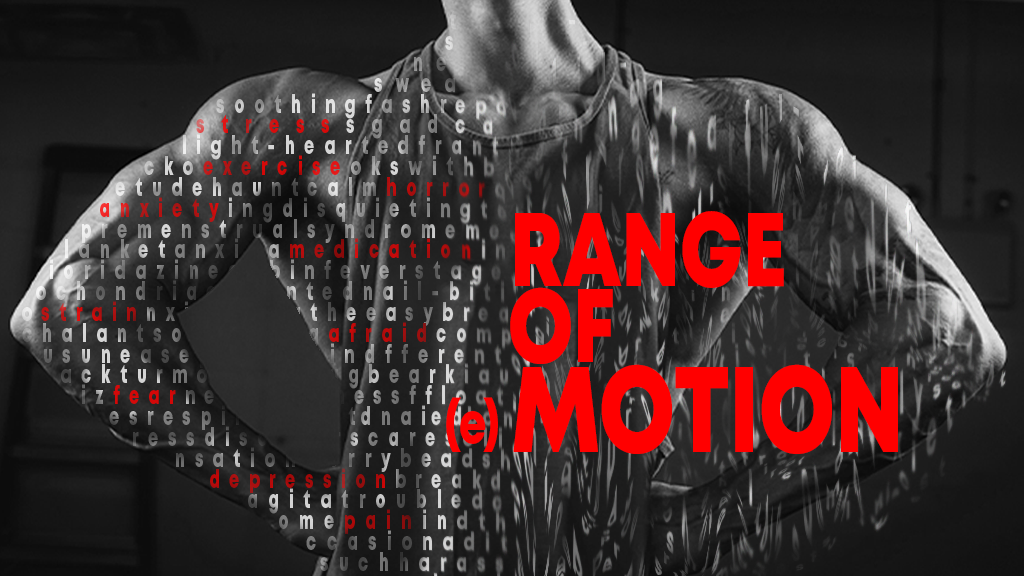 A series of documentaries focusing on people overcoming unique obstacles through the use of sports and psychology.

Mental illness is not personal failure.

RANGE OF (e)MOTION is a 9 part docu-series that dives into 3 incredible stories, from the perspectives of athletes who have survived life changing physical and mental challenges.

This docu-series aims towards helping audiences understand physical and mental health and how to communicate with people who have experienced traumatic events.

We have already started filming and are ready to finalize production once the fundraising is completed. We need your help to make this story come to life and inspire a generation to consider compassion over judgement.

Three true stories following a man from a foreign country persevering through 3 surgeries to come back and obtain his pro card in bodybuilding, A champion bodybuilder, who suffered 15 years of obesity and schizophrenia, and a young man who overcame almost never being able to walk again from a motorcycle accident, to competing and winning in a bodybuilding competition.

Each of these ordinary people share their journeys in life, and touch on many of the physical and mental challenges they have faced in life. Dealing with paralysis, schizophrenia, and depression, the hard work and competitiveness of these individuals gave them a second chance. They defied all odds, and chose to pursue the life they wanted to live.

SHANE DYCK has always been a natural athlete. His family was a huge motivator for him to stay active and compete in all types of sports. During his 20’s he was in a life changing accident, and took this as an opportunity to prove how willing he was to stay on top. He went to achieve the impossible, walking across stage and after years of preparation to win a bodybuilding competition. Shane continues to motivate and help others grow with his knowledge of business, life experiences, and public speaking. As a C5 Quadriplegic, Shane dreams of competing in the Paralympics representing Canada.

JAS DHALIWAL was ambitious to come to Canada for a better life, and more opportunities. He was a big star in Kabaddi, but after 3 major surgeries he needed to find a sport that was more safe for his health. In Canada, he turned to bodybuilding, and has been very close to obtaining his pro card. Jas is on the road to his pro card, and has many wins backing him up, in Physique Overall, Classic Champion, Mr. Manitoba, and Classic Physique. Nothing has stopped him from achieving anything he sets his mind to.

KRIS MANKASINGH was always athletic and competitive in bodybuilding, and won a men’s welterweight championship at age 20. A few years later he was diagnosed with schizophrenia, and gained more than 150lbs. During his 20’s he was still dealing with mental illness, and he rarely left the house. At his heaviest Kris was a staggering 315lbs, and in May 2012 his doctor told him he had under 2 years to live. At 35, Kris needed to make a change, and he began exercising to lose his weight. Six months later, and after an extensive skin removal surgery, he had lost 130lbs. In 2016, Kris competed for the first time in 18 years, and at 157lbs he won as a natural bodybuilder.

DIRECTOR & EDITOR – ERIC CURT PETERS is an independent filmmaker, editor, and colorist, based in Winnipeg, MB. As a content creator for the last 8 years he’s worked with many brands, and artists with commercial work and music video production. With a passion for video and storytelling, he is always working hard to achieve his goals.

PRODUCTION ASSISTANT/ KEY GRIP – MARY ROSE is a Photographer and Artist based in Winnipeg, MB. She started through drawing, painting, and graphic design but now her passion is in connecting with people and storytelling through photography. Mary Rose has great interest in lighting and is an aspiring filmmaker/cinematographer.

CAMERA OPERATOR – DARRYL PALAPUZ is a creative director based in Winnipeg, MB. He started out as a photographer during High School and soon became a cinematographer while attending University. His passion for storytelling can be traced back to his childhood where he enjoyed watching movies on their VHS. Darryl currently works part-time as a camera operator, lighting technician, grip and editor on local independent film productions. His main career goal is to become a Director of Photographer for a major production company.

JOSH MANKASINGH is a photographer/artist recently based in Calgary, AB. He has a passion for art that creates a meaningful story, and enjoys trying to convey emotion and feel through the use of a camera. He hopes to one day become a published independent artist.

We are currently looking into other funding for this documentary as well as spending up to $30,000 of our own funds to start this project. Below are some of the costs that go into the production for the documentary.

Each of these documentaries will take hundreds of hours to film and edit, including sound design, scoring, and marketing, and our team has already put in 100+ hours each into this documentary so far.

There are a lot of people who have given us their time and support for this project, and we truly want to make sure that we can pay them to tell their stories. All of the money will greatly benefit everyone involved in the project, and any funding that goes into this documentary above what we are asking, will be put towards even more development into these documentaries. Our goal is to have at least $100,000 to put into this documentary so we can invest full-time hours into this, and potentially reach out to streaming platforms, and theatres.