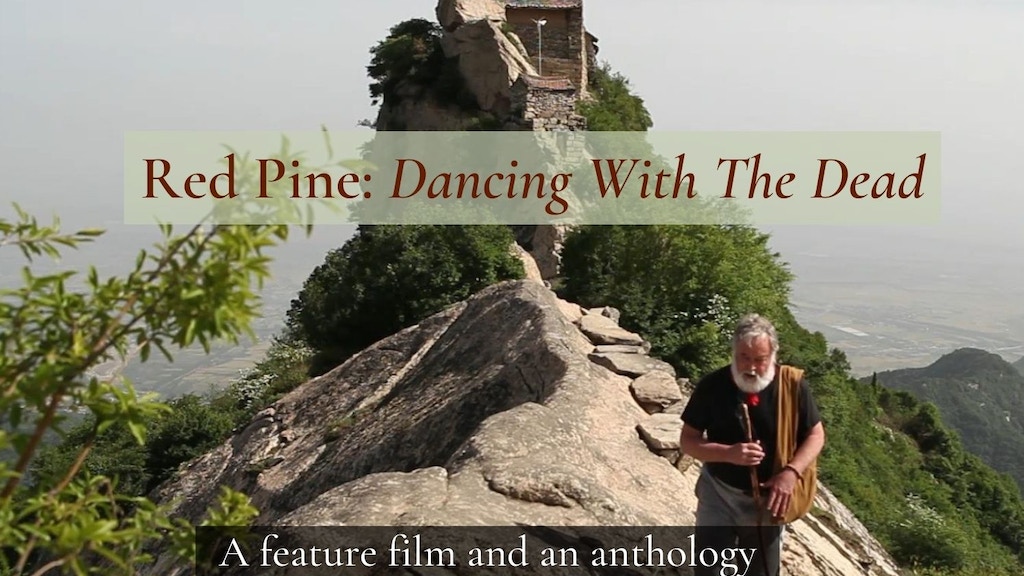 A documentary film & book celebrating the life and literary art of Red Pine, translator of Chinese poetry and Buddhist texts.

Help fund a book-and-film collaboration between Copper Canyon Press, a nonprofit publisher dedicated to poetry, and Woody Creek Pictures, a production company focused on “films dedicated to the common good.”

The film-makers—Ward Serrill and Rocky Friedman—are creating a feature-length documentary utilizing interviews, animation, archival footage of Beat poets, and gorgeous scenes from Chinese television programs to tell the story of the extraordinary life and literary art of Red Pine. Concurrent with the film, Copper Canyon Press is producing an anthology of ancient Chinese poetry translated by Red Pine.

The organizations are collaborating to raise a minimum of $80,000 to ensure the completion of the project in time for a 2023 release date. All funds raised will be shared between organizations.

“Red Pine” is the pen name for Bill Porter, who is one of the world’s finest translators of ancient Chinese poetry and Buddhist/Taoist texts. He has written and translated over twenty books. He is a best-selling author in China, with books about mountain hermits and travel narratives on visiting the graves of Chinese poets. Red Pine is also an eccentric character and world-class raconteur, who has been featured in Chinese television documentaries, and is now the subject of a feature-length documentary film nearing completion. Red Pine’s biography includes:

As Red Pine says, “Every time I translate a book of poems, I learn a new way of dancing. The people with whom I dance, though, are the dead, not the recently departed, but people who have been dead a long time. A thousand years or so seems about right. And the music has to be Chinese. It’s the only music I’ve learned to dance to…. For me, this means a tango with Li Bai, a waltz with Wei Yingwu, a dance with the dead.”

Dancing with the Dead is the title for two creative projects slated to appear in 2023:

The documentary film—directed by Ward Serrill and produced by Rocky Friedman—tells Red Pine’s story through interviews, animation, archival footage of Beat poets, and gorgeous scenes from Chinese television productions about Red Pine. Ward and Rocky’s documentary was well underway when the global pandemic forced the cancellation of a necessary filming and research trip to Taiwan. This Kickstarter campaign will fund that critical trip to Taiwan, as well as the post-production work required to finalize the film for theatrical/festival release in 2023.

The anthology—forthcoming from Copper Canyon Press, a nonprofit publisher—will present the best of Red Pine’s Chinese poetry translations as the latest addition in the “Essential Poems” series. This series includes such luminaries as W.S. Merwin, June Jordan, Jim Harrison, and Ruth Stone. This Kickstarter campaign will fund the myriad hard costs associated with publishing, including editorial, printing, promotion, distribution, and especially paper costs, which have risen approximately 45% over the past year.

All funds raised by this Kickstarter campaign will be shared equally between projects.

What Writers Are Saying:

Red Pine has earned best-seller status in China. In the United States his translations have been praised by leading writers. Here are a few choice quotes:

W.S. Merwin: “Love of language, love of tradition, accuracy, and power of language. I am so indebted to him. I’ll be reading Red Pine’s translations for the rest of my days.”

Ward Serrill is the award-winning writer and director of The Heart of the Game, released by Miramax to wide critical acclaim as well as The Bowmakers, produced by Rocky Friedman. He has created more than ninety short films including Building One House with Robert Redford and Wild America with Sissy Spacek. His fourth feature, Dancing with the Dead: The Life and Times of Red Pine, is in production. Ward’s memoir, To Crack the World Open – Solitude, Alaska, and a Dog Named Woody is published by Girl Friday Books.

Rocky Friedman owns and operates the Rose Theatre in Port Townsend, Washington, one of the most treasured independent theaters in the country. He graduated from the University of Southern California’s Department of Cinema in 1976. In 1992, he helped restore and reopen The Rose, which had closed its doors in 1958. At the time of its restoration, the theatre was recognized by the Department of Archeology and Historic Preservation as the last surviving nickelodeon in Washington State. Rocky helped launch the Port Townsend Film Festival, has brought opera, ballet and theater simulcasts and silent films accompanied by live music to Port Townsend, and is a co-founder of the School of Athens Lecture Series. He was named Business Leader of the year in 2016 by the Port Townsend Leader.

We believe poetry is vital to language and living. For 50 years, we have published extraordinary poetry books from around the world to engage the imaginations and intellects of readers. Our catalog includes books in dozens of languages by poets from around the world. We publish Pulitzer Prize-winners, Nobel Laureates, and emerging poets alike. Our nonprofit status enables and requires us to place art above profit, and creative freedom above the whims of the marketplace. We are able to operate in the name of aesthetic excellence and cultural relevance specifically because you and other visionary community members share this value. Not unlike public radio stations, we rely on the support of donors and backers like you.

We must raise $80,000 by Wednesday, June 1 in order to receive any of the funds pledged to this Kickstarter campaign. This amount will help cover the costs of designing, printing, and distributing Red Pine Dancing with the Dead: The Essential Translations, and will move the feature-length documentary film into the final stages of production and editing.

Each pledge to this project helps us sustain our community-powered models of getting poetry–and a beautiful film—into the hands of those who’ll benefit from this art.