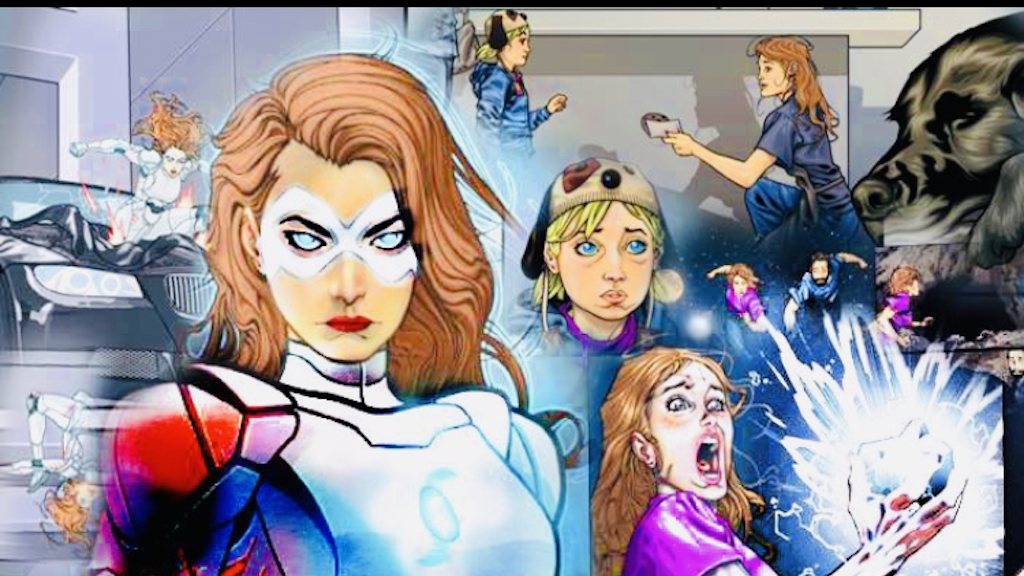 We all have a story, and this is mine. My name is Daniel. As a kid, I struggled with a learning disability, a speech impediment, and an anxiety disorder. For the longest time, I lived in fear of being rejected because of my differences, and was afraid of anyone knowing my story. So, I turned to a different kind of story. Within these tales, ordinary people donned capes and masks, and used their amazing powers to save the world.

This was my place. In these imagined worlds, I could be who I truly wanted to be. I could be brave. I could be myself. But there was just one problem: I couldn’t fully relate to these characters because they weren’t going through the same challenges I was. I searched for years trying to find the stories I needed, but without success. So one day, I said to myself, if no one is going to create these stories, I’m going to make them myself.

That was how it all began.

And now, our first story as a company! As our first venture into the world of superheroes, we are laying the foundation for a brand-new superhero reality, where heroes with and without disabilities save the world, side by side. This is the forging of a new superhero dimension: the Courageous Comics Universe.

With mighty force, we are bringing this new universe to life with the story of Serenity. Meet Kristi Powers, also soon to be known as Serenity. This is her origin story of how she went from being an ordinary blind woman, a humble owner and operator of the Pals and Paws coffee shop, to suddenly having her life forever changed! In a startling transformation in a mysterious cave, Kristi finds herself with newfound superhuman powers derived from the emotions of other people. Now, she must put these new abilities to the test in a mission racing against the clock: rescue her best friend’s little girl from the clutches of a notorious kidnapper and killer terrorizing the city of San Francisco.

Her story will be told in our first full length graphic novel and exciting audio drama. This audio drama will bring together a talented cast of voice actors and a dynamic team in creating this fully immersive audio experience. Not only does it boldly retell the story of Serenity, but it also serves as an accessible companion, so that people of all abilities can enjoy it!

With such a tremendous project, we knew we would have to assemble an amazing team to bring this vision to life. So let me introduce some of the key players of the Courageous Comics team!

Daniel is the founder of Courageous Comics and a comic creator, writer, concept artist, disability and mental health advocate, and natural-born storyteller. Growing up, he always had a passion for superhero stories and dreamed of creating his own. As Daniel grew, he felt a desire to blend his passion with a real and tangible need. That need was to create fresh and new characters, so that children with disabilities could see themselves in heroes. Combining his own story and personal experiences with a learning disability, speech impediment, and anxiety disorder, Daniel hopes to guide Courageous Comics into a worldwide brand that will empower people of all abilities and mental healths, impacting the world for good by sharing their previously-untold stories.

Chris Black is a writer, content creator, and the co creator of Serenity! Growing up, Chris had a huge passion for creativity, particularly the creativity and storytelling found within video games. It was this passion that led him and Daniel to become close friends. Over the past 10 plus years, Chris and Daniel have together generated many ideas for stories and co-authored the story of Serenity. Although he does not have any direct personal experience with the world of disability, Chris is also passionate about stories that that promote kindness, compassion, and the dignity and value of all people.

Ethan Lang is a social media creator and aspiring writer. Ethan joined the team in 2019, and since then, he has made a big impact. He’s brought to life some amazing pieces of social media content to help spread the word about all things CC! Ethan one day dreams of working in the video game industry,

Jayson is father and self-proclaimed nerdy husband with a passion for all things superhero and Disney. He has a huge heart for those who are hurting, marginalized by society, and feeling that they don’t have a voice.  A recent addition to the CC team, he is excited to bring all these passions together.

Caleb is what you would call a jack-of-all-trades. He is a video producer, editor, and disability advocate. Caleb has been with Daniel from the very beginning of CC, and he’s  made numerous amazing contributions to the foundation and framework that made Courageous Comics what it is today! He is also the fantastic producer and editor behind the original launch trailer and this very Kickstarter video.

Authenticity is one of the cornerstones of what we are seeking to build, so it is highly important to us that our characters and stories accurately portray the real world. So, meet our consultant teams and new friends! They have been with the Serenity project since its origin in 2019.

Kristin and Daniel connected while attending a non-profit retreat that served families with loved ones with disabilities. It was there that Kristin shared her story of living with a degenerative eye disease, and through her personal faith and life journey, she had learned to embrace her disability. She was thriving as an online health coach and wife to her Air Force pilot husband, Hunter, a disability advocate. After hearing what Kristin had shared, Daniel knew he’d found the perfect first story.

Then, as destiny would have it, Erica James and her husband Jake James joined the adventure! Over the next few years, they teamed up with Courageous Comics to create the basis of Serenity’s character.

As a blind Paralympics hopeful and gym owner, Erica came on board initially provide some voiceover, but very soon became an integral part of the Serenity project. She and Jake quickly jumped on board for the development of the Kickstarter trailer, with Erica starring in the trailer as the titular character and Jake acting alongside her. Beyond these contributions, Erica and Jake’s relationship has inspired that between the characters of Serenity and her husband Wyatt Powers.

Our Plan and Budget

Now that you’ve heard the story, you might be asking, what’s the plan? Our goal begins with an exciting fundraising campaign that will run from June 1st to to June 30th. During this time we hope to raise our full project cost of $70,000.

Once we’ve raised our funds, let’s talk schedule! Our timeline goal is to immediately go into production with a projected goal of getting all our rewards to our backers by September 25th, which is National Comic Book Day! Fitting, right?

The following funds will be utilized to bring to life all the parts of our project. Firstly, approximately $30,000 of our funds will go towards the main product itself, the graphic novel. We’ve sourced a fantastic artistic team to illustrate Serenity’s full feature comic book debut!

Secondly, we determined it will cost us $20,000 to produce the audio drama. All of the of money allotted for this part of the project will be utilized in bringing together the amazing cast of voice actors, audio engineers, sound mixers and musicians to create an immersive audio experience in order to make the story of Serenity accessible to all.

Thirdly, let’s talk about the fun stuff, merch! We are so excited about Serenity! We have tons of ideas for fun and accessible products, so all of our Serenity fans can rep her in style! We’ll be starting with the basics, such as hats, shirts, stickers, art, unique collectibles, and of course, coffee mugs! (After all, our gal does run a coffee shop!) For this final part of the cost, we’ve allotted $10,000.

Lastly, but certainly not least, is the logistics. Let’s face, it as anyone launching a new product knows, there’s a lot that goes into making sure that all supporters of this cause receive their rewards! With the remaining $10,000, we will ensure we deliver on the goods!

So, friends, thats our story! We hope you enjoyed learning about Courageous Comics and our leading lady, Serenity! We are truly excited to be on the verge of introducing a whole new superhero universe, and new superhero, to the world of comics and beyond.

This has been an extraordinary journey so far, and we want to continue the adventure! For a few of us, it has been a 15-plus year dream in the making. For others, it’s an exciting new venture and first dive into the world of superheroes! But for everyone involved, there has been a uniting factor, a goal and dream much bigger than CC alone! It’s our mission to see a world where people of all different abilities, young and old, change the world through personal stories. This is a world in which we will see more stories bridging the gaps between communities, more paths to empathy, compassion, understanding, strength, love and courage! A world where children of today’s generation, and generations to come, who live with disabilities can look to heroes who are just like them, and open their imagination to a world of possibilities for them! But to see this through, we need your help!

Will you join us?