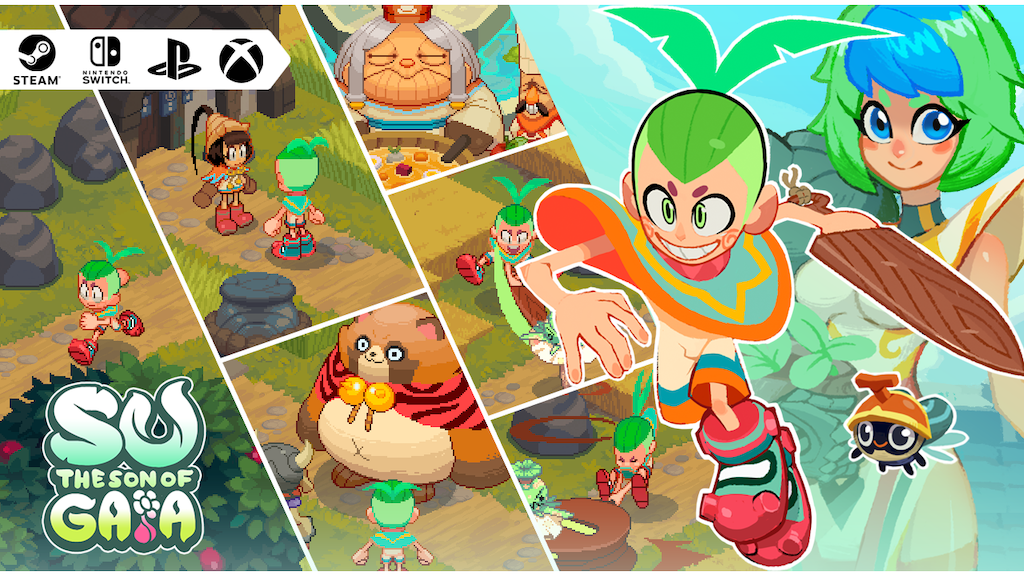 A beautiful pixel art game inspired by the golden age of ACTION RPGs.

SU the Son of Gaia is inspired by games that marked us for their memorable graphics and gameplay. Breath of Fire IV had splendid pixel art, Boktai had a strategic battle system, Alundra was a classic Action RPG with challenging puzzles, and many other unforgettable games from the 90s. We tried to mix these elements to create our universe with a fresh gameplay, and an amazing story.

SU the Son of Gaia is a pixel art Action RPG game that takes place in the Land of PANACEA, a majestic, natural and pristine place where ecological balance is maintained thanks to machines created by Gaia. One day, this balance was broken by mysterious creatures called Umbras that altered the natural order and the ecosystem began to fall ill.

Follow the journey of our hero, SU, in his quest of:

Restoring the balance of Panacea’s ecosystem

Helping and curing the villagers affected by these mysterious diseases

Fighting sinister enemies around all the land of Panacea

GAIA has built powerful robots that help Panacea’s ecosystem and its villages.

Gearpetto has at his service powerful puppets that appear as powerful bosses in the game, which once defeated will grant useful powers and items.

Botans are healing plant-like beings, and the leaves on their heads have been used to create medicinal brews since ancient times.

With their help, SU is able to create various antidotes that will heal the sick NPCs in the game.

With an still unknown origin, these strange creatures started appearing in the surrounding forests of the Veggie Village, and from there spread their diseases through the rest of all the land of Panacea.

Recent investigations on the matter found out that they have a special appetite for botan leaves. SU will seek to stop them and, if lucky, find a solution for them.

● They come in multiple shapes and sizes, each with different combat patterns.

● Parts of their bodies are made of mercury, which makes them highly toxic although it is also their weak point.

The island of PANACEA is made up of 6 villages each with an exotic and unique culture. Although these are the main locations, in their surroundings you will find explorable wild areas.

PANACEA is a world full of wonders where you will find villages such as:

● The Snowy Lands of Pen Pen

● The Demonic Mountains of Domon Drogon

● Each village has a series of missions that the player must complete in order to advance to the next village or area, the new areas appear on the world map as new points to explore, in a similar way to BoFIV or Super Mario World, you can go back to the areas you’ve already explored whenever you want.

This and so much more can be discovered in SU the Son of Gaia!

● Fun interactions with NPCs, chatting with NPCs is a fun and exciting task, meeting them will be key to knowing more about the lore of the universe and to understand what’s happening, you’ll also get ideas for how to heal the disease that afflicts them.

● Exchange of objects and sidequests.

● Beautiful expression portraits that will help with the flow of the dialogues, and hint the NPCs mood.

● Create bonds with the NPCs by helping them or giving them gifts, they will repay you if you earn their trust!

● Find and rescue the Botans from the Umbras.

● Interact with NPCs, help them in sidequests that will allow you to know more about Panacea’s history and myths.

● Clean the contaminated areas by fighting the nearby Umbras.

● Explore the land of Panacea and its secrets in a vibrant and colorful isometric pixel art, with a fantasy anime/cartoon style.

● Witness and take part in different events that will be available at a certain time during Panacea’s day and night cycle system.

● Befriend an Ally NPC in each village, who can become an useful ally throughout the game. But you must first earn their trust.

Weapons: SU will have 3 main weapons that can be used in different situations: Sword, Hammer and Hand-Cannon (you start the game with the sword, and get the rest throughout the game). They provide you with different attack patterns and speeds, so you can choose how to face your enemies. You will also be able to solve small puzzles with the help of your weapons.

Each weapon has an unlockable skill tree that will allow SU to improve his offensive and defensive capabilities, offering you different playstyles.

● SU’s animations are made by professional ANIME animators, this gives a beautiful touch to all his movements.

Gaia’s Lab will be a recurring place!

● You can investigate each house by clicking on different objects inside them to learn more about the lore of the game and their inhabitants.

● Upon entering a house, its interior will be displayed as an illustration, and you will be able to interact with the internal elements and NPCs, as in a point and click game to discover secrets and information.

● All Botans possess unique attributes that can be combined to craft the necessary antidotes to cure the sick NPCs. You must find out their symptoms through dialogue and craft the adequate antidote.

● Once you craft the antidotes, you can cure the sick NPCs through a mini game that will eliminate the viruses causing the disease one by one as you play. Succeding in this mini game and getting the NPCs cured will boost your reputation with them and with the whole village!

● The NPCs are sick with various viruses, you must identify which is the suitable antidote to exterminate them.

● PETBUGS will act as pets in the game, they will join you through the adventure and some will have to be found, they will enhance you in combat by giving you different attributes.

● You’ll be able to craft equipment, brew potions and antidotes, and upgrade your weapons using a vast inventory.

● You can combine a wide variety of items to create potions and food useful for your adventure, as well as improve your equipment and weapons.

You can find one special minigame per village, with arcade mechanics where the objective is to beat the score of the NPCs and your own, this will add replayability to the adventure.

SU the Son of Gaia has a high level of musical production. Duvin Silva (Dunamis Producer) is a music producer with years of experience in the field. This instrumental track reflects the nature of our game, inspired by our greatest references Hiroki Kikuta, Shogo Sakai and Koji Kondo.

Zeoarts Inc. is a studio founded by Raul Velasquez in collaboration with Victor Pineda in 2019, with the goal of developing indie video games. SU the Son of Gaia is our main project on which we have worked hard all these recent years. Today we are a solid team with incredible talents, everyone with vast experience in video games.

Our game is being made with a lot of love and our staff is made up of very young qualified people and also figures that we respect and admire.

We have 3 top-notch collaborators artists on our team!

We love their games and having them on our staff makes us feel like a dream team. They have created for Su the Son of Gaia powerful BOSSES and other characters that you will discover!

The current plan is to release Su the Son of Gaia for Steam on the Windows platform first. Once we pass our Console Stretch Goals, SU the Son of Gaia will also be coming to Nintendo Switch, Playstation, and Xbox!

SU the Son of Gaia will be released in English and Spanish. In our final release we will have all these languages available.

Our game has a clear concept developed over several years in a huge document, the Map and Gameplay have been worked with love and self-financing, uniting a multidisciplinary team. This work represents our love letter to the world of video games, so we are committed to finishing it because we love what we do, we have a solid Demo with all our mechanics already designed, but the development of assets for a game of this magnitude will take time. With the support of the Kickstarter community, SU the Son of Gaia can become a reality in less time and be enjoyed in the homes of all who feel captivated by it.