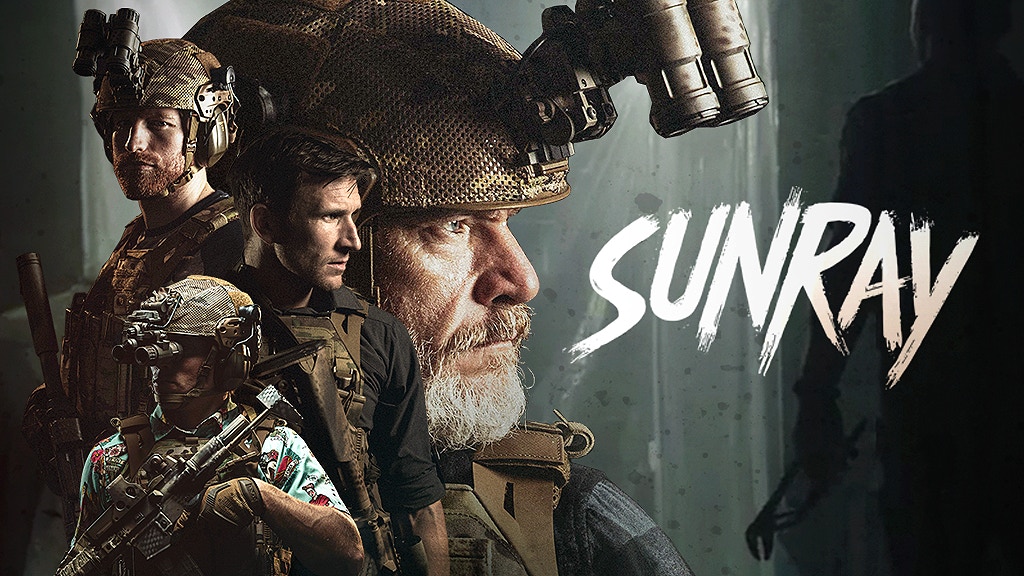 A web series created by a cast and crew formed of former Royal Marines inspired by real life experiences of war and military life.

“A collective of former Royal Marines Commandos take the law into their own hands as they struggle to reconcile with their past.”

SUNRAY is a 5 part short series inspired by the personal experiences of a collective of former Royal Marine Commandos turned filmmakers and actors. Having lived, suffered and experienced the direct effects of combat we have lost friends, we have lost family and we believe that the emotional connection to whats ‘real’ will enable us to convey a deeper, richer, real life story of the women and men who sometime’s pay the ultimate sacrifice even when they do make it home.

Set across five short episodes each between 15 to 20 minutes in length – SUNRAY is not another story about war heroes or valour in the face of overwhelming odds and cliché motivational speeches before battle.  SUNRAY is a human story, exploring the veteran psyche and the struggles of reintegration back into civilian life set against a backdrop of fast-paced action where realism and high-quality military drills will guide every creative decision. To achieve this, we will not only be drawing from personal experience but also receiving specialist advice from former special forces operators and using real-world tactical equipment. Using realistic imitation firearms and a cast of former Royal Marines turned actors we want to create an immersive world which caters for an audience who long to see true to life action on screen.

The story follows the ECHO team of four former Royal Marines Commandos; all retired from service, who have found themselves disillusioned with the civilian world and battling the complexities of Post Traumatic Stress Disorder (PTSD) and most prominently survivors guilt. The deceased no longer suffer – death is not the ultimate tragedy of life. Sometimes it is those who survive who suffer the most. Finding it difficult to reintegrate into society with mandated therapy proving fruitless, they band together to achieve something that they believe will make a difference in the world. After witnessing first-hand the unspeakable actions of a top tier UK crime syndicate, the group use calculated and merciless application of force to wipe them out one by one. Utilising their aptitude for violence and precise planning, the team embark on a series of operations to bring down this syndicate who are heavily entangled in drugs, human trafficking, acid attacks and public executions. Meticulously and violently working their way up the distribution chain to find out who’s pulling the strings, and eliminating them the only way they know how.

Our unique cast consists of three serving and one former Royal Marines Commandos all turned professional actors. Their combined decades of military experience in real conflicts allows them to effortlessly employ tactical skills and drills as well as drawing emotion from real situations and memories.

Introducing Tip Cullen (@tipcullen) as our lead protagonist Andy. Also known as Echo 1 or ‘SUNRAY‘. Tip served 29 years with the Royal Marines deploying on operations globally bringing unprecedented real life experience to his character. After leaving the Royal Marines Tip achieved a BA Hons in Acting from Plymouth Marjon University and has been performing in theatre shows across the UK and has starred in television adverts and independent productions.

Introducing Tom Leigh (@velvetthunder123) as Echo 2, ‘Smudge’. Tom served 7 years deploying globally on operations specialising in long range reconnaissance and electronic warfare. Tom turned to acting after being medically discharged from the Royal Marines. He has since acted in numerous TV/films including His Dark Materials, The Kings Man, Dracula, Big Brother, House Hunting, Soldier On and Merry Wives of Windsor.

Introducing Sean Lerwill (@seanlerwill) as Echo 4 or ‘Harper’. Sean Lerwill is a former regular and now reservist Royal Marines Commando. He undertook the full Meisner training at the Actors Temple in London and has since worked on a number of Tv, Film and Commercial projects around the world. Writer/director of Amazon TV shows, author of 7 published books including the Haynes Guide to Royal Marines fitness and international cover model for men’s health and men’s fitness.

The first episode of the SUNRAY series has been written, re-written and then put through the mill once again for good measure. The construction of the first episode script has then enabled us to construct a full narrative curve which has provided a guide as we continue to write the following four episodes. The richness of the story and severity of action will be purely based on the level of support from you guys. With the aim to shoot all 5 episodes over a period of three weeks and the frame work in place we are literally taking a knee and awaiting further tasking to see what level of ‘bang’ we can deliver to you guys.

Having studied film, media and drama from a young age I took the next natural step and joined the Royal Marines aged 20 (pretty sure I got lost on the way to film school). Deploying to Afghanistan I found myself in an alien place, in a land of extremes. This inspired me to pick the camera back up and I haven’t put it down since. After specialising as Recce Operator I continued to grow my military knowledge and experience those things in life that money could never buy. Seeing the light and two severely damaged knees later, I decided to turn a passion into a career and transferred to the Royal Navy as a photographer. A diverse role which can range from hanging out of a helicopter one day to capturing a portrait of the Royal Family the next; it enabled me to build a foundation, make my mistakes and meet some of the greatest and most unique people in the world.

Whilst struggling with my own mental health, I felt isolated, unsupported and let down by the service through its lack of support, integrity and duty of care. On the cusp of losing everything, I began to translate my thoughts to paper, a means of therapy to vocalise the demons niggling within. Fifty post-it notes later I had the frame work of a story, fifty days later I had a script and a supportive team that cared about the project as much as me. Dan and James gave me the support I needed, both brimming with integrity, knowledge and individual skill sets that have complimented the progression of the idea to this point.

I was a Royal Marine for 9 years but am now a military photographer and freelance cinematographer. Being able to document the lives of other military personnel is something that has been my passion ever since I joined. Deploying and having the ability to experience the weird, the wonderful and the surreal, then documenting the human reaction to that through a lens is the ultimate bounty. After transferring to the Royal Navy as a photographer I felt the human element always came secondary to the equipment and hardware, the helicopter or the submarine; this was my motivation for SUNRAY.

To develop those stories, those dits in a creative, entertaining way with a cast and crew that has lived it, loved it and despised it. This enables a level of authenticity that is un-measurable. SUNRAY is the human element in its rawest form and a production I am proud to be part of.

After studying computer graphics at University and initially wanting to enter a creative industry, the prospect of a taking a desk job for the rest of my life prompted a complete change in direction and somehow resulted in joining the Royal Marines. My five years in the Corps went fast as I spent most of my time deploying with 40 Commando all over the globe. I always felt I had a keen eye for making visual media stand out – an ability that I have now translated to the role of a Royal Navy Photographer, a job that gives the best of both worlds.

My passion is finding and conveying relatable human stories and then developing this into an engaging medium for an audience to enjoy. SUNRAY as a storytelling platform facilitates my inner passion by turning fact into fiction sharing those untold stories in an entertaining way. Working closely with Dan and Sam it’s apparent we all have our own individual strengths and weaknesses, skills, knowledge and operational experience. This diverse skillset enables us to check all boxes and create something that we believe everyone can relate to.

SUNRAY is more than a series, we hope that in time it will develop into a platform that will enable us to create weekly content that will directly support serving Armed Forces and veterans alike. The series is essentially our explosive method of entry into the industry. Using already established veteran brands it would be our mission to share their stories through an entertaining and creative manner, often taking direction from our audience to what they want to see next.

Thank you for supporting SUNRAY! All levels of support are greatly appreciated. If you are not in a position to back us at this time, you can still support us by sharing our project on social media. We can’t wait to put SUNRAY into production and share it with you all.