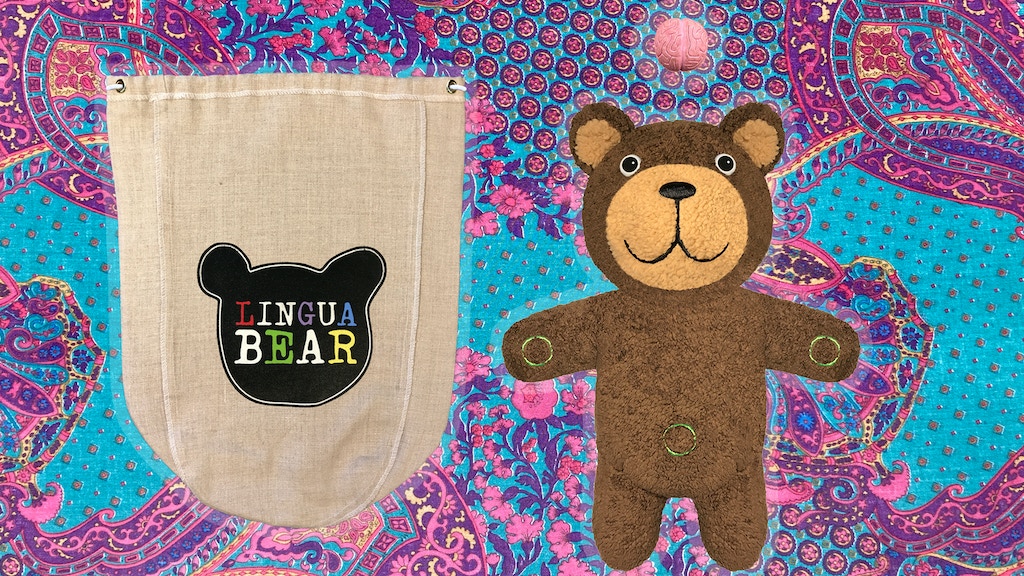 *Thank-you gifts at the bottom of the page and will be delivered late November 2021! Visit www.linguabear.org to learn more about this project and watch this Instagram video about our factory. Content Creation Fund. (YOUR DONATIONS ARE TAX-DEDUCTIBLE!)

“Our values, beliefs, customs, and behaviors are coded in the language that we speak. The loss of a language implies the loss of a particular perspective on the world…”

-Dr. Fernando Rubio, Director of the Second Language Teaching and Research Center at the University of Utah

We are a nonprofit organization focused on promoting language diversity and revitalization—with the help of our mascot, the Lingua Bear™ toy!

Lingua Bear was designed with the environment and broader society in mind. It aims to incorporate all languages, regardless of their “usefulness” for international commerce and communication. We recognize that people are the driving force for preservation, and that we can have a significant impact on glottophagy by facing the taboos associated with speaking indigenous languages.

So far, we have created a functional prototype, set up a content creation program, selected our factories, recorded two demo languages, sourced eco-friendly materials, worked out manufacturing logistics, and are in the final stages of developing our website. Toy production begins in  Salt Lake City, Utah, and concludes in Xonacatlán, Mexico.

The funds we raise here will go directly towards producing the first run of Lingua Bear toys:

Our toy provides a window into how people think and use different languages via an original listener-based acquisition model that incorporates corresponding words and phrases in both English and a target language. We specifically focus on lesser-known languages, such as Guaraní from Paraguay, and feature major language dialects, such as Japanese from Osaka or Spanish from Oaxaca. Through our work, we aim to raise awareness about language extinction in the 21st century and empower the communities most affected by linguistic and cultural homogenization.

Why We Do It

So what are the reasons for maintaining linguistic diversity apart from the basic need for communication? One may argue that having fewer languages could potentially optimize it—but that’s not the whole story.

Learning languages has been proven to help people of all ages stay cognitively fit, and more importantly, language and culture are intimately intertwined. Our values, beliefs, customs, and behaviors are coded in the language that we speak. The loss of a language implies the loss of a particular perspective on the world, resulting in a more limited ability to deal with the challenges that all societies face. Linguistic diversity is important for the same reasons that ecological diversity is crucial. Just like biology tells us that diverse ecosystems are more likely to survive and thrive, the lessons learned from history show us that the most culturally diverse societies have been better able to overcome challenges and prosper. Any effort to preserve and protect a language and its culture from extinction is an effort to protect humanity’s amassed wisdom and knowledge.

It is hard to say exactly how many languages were spoken at the peak of linguistic diversity—but if one had to guess, it would be around 10,000. And they are disappearing at a rapidly accelerating rate. There are approximately 6,700 languages existing in the world today and we are losing one language every 13 days. At this rate, we could lose over 90 percent of our languages by the end of the century!

In order to reduce our ecological footprint, we incorporated interchangeable language cartridges (brains) in our design. They eliminate the need for entirely new toys for each additional language. The toy’s brains and other internal components are made of upcycled plastic, and its organic-plant-fiber bag is meant to be reused for collecting brains.

Lingua Bear is sewn in Xonacatlán, a Nahuatl speaking town tucked in the Sierra Nevada mountains about an hour from Mexico City. In an era of app-based learning tools, our plush toy stands out by featuring collectible characters providing the user with a highly kinesthetic learning experience.

For now, we are referring our customers to a third-party solar charging unit, and have plans to create a more sophisticated original design that enables quicker and more convenient solar charging. Currently, you can use conventional AAA alkaline batteries or AAA solar charging NiMh batteries made from environmentally friendly materials. We avoided lithium batteries in our design because they have been known to cause fires.

Our listener-based acquisition model helps us create a window into how a language sounds and functions while highlighting its unique idiosyncratic features. Through the different lists of words, phrases, and songs we hope to capture each language’s ethos, taking inspiration from Nasa’s Golden Record Capsule sent into space in 1977.

Each language package (or brain) includes 21 different lists of words, phrases, and songs in the following order:

4. Days – days of the week or equivalent

5. Seasons – seasons based on the featured language’s local climate

6. Months – months of the year or equivalent

7. Time – words having to do with time

8. Space – words having to do with space

9. People – words referring to relatives and the human body

10. Senses – senses and corresponding parts of the body

13. Animals – found or known where the language is spoken

14. Edible Plants – found or known where the language is spoken

15. Verbs – conjugated in the present tense and 2nd person imperative

19. Music – song in the target language

20. Music – song in the target language

21. Music – song in the target language

We use English as our auxiliary language because of its status as an international lingua franca. Our human resources model involves working with ELF (English as a Lingua Franca) schools, language teachers, and other target language community members to help us create custom scripts reflecting the true spirit and functionality of their languages—colloquial idioms, culturally relevant nouns, humor, verb conjugations, and more.

Once a script is formalized, we select two charismatic voice actors who can read the script in both the target language and in English. At times, we make accommodations for readers who are articulate in their native language but whose English is not sufficiently proficient. In these cases, we pair the reader with a surrogate English speaker.

(SPEAKING IN NAVAJO) Hi, my name is Rose Jakub, and I am the Navajo translator.

Our content team is financed primarily through grants while engineering, production, marketing, and distribution will be funded through the sale of the Lingua Bear toy. The content team is made up of project managers who are responsible for guiding the translation and recording process. When their task is complete, they submit their work to an audio engineer who edits and masters the recordings. These recordings are in turn used to program the virtual and physical Lingua Bear toys. The physical toy and its brains will be available for purchase on our website.

The effects of globalization on language will be difficult to slow down, and as a result many languages may die off. For this reason, we are linguistically codifying our data so that it may be used to recreate lost languages with the help of AI. Our accumulated wisdom, knowledge, and history live in our languages, and we may be able to preserve them if we have the dynamic data to create language oracles that would embody a language’s grammar, phonology, pragmatics, and other integral nuances. We are also dedicated to improving the Lingua Bear design and engineering while remembering that kinesthetics are an important part of every child’s learning experience. We hope to improve the toy to be all cuddle and less bulk, and to continue to reduce our impact on the environment.

THANK YOU FOR YOUR SUPPORT! WE COULDN’T  DO IT WITHOUT REMARKABLE LANGUAGE REVITALIZATION ADVOCATES LIKE YOU!