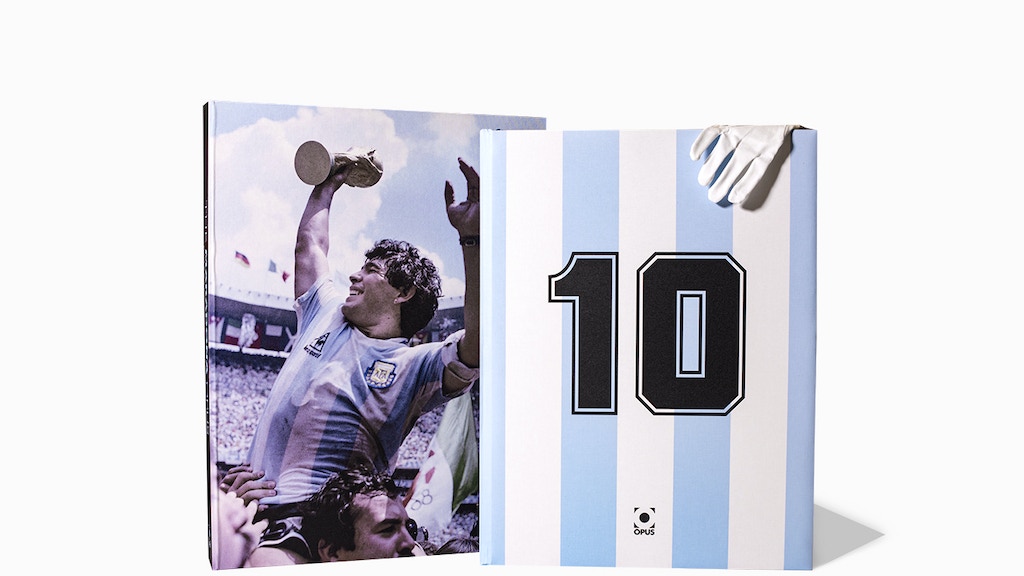 The Maradona Opus is the ultimate tribute to honour the legacy
of arguably the greatest footballer the world has ever seen.

Even if I played for a million years, I’d never come close to Maradona. Not that I’d want to anyway. He’s the greatest there’s ever been.”

The Maradona Opus is the result of an official collaboration with the now departed footballing genius, Diego Armando Maradona. Charting the journey from his humble beginnings playing street football in the shanty town of Villa Fiorito, to his crowning glory of captaining Argentina to World Cup success in Mexico ’86, and beyond. Maradona’s career is celebrated through a collection of wonderfully evocative photographs reproduced on an unprecedented scale.

The Maradona Opus is limited to 1010 copies and each one contains a special signature sheet individually hand-signed by Maradona and mounted onto the inside cover of the Opus.

From one legendary footballer to another, the Opus features a personally-written foreword by Edson Arantes do Nascimento – otherwise known as the great Pelé.

The Opus also comes with a beautiful 12” x 16” photographic print, presented on a heavy-duty archival paper stock with a satin finish.

The Opus features rare and unseen photography from Maradona’s own private archives, including those from his formative years as a footballer.

Specially-commissioned essays from award-winning chief sports writer for The Times Matt Dickinson, and others, lay the foundation for each chapter, and Dickinson also contributes an exclusive interview piece crafted from several sit-downs with Maradona. A multitude of quotes from Maradona himself, and a selection of teammates, opponents and admirers – including the likes of Jose Mourinho, Gary Lineker and Lionel Messi – add an extra level of insight.

Weighing-in with a combined weight of 15kg, the Opus is presented in a luxury, handmade, cloth-covered magnetic presentation case, adorned with an iconic image of Maradona lifting the World Cup trophy aloft in 1986. It comes complete with a pair of white gloves to protect the Opus whilst viewing.

The size of the Opus has to be seen to be truly appreciated, with each of the 250 pages measuring a gargantuan 46cm x 60cm. Previously, the Opus is pictured alongside a regulation size 5 football to demonstrate its actual scale.