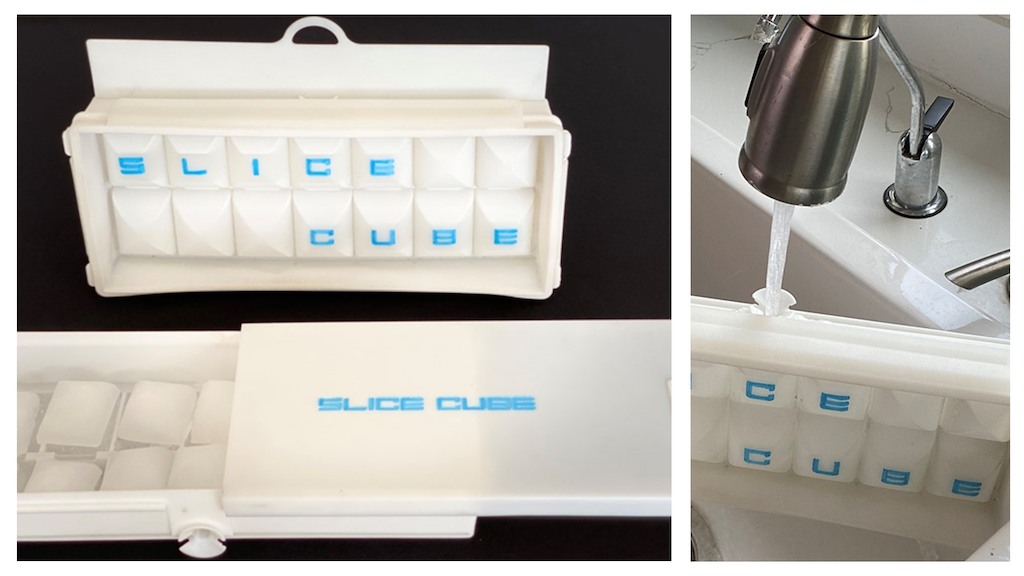 Finally a better way to make & store ice. A simple system/cycle that makes 2 trays at once and stores another 2, so you never run out.

The Slice Cube will change the way people make and store ice for years to come.

It solves ALL of the issues of the OLD ICE CUBE TRAY!

Part #1: Easy to fill and it makes 2 trays at once

The Slice separates the 2 Trays

Transports to Freezer without spills

Sometimes the best ideas start with something simple! The Slice Cube started with the goal making of simply making more ice at once, but we incorporated physics and psychology to create a product we feel will be a game changer for millions of people, worldwide.

The Frustration – We were always running out of ice

We had 3 trays, but some were empty, half filled and when we needed ice, we didn’t have enough. Humans tend to procrastinate and if there’s still some ice in the freezer, why fill the empty tray after we take the last cube right?

We wanted a way to fill more trays at the same time. We were obsessed with volume. Bang for the buck. If we’re going to make the effort to fill something, we wanted more than a few cubes from it! So we set out to snap 2 trays together, fill them and separate with THE SLICE

We then set out to tackle other issues we had with the traditional ice cube tray. (which has had a great run-since 1933)

The Next challenge – Make it easier to fill and transport

Part of the reason empty trays get left in the freezer is the hassle of filling and transporting them. Nobody likes the back and forth action required to fill a tray and the awkward walk to the freezer without spilling. It’s just an awful system.

Since we already had 2 trays stuck together, putting the fill hole at the top was simple. Then we had to make it big enough so it was easy to hit, so we added a built-in spout.

Ok so we drink too much, that’s besides the point. Some people like cold water, others smoothies…We want cocktails and Margaritas! Who’s judging?

Either way, ice is nice! We wanted more ice without extra parts everywhere. This took awhile and involved engineers, who are super smart and surprisingly good partiers! They figured if we had 2 base trays, we could use 1 base tray and a sliding lid to store and serve the ice, while the other base snapped onto the upper tray and made ice. When the storage tray was empty, simply swap the lids and fill.

The result was a complete “mind blown” moment! This was no longer a bunch of independent parts, but an actual cycle and humans understand cycles. You don’t break a cycle. You keep it going. 3 independent trays in the freezer are not a cycle, but rather a poor system. The Slice Cube is a cycle, a super simple one.

There really is nothing else to do with the 3 parts other than snap them together, fill and Slice!  Even teenagers won’t put the 3 parts back in the freezer without putting them together and filling it up! (ok, no guarantees on that one)

Next Challenge – Keep the junk out of our ice cubes

The engineers fixed that already, remember the sliding lid for the storing tray? So the one part of the cycle is completely sealed and making ice, while the other has a sliding lid which keeps the “stuff” out of your ice

As it turns out, the Sliding Lid also eliminates another headache people had with the traditional ice cube tray…the retrieval. Sometimes the cubes don’t come out easily and when we tip the tray over, we get more cubes than we want and they spill in the freezer or counter!

With the tray attached, you can simply shake the tray upside down and loosen all the cubes, making it easy to grab as many as you want.

After many (so many) prototypes and so much product testing (aka drinking parties) we finally settled on what we believe is the World’s Sexiest ice cube! It’s got plenty of size (we know size matters) and it’s rounded bottom looks so good. Plus it allows the cubes to exit the tray so that it can find its happy home in your welcoming drink!

The original idea was born in May of 2017, when we had unexpected guests arrive only to find 3 ice cubes in the freezer! The drive into the city for ice was the catalyst! It was an idea born out of genuine frustration.

The process has been long and full of unexpected obstacles and several prototypes that were good, but NOT GOOD ENOUGH. We wanted the Slice Cube to be a great product, that people loved and recommended to friends. After 40 months of work, we finally have a product we want to share with the world. The Slice Cube is an absolute JOY and once you use it, you will NEVER want to use a traditional ice cube tray again.

Amazingly Simple! Now that it’s been perfected, tested and proven,  we’re ready for our very first production run. The world’s very first SLICE CUBES will go directly to you, our supporters.

We decided to limit the countries to which we will deliver due to the low price of The Slice Cube and it’s relatively high delivery charge to places we may not have many sales. If we get enough requests from certain countries we will open it up.