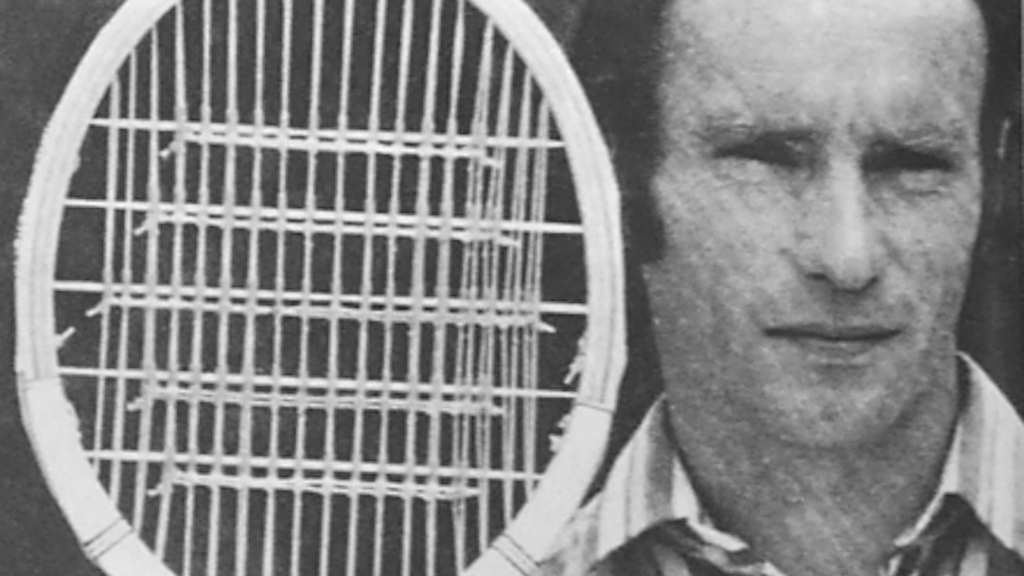 In the 1970s an earnest young gardener from Bavaria invents a mysterious tennis racket.

After his lowly village team starts to win with it, news leaks to the pro tour. ‘The most dangerous racket ever’ is adopted by canny old-timers and brash hippies who conceal its secrets from baffled opponents.

Revolution is brewing in the game.

Glory beckons for the racket and its believers, but they have made powerful enemies. Panic seizes top players, equipment companies and the tennis authorities.

Controversy swells to a crescendo; the future of tennis itself is at stake…

With a colourful cast mixing offbeat unknowns and legends like Ilie Nastase and John McEnroe, this is a quixotic tale of dreams, triumph and disaster in the golden era of tennis.

In 1977, tennis was entering the golden age of Borg, Connors and McEnroe. During the summer, the International Tennis Federation (ITF) began receiving reports about a mysterious new force on the circuit. Major tournaments were complaining of upsets, with seeds losing to lowly-ranked players using a strange double-strung system on their rackets.

At the US Open, Mike Fishbach, “an amply-bearded refugee from the satellite circuit”, pulled off the biggest shock of the tournament. Using a racket double-strung with gut, fishing line, tape and twine, Fishbach trounced top player Stan Smith.

Back in the halcyon days of ‘77, there were no restrictions on racket design. That same year, the US Tennis Association President, Slew Hester had asserted you could play “…with a tomato can on a broomstick, if you think you can win with it.”  But the authorities soon revealed a more draconian side in response to the Spaghetti racket threat.

The origins of the crisis went back to 1971, when Werner Fischer, a gardener from the hamlet of Vilsbiburg in Germany invented a new stringing system. With its intricate, double-strung weave and unique mix of special cements and nylon tubes, the “Spaghetti” racket produced unexpected spin and bounce.

Soon, the local tennis team, which had until then languished in the lower divisions of the German League, began to win matches. By 1977, the obscure part-timers had achieved an unprecedented four successive promotions. They had risen, against all the odds, to the pinnacle of German tennis – the Bundesliga.

News of Fischer’s invention and its success quickly spread. Following Mike Fishbach’s run at the 1977 US Open, there was an explosion of interest on the professional tour.

At the Paris Open, the following week, George Goven, another Spaghetti racket devotee, dumped tennis great Ilie Nastase out of the tournament.

Incensed, Nastase called on the ITF to ban the racket, declaring that from now on, he would refuse to play against anyone using one. Yet, at the next tournament in Aix-en-Provence, in typical Nastase-fashion, the mischievous Romanian arrived, armed with his own set of Spaghetti Rackets.

The tournament at Aix was a wake-up call for the ITF.  Three of the semi-finalist, including  Nastase, were using the Spaghetti racket, with only World No. 1 Guillermo Vilas keeping faith with the traditional racket.

In the final, Vilas, who at the time held three of the four Grand Slam titles, and was on a record unbeaten run of 53 matches on clay and 46 on all surfaces, faced Nastase.

Billed as the old racket versus the new racket, the final turned out to be a one-sided affair.

Finding no answers to the power and accuracy of a Spaghetti racket-wielding Nastase, Vilas abandoned the match, and walked off court in disgust.

The Spaghetti racket had finally come of age, but not for long…

The ITF made a crushing response. For the first time in seven centuries, the laws of tennis were changed to define “ the tennis racket”.

The new rule was carefully drafted to outlaw the Spaghetti racket and only the Spaghetti racket. The ITF didn’t ban another contemporary innovation, one that was being promoted by someone with considerably more contacts, cash and clout than a Bavarian gardener.

After making his fortune pioneering laminated skis, Howard Head retired at the end of the 60’s and took up tennis. He spent $5,000 on lessons but was so inept that his local pro soon refused to teach him. Undettered, Head simply decided to build a new racket. In ‘74, after a dozen unsuccessful prototypes, Head woke up from a dream with a ‘Eureka’ flash of genius telling him to “make it bigger”.

Head’s new “Prince” racket was lighter than its wooden forerunners, easier to swing, boasted a larger sweet spot and greater power. Unlike Fischer’s racket, which was difficult to master, the Prince was a ‘cheat’, a racket which made the sport easier to play. It promised to popularize tennis and was hugely attractive to big business.

There was widespread criticism that the Prince racket would adversely affect the sport, but the ITF allowed it, whilst outlawing the Spaghetti. This was despite the Spaghetti racket being merely a clever re-configuration of the stringing surface, compared to Howard Head’s top-down redesign of the racket itself.

While Head’s racket took over tournament play, starting with Pam Shriver reaching the US Open final in 1978, the ITF moved to end Fischer’s hopes.

During a court case in Omaha, technical demonstrations and player testimony were used to prove that Spaghetti stringing spoiled the ‘character’ of tennis. Meanwhile Head, a businessman of genius and a regular on popular TV talk shows, played the system for all it was worth.

THE SPAGHETTI RACKET tells this David-and- Goliath tale with humour and nostalgia, through the remarkable personalities involved and memorable actuality from that golden age of tennis. Through the central story, we illuminate wider issues such as the relationship between technology and sport. We also address controversial questions: Why was one invention judged more dangerous to the sport than the other? Was it simple economics, or were other forces at play…? And how has the outcome affected tennis today?

Since the Prince appeared, racket technology has irrevocably changed the sport. John McEnroe and other  former players have often lamented how tennis is now dominated by power unimaginable in previous eras.

Meanwhile, it was McEnroe who played the last ever match at Wimbledon with a “normal-sized” wooden racket in 1982. Oversized composite rackets began to roll off the production line in their millions, and Werner Fischer went back to tending his plants.

I had a vague memory of the the Spaghetti Racket as a tennis-obsessed child growing up in 1970s Iran.

One minute there was news of this invincible, Excalibur-like racket toppling top seeds at tournaments and then nothing. It was as if it had disappeared off the face of the earth.

After visiting the Wimbledon Museum and seeing the racket in the flesh for the first time, my interest was piqued.

I wrote a treatment and shopped the project around, but at the time no one was interested, few even believed the story to be true.

By this time, the story had well and truly gotten under my skin. I persuaded my brother and an old school-friend to help me make the film.

It took us two years to track down the inventor, Werner Fischer and another six months to persuade him to trust us to tell his story.

What finally clinched the deal was me  promising to have a finished film within the year.

What I hadn’t factored in was the cost of the archive. Sports archive is staggeringly expensive. As a consequence, the film has been a state of semi-finished limbo for the past four years.

During this time we’ve had interest from the BBC among others, but the cost of the archive has always been a stumbling block.

During lockdown, I persuaded Mr Fischer that we should take our project to the internet. Perhaps with a lot of luck and a little strategy, we could reach out to the global tennis community and rally them around this forgotten yet colorful slice of tennis history.