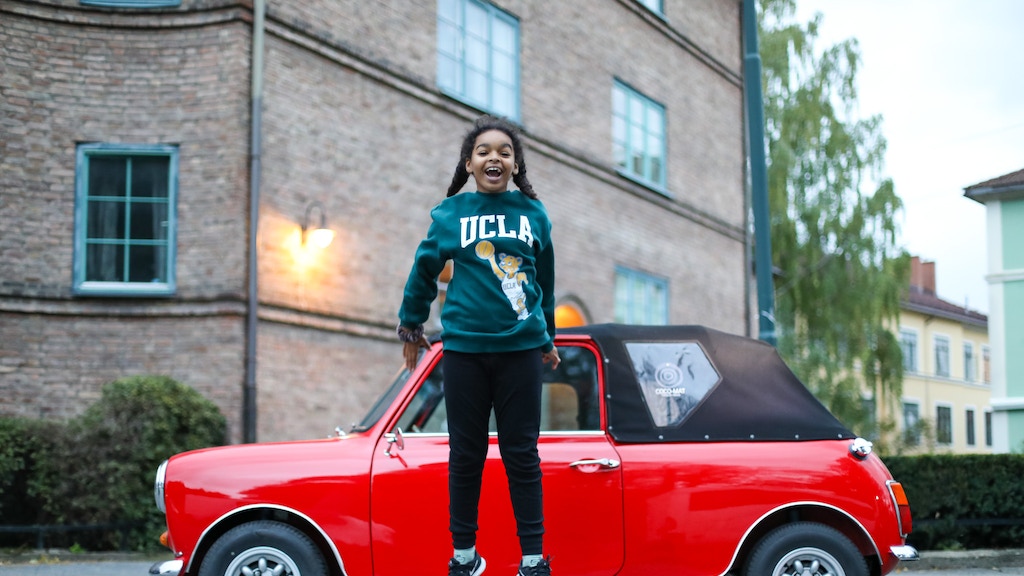 An Uplifting True story about the coming to age of a little girl that finds her passion is to be a Comedian like her big brother.

The movie is uplifting and about the coming to age of my little sister that finds her faith in herself by looking in all elements in Basketball. Earth, Water, Fire, Wind

She thinks she is The last Earthbender after watching Avatar: The Last Airbender

My sister is 11years old and a very awesome kid. We grew up as Refugees, and dreamers because our parents didn’t show us man kindness worst but the joys of life, we turned into young good-hearted grown sons and daughters and welcoming to all people and all languages. We worked ourselves to these positions to be able to tell our stories.

Our goal is to bring back the Big brothers and sisters programs with art projects, singing, painting, sports and build the fundamentals of future generation and projects for other kids have adventures with their older siblings

I built a brand and stage name to get this far now I want to get the next generation ready. A movie to protect our Roots.

Schedule of the Production:

Research and Development of the Script and screenplay: 2004-2020

Brian North is a humble veteran comic “gifted with Joy” to get all his friends greats deals of lifetimes shows, and he is not afraid to stretch himself to get them everything even if cost him his passion.

While he is trying to get a comedy tour from Norway to Spain deal from his New Age thinking manager Charlotte, aka his big sister who sees through his deceit and he agrees to the deal, only to later discover she sold his passion from just a 2-Netflix Special.

That night, his sister magically appears at his front door cause his parents got dragged by the cops. stuck with the kid over the weekend waiting to call immigration to find out what happened. He tries his little smile and laugh and forget her worries like his parents showed him. They share cereal for dinner and watch the legendary Childhood Classic Tom and Jerry and laugh all night long.

Spend the Saturday walking all over the city with smiles and having ice and Dancing and smiling. “This Is Me” is a song performed by Keala Settle for the film The Greatest Showman.

We would to license the song for the movie or ask Keala Settle to perform the song on camera with us as a thank you for not making us feel like outcasts wherever we went, We were home.

Every word that Brian speaks, he gets more thoughts about quitting his job and be a full-time big brother at least till she turns 18years old and heads off to college. Why shouldn’t he help his family when he has everything he needs in life.

His sister starts laughing at him for being too serious, he is a Clown, there are meant to spread joy and worry less.

He doesn’t want his sister to be in the foster system, the kid will perish and lose her roots. We are Proud Ethiopians, we belong to the Nile. On Monday He will find out if his parents are safe or not.

He cant send his sister back home if no one can watch her in that small house, as will Brian will go on tour soon. After a long day call a night fun and Sunday rolls by.

Brian Spends the Sunday showing sister how Sunday is Funday. While the kid is smiling and laugh he choose to bring his camera and his Friend and Day #1 Gucci Flako to film a short clip for fun. They end up having the time of a lifetime.

At the end of the day, he gets a phone call from his big sister to discover that his sister had lied and that she was just sick of being home because of the Covid-19 and that her parents had been in the house watching the news in fear and scared of leaving the house because virus and fear begin so high panic has made is hard for her to feel safe and have fun as a kid. what has the world has come when a kid doesn’t feel safe at home when the parents are scared.

Brian decides to follow her home and pack her bag and come stay over till Christmas and his parent said yes since they didn’t want to even exit the house out of fear.

Brian starts to cancel all of his shows and wants to back out of his talk with Netflix and focus on being a Big Bear Brother. His big sister is the smart one who tries to convince Brian to host a local show to pay respect to his godfather who owned the theatre stage where he first got his first paid comedy show, only 7 years earlier and talked about how important to be better brothers and sisters to each other.

As he goes back he breaks down outside in tries and finally realizes and everything was just in front of him. He is The Last Ra why should he leave when he can just host local shows where he grew up watching legends go up.

With that Brian forced to pick and choose how he tells his sister that he doesn’t want Netflix nor any deals but just to spend more time with his family to spread the joy in his house and local shows.

She walks out on him when she thinks his sudden silence is due to his not loving and respects her new age thinking of just money and fame. When he tries to explain the younger generation is more important than the future she thinking for him, she doesn’t believe him. Only brian’s agent Anni realizes he is telling the truth and goes to Brian’s calm while his stressing about his life.

Brian buys a food truck so he can open a small restaurant with his small sister. Now he works on his jokes and watches his little grow up to get the food truck one day. He still does his local shows at nights to share his gift of laughter with others

After every night they give food to the homeless and donating his gig money to charity after each show to support his local business and new family.

With his life awesome, Brian finds his big sister Charlotte works as a Netflix producer. , They respected that she told them, I didn’t want money nor fame so that they offered her a job working with the comedians she manages for the 2021 Netflix specials.

To thank me she offers him the deal of a lifetime his been looking for. 2 Netflix specials to air in 2024 as thanks for being patient with his life.

Charlotte tells him to make peace in all of his relationships.

With just one person left, Brian tries to reconcile with his unbiological Mother who raised him in the refugee camps all those years.

Life is hard but fun, but it only gets harder and funnier

“I’m sorry you for not being there”.

Brian understood to try to relax and his problems will fix themselves. He woke him up the next day feel on top of the world. First-year of kingdom

Brian and Charlotte get back together to work on the Netflix deal, with Brian buying the another Foodtruck he calls his agent Anni and asks her to run the food trucks with his little sister. Her demotion causes her to finally tell Brian that she loved him since she no longer worked for him but with him, thus he gets his own little life a happy family. Happily ever after.

This is the true Story of Berhan Kndeneh / Brian North

We wanted to say thank you Netflix for coming in to save our passions when we need hope the most. We are filming one last project as a big film crew family.

The project #seesomethingsaysomething with Netflix. Our project got green-lighted for 2021.

The interview that started it all. Enjoy

This movie is inspired by Ninja Turtles, The last Airbender bender, The greatest showman, Imagine that & A Thousand word, Then longest yard (classic and Remake), and Boyhood.

Thanking the Legends for inspiration