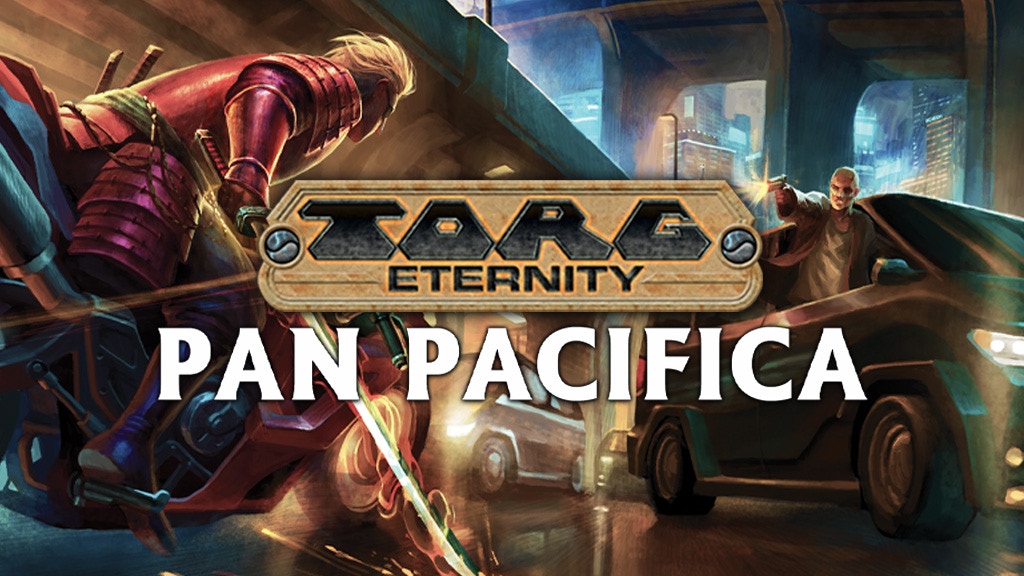 Pan Pacifica continues the Year One storyline for Torg Eternity!

The Pan Pacifica Sourcebook details a cosm of corporate intrigue and ruthless competition, where a handshake upfront often distracts just long enough to land a knife in the back. Direct power is too visible, so soft control is exerted through social means such as universal basic income and apps on the ubiquitous Zuzu smartphone.  Well-placed character assassinations in the media are often a prelude to the more direct violence of corporate assassins and Kanawa security forces. The cosm extends from glittering nightclubs where corporate spies mingle with status-seeking executives and thrill-seeking GeneMods, to remote island laboratories where new threats are crafted.

The PanPacifica Sourcebook in a deluxe leatherette, gold-embossed cover.

The PanPacifica Sourcebook in a hand-bound real leather, gold-embossed cover.

Delphi Missions: Pan-Pacifica is part of a series of adventures designed to enhance any Torg Eternity campaign. Each of the ten adventures inside is suitable for an evening of play and may be dropped into an existing story or played on its own. This product contains adventures for Alpha and Beta Clearance Storm Knights written by returning Torg icons, including John Terra, Tracy Sizemore, and Brian Reeves. Industry names like Leamon Crafton, Jr., Sean Roberson, and Nathan Smith join in to add their own spins to the corporate intrigue of Pan-Pacifica!

New foes to battle and challenges to face!

Operation: Soft Sell is an adventure that has the character taking the role of Agents of Operation: Eris. Before they can be found by the Delphi Council, the characters are recruited as Agents to gain the confidence of and access to the inner circle of the former Kanawa CEO, Ryuchi Kanawa.

The Agents will have to work closely with the Kanawa brother and assume the guise of Stormers as they gather information on what he is planning while on the run from Pan-Pacifica authorities. As Ryuchi’s chosen confidants, the Agents will go on a journey that takes them across Pan-Pacifica earning them a reputation that brings them at odds with fellow Storm Knights!

The Pan Pacifica GM screen is a sturdy three-panel depicting several viewpoints of a Storm Knight heist just as things are about to get rough, really rough. But you do not have to worry, on the other side of the screen is the information you need to smoothly run your next Pan Pacifica adventure. Are the Storm Knights doing the heist? They should probably worry.

The archetypes span a variety of themes and play styles. Mysticism and martial arts with the Priest of Palan, GeneMods with the Feline Transhumanist, the clandestine corporate warfare of a Heist Mastermind, the more direct approach of the Corporate Assassin, and more. Players can jump right into the Pan Pacifica action with any of these archetypes.

The package contains twenty high-quality acrylic tokens for keeping track of Possibilities in play. The tokens have full-color illustrations of Reiko and Ryuchi Kanawa, xenogospog, storm knights and foes in Pan Pacifica.

Composer Ralf Kurtsiefer’s music brings an extra dimension to adventure in Pan Pacifica, covering gunfights, betrayal, the piratical mini-cosm of Malagwa, electric samurai battle, and even a reality storm! Set the perfect mood for your next Pan Pacifica session with this music.

A sturdy, foldable, 34″x22″ dry-erase sheet with two full-color maps (Downtown Street and Island Assault, one on each side) designed by Alida Saxon for use with your Pan-Pacifica adventures!

A sturdy, foldable, 34″x22″ dry-erase sheet with two full-color maps (Lab and Railway Station, one on each side) designed by Alida Saxon for use with your Pan-Pacifica adventures!

This is a beautiful foldable neoprene dice-rolling tray with snaps to keep the tray flat, folded or pinched at the corners as you know it from our previous Torg kickstarters.

More to come in the Pledge Manager

In case you are missing some Torg products, do not worry. We will add most of the already existing Torg books in the pledge manager.

We use Game on Tabletop as the pledge manager. Please make sure that your GOT profile is filled out completely, including name, address, country and contact information. Otherwise, we will not be able to send your pledges and may have to rescind your support for this project.

The fees for shipping will be added in the pledge manager after the campaign is finished.

We have 4 distribution centers, shipping from the US, Germany, China and Australia. The cost of shipping will be determined at the moment of distribution not purchase, should rates change in the meantime. For packages shipped outside the friendly zones shown below, custom fees may apply and must to be covered by the recipient.

We are located in Germany, which means we have to enter our prices in Euro.

We are Ulisses Spiele, the German-based and internationally renowned publisher of games like The Dark Eye, Torg Eternity, Fading Suns, HeXXen 1733, and the Aventuria – Adventure Card Game. Besides our own games, we are also known for the translation and publishing of many other gaming systems, including Pathfinder, Dungeons & Dragons, and The World of Darkness into German. For us, games are the greatest form of interactive entertainment and our goal is to publish amazing games just for you.

We have a long history of successful crowdfundings on Kickstarter and other platforms. We aim to bring our successful German games to our international fans and continuously support these games with our crowdfundings.