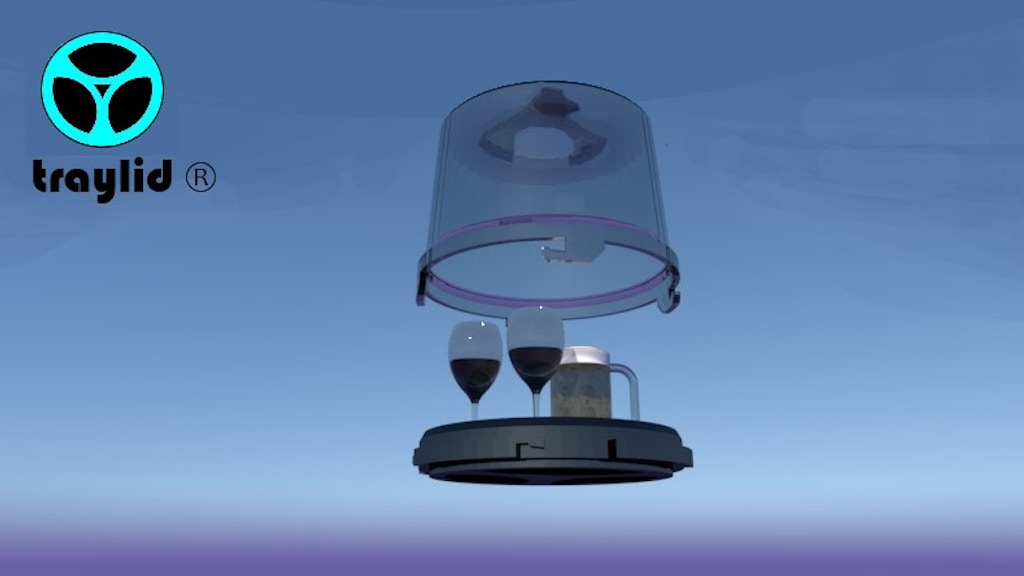 The revolutionary serving tray that will change the catering world forever.

Traylid is  the serving tray of the future.An extraordinary  invention that combines elegance,simplicity  and functionality in the most beautiful manner.

Traylid was invented and developed in marbella, Spain, by Jesús Maria Flores Vila, a local Architect, in early May  2020 during the mandatory lockdown imposed due to the COVID-19 pandemic. He devised the tray after witnessing  the economic collapse  that resulted from the crisis in the Costa del Sol ,his homeland.

He soon realized that major changes needed to be implemented  in order to bring hotels, bars and restaurants back to life as there were still many vulnerabilities in the system.  A health and security breach that became evident to Mr Flores from the beginning involved the serving protocols and the issue regarding exposed foods and beverages being carried by waiters on open trays. As a result of that research Traylid was born, developed and submitted for patent on the 18th of May 2020.

It’s not just an anti-Covid tray, it’s also a new concept that forms the backbone of what could and should be the ultimate health and security protection system for consumers against COVID-19 and other pathogens in the catering scene of the future.

These ongoing and necessary changes will inevitably involve maximizing the isolation of food and drinks in order to avoid any kind of contamination all throughout its transit from the safe preparation areas to its final destination, the customer, and that is where Traylid comes into play.

In addition to the pre existing standards, big efforts are being currently made all over the World  in order to establish new and effective security protocols involving aspects such as the conservation of the foods and beverages in bars, restaurants, hotels, cruises, etc ,as well as its handling by the personnel in charge of its preparation and even the way these products are handed over to the serving staff.

Despite all this, a huge security issue still remains unsolved  and it’s the one involving unprotected foods that are carried on uncovered  trays from the bar or kitchen to the customers table.

All of us have seen waiters, even today,carrying uncovered and unprotected trays full of food and beverages for considerable distances, through indoor or outdoor environments ,that are subject to contamination  by human presence, by their breathing, coughing, laughing and close contact ,as well as by  pollution, insects or even bird droppings.

All relevant agencies responsible for health, starting with the WHO, unanimously acknowledge the airborne transmission of the virus, and strongly recommend that  foods are protected at all times from any form of exposure.

The bottom line is that ,whatever the reason, no one has yet come up with a feasible and safe solution to this health issue and in the meantime our pizzas, sandwiches, coffees, beers, etc continue being exposed ,every day, all over the World, to all kinds of potencial hazards before reaching our tables.

A waiter wearing a mask is not the answer

Health agencies and society are starting to realize that our  security cannot rely solely on a waiter wearing a mask. In fact, wearing a mask for more than an hour is an unbearable task for anyone not to mention the sheer torture it means to a professional waiter having to do it for 2 or 3 hours whilst rushing in and out of a kitchen, or bar ,carrying trays fool of food and drinks. There is already serious medical reports that strongly advise against the use of masks for more than an hour and warn of possible illnesses related to its overuse.

Traylid is the ultimate solution

Traylid is essentially a round tray with four perimetral grooves that comes along with a transparent ABS lid ,that has a grip handle on its top, which can be easily attached and fixed to the tray just by slightly flicking the wrist.

This beautiful rendez vous can be carried out without touching the tray or it’s content at all and has been designed to secure itself automatically, in a fail-safe manner, once its lifted.

Traylid is effective, practical, safe and affordable. A single lid can be combined with several trays that can be placed or removed from  tables with a slight  twist of the wrist.

Traylid is a product designed and made to last. The production model, which backers will receive as a reward, will have an extremely solid dome lid ,with walls 5mm thick, made out of transparent ABS ,a very tough and light plastic well known for its resistance to impact and high temperatures.

Additional components will be added to the ABS mix in order to protect the lid from aging and ultra violet radiation exposure.

On the other hand  the 14’ diameter tray will have a textured surface to prevent sliding and drink spilling and will be made out of high density P.P plastic to provide a long term use.

Both the lid and the tray can be easily cleaned in the dishwasher and are also stackable separately.

Someone using a Traylid for the first time will soon realize how intuitive and simple it is to handle,  unlike traditional trays which require years of training and experience. Traylids are not only safe, they are also comfortable to carry and extremely easy to handle thanks to its very low centre of gravity which is far below the grip handle.

An inexperienced waiter, or anyone at home, would be able to carry two without much effort or skill, thanks to its clever design that  prevents food and – especially drinks –from spilling.

Traylid is not just an obvious and effective way of protecting our health, and lives, it’s also a powerful tool that can contribute to the  economic recovery  of the entire catering sector. Its widespread use would undoubtedly have a very positive psychological effect on the population which would perceive the enhanced safety straight away.

All of us in Traylid are aware that the product we’ve created is extraordinary and there is no doubt in our minds that it will eventually become an overall success. However our enthusiasm is tarnished by the fact that the whole World is currently fighting a war  against a lethal and invisible enemy called COVID-19 and that our tray could do a huge deal to help. Our priority at this moment is to deliver Traylid to the front line as soon as possible and in order to achieve this  your support is essential.

What we need from you.

A Traylid is formed by 2 separate elements made of 2 different materials. The base tray will be made of high density polipropilene and for the transparent dome lid will use ABS . Both components need to be manufactured by plastic injection and therefore 2 different very expensive steel molds need to be made, one for each component at a cost of approximately 100.000€ altogether.

Our company needs to manufacture a minimum batch of 30.000 units in order to recover the cost of the 2 molds required for Traylid model A as well as the initial costs for development and prototyping . In Addition to this, funds will be needed in order to cover the cost of producing the first batch ,general expenses, taxes and fees.

Altogether a total of approximately 422.000€ would be required in order to complete the production of the first batch(30.000 units) of TRAYLID model A, in Spain ,before February 2021.

We intend to deliver the rewards to our backers during March 2021 and start marketing the product in May at a retail price of 45€-50€ depending on the model.

If this campaign is successful we will develop 2 additional  Traylid models, each one of them with a different size, as a response to the needs and demands conveyed to us through different channels.

How to reward your priceless help

We are addressing these words to you, from southern Spain, hoping that you’ll acknowledge the potential of Traylid, not just as a remarkable product, but also as an effective tool that will help combat the pandemic as well as the huge economic crisis globally.

If you decide to support us you will be taking part in the birth of a revolutionary product, unseen and unprecedented, that will certainly make history. Your financial support is not only essential for Traylid, it’s also important for the World because our invention ultimately will save lives.

All our backers will be taking part in the birth of a revolutionary product that will certainly make history.

Your funding is not only essential for Traylid, it’s also important for the World because our invention will ultimately save lives and businesses.

We are very excited with this kickstarter campaign and hopeful that our goal will be achieved with your help.

So in the name of all the Traylid team and myself I would like to say …. Thank you!