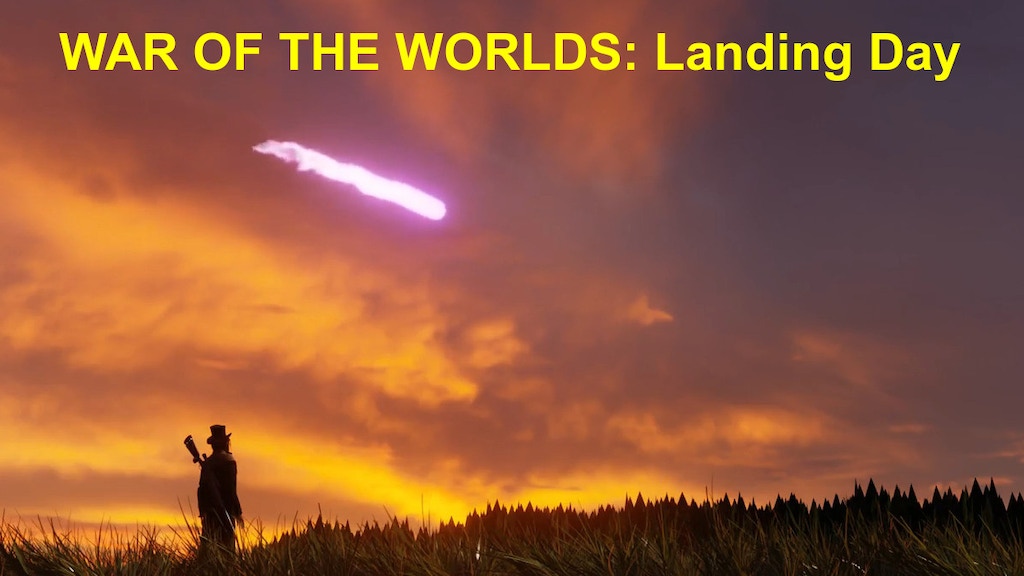 You are the Hunter… walking the tall grass in late October and watching the sun as it moves slowly towards the horizon. Suddenly, there is a loud sonic boom as a meteor splits the darkening sky and heads towards a nearby grove of trees. The Hunter thinks back to his childhood days and remembers that shooting stars were supposed to bring people good luck and good fortune – so clearly it is time for him to make a wish. It is in those fleeting moments that the Hunter shuts his eyes and wishes for the bright light of the future to shine upon him and his quiet little village of Dunningham. Soon after that brief moment of reflection, the Hunter learns that the future has come all the way from Mars to visit him and that the future is very bright indeed.

Based on the work of H.G. Wells and his classic novel, Landing Day tells the tale of the Martian arrival near Dunningham (a fictional village in the UK). The hero of the tale is you – as the intrepid Hunter trying to feed his family following a global pandemic. Once you escape (hopefully) the initial encounter, gameplay begins. The idea of the game revolves around the concept of a Tripod hunt. There will be three to five Tripods in the vicinity of the small village.  While these Tripods will adhere closely to the book version of the Martians, they will not be as indestructible as the Tripods in the 1953 movie classic or in the 2005 movie version starring Tom Cruise. In the game, there will be weapons and situations that the Hunter will be able to exploit in order to severely damage the Martians and stop their destructive reign of terror.

Landing Day can be classified as an open-world, FPP shooter within a clearly defined sandbox. That sandbox consists of the Village of Dunningham and its surrounding area. The game will encompass approximately one hundred or so buildings in its immediate environment and these buildings will be fully destructible while using the Martian heat ray. In fact, building destructibility is strongly desired and will be a priority issue of the project depending on funding received. Other visual aspects of the game are still being formulated. More modeling must be done to get the right feel of the game in regards to the gameplay itself. The trailer was designed with a limited budget and the complete graphics of actual gameplay will expand upon the concepts presented herein. It should also be noted that the final product will be designed with this trailer serving as the stylistic representation. Actual gameplay can and will change with scale considerations and developmental expansions/limitations in mind. Where it goes from this point will greatly depend on the total talent assembled and the budget we have to work with.

It is anticipated that distribution of War of the Worlds: Landing Day will be done via Steamworks for the player PC. As one of the major hubs for all things game-related, a Steam launch is the preferred method for Landing Day and notably the platform that makes the most amount of sense for our company to use. Steamworks makes delivery of the product accessible to a large market and it is estimated that Landing Day should also be able to get maximum exposure via this platform over any other distribution channel currently operating. If the project is fully funded, then distribution fees will be nominal. Any funds left over following development can be used for advertising and/or product awareness prior to launch.

The Rights to the IP (Intellectual Property)

The legal rights to use H.G. Wells book and IP now rests in the public domain and it is for that very reason that this project is now possible. Not only that, but we feel the greatest thing about the development with this particular IP is that it also throws open the possibility of new source material being created from the remnants of the old – without a crushing amount of royalties being paid for the privilege of select material access. This means that new works can be created from the old and that is a part of the project that interests us as much (if not more) than any other part of the project.

As mentioned above, one of the most exciting aspects of game development and having access to a fantastic IP is the ability to create and expand upon its original premise. Such is the case with Landing Day. As envisioned, the first module follows the original intent of the War of the Worlds story and the War of the Worlds universe; however, there are several other possibilities to consider when looking at this IP. How did the Martians get to Mars? Have they always been there? Why have they decided to land now and what is the purpose of their destructive reign of terror? H.G. Wells almost certainly had no idea of the lasting impact that his story would have on the world when he first wrote it. Below is a glimpse of where we think the franchise can go.

There are a total of four additional expansion modules/future games being considered for build out anytime after Landing Day becomes funded. They will also depend on funding in order to build them out in the manner they deserve. In addition, each module will be a standalone game, and depending on the level of success, each one will have a separate developmental platform. These are listed in the order contemplated:

War of the Worlds: London Bridges

This module envisions the battle for London by a small Tripod Army. Surrounded by the Martian Invaders, gameplay here revolves around the concept of total war. This would be a massive battlemap expansion and be similar in game design to the original concept, but with much more detail and with an added in-depth military presence.

War of the Worlds: Origins

Taking the fight to Mars, Origins will provide a look at the secret Martian Base that spawned the Tripod invasion and will answer the question as to where they came from and how they managed to build the Tripod. This particular module will have a Quake/Titanfall feel.

War of the Worlds: Shell Shocked

This module should provide a complete surprise for the player and it involves a significant development in the storyline. It will provide a phase two for the initial invasion of the planet and is partly based on a science fiction story that Soloist Games owns full legal rights to.

War of the Worlds: Homeward Bound

Is a module that will change gears completely and provide a thoroughly different game experience than provided for initially (stylistically as well – if you ruminate along the lines of Blade Runner, then you get the idea) based upon facts discovered while on Mars. If this module gets the go ahead, it will bring the H.G. Wells complete story to a new and hopefully satisfying conclusion.

A Special Thank You!