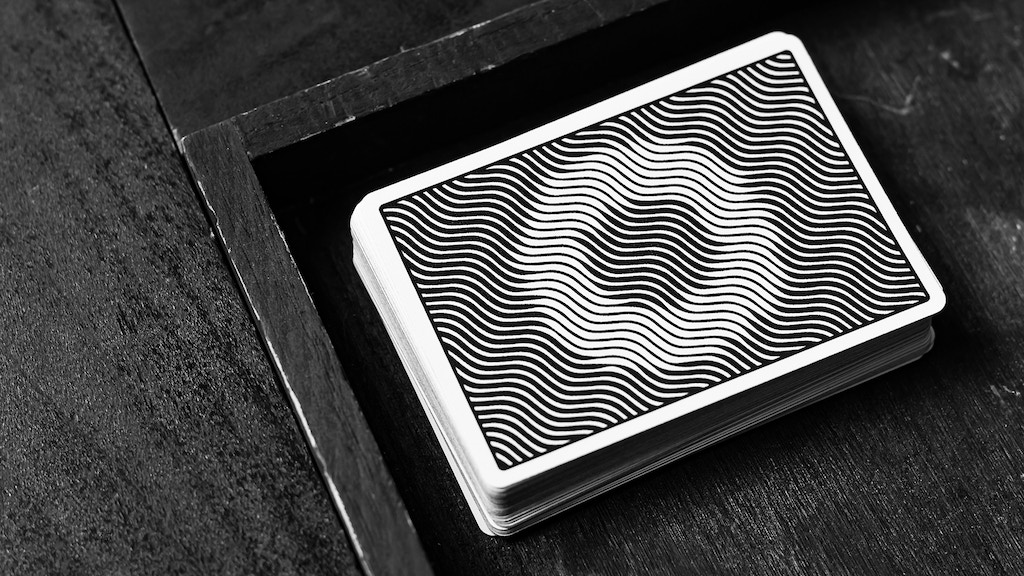 52Kards was founded in 2011 as a free educational resource for students of card magic. Over the years our YouTube channel amassed over 1 million subscribers and continues to serve as a key learning platform for the current generation of magicians.

In 2016, we created our first brand of playing cards right here on Kickstarter called MINT. The project was quickly funded and became the deck of choice for thousands of magicians and card enthusiasts worldwide. In 2018, we launched the next edition MINT 2 Playing Cards, which became one of the most successful playing card projects in Kickstarter history.

With this project we aim to create an exceptional deck with a design concept that is intriguing to magicians, cardists, and collectors alike.

A mesmerizing illusion design that will play tricks with your mind… Stare at the card for a while and watch the design come to life as it sways back and forth with subtle movement.

* The strength of the illusion may vary from person to person. Everyone’s eyes are different, so try looking at the card in different ways until you see the it.

At a tilted angle, the cards appear to have a three dimensional depth illusion where the design rises above the surface of the card to take the form of waves.

The Waves design features a subtle one-way design. This creates a low-key flipbook animation effect when the cards are shuffled in reverse directions and riffled. Magicians can also take advantage of the one-way design to secretly locate and track cards of interest.

How to claim the Day One Edition:

The Limited Edition Waves deck costs the same amount as a Standard Edition deck ($16), but is only available in bundled reward packages.

Why Use This Pricing Structure for the Limited Edition decks?

The main factors that make a deck truly limited in nature are scarcity, timing, and acquisition cost. This pricing model achieves all of that. The Limited Edition decks are the same price as the Standard Edition decks, but the barrier of entry cost is increased by making them only available in bundles. This structure also helps restrict the number of decks per backer and the total quantity of decks printed. These Limited Edition decks will only be available for the limited duration of this Kickstarter campaign, and will never be reprinted.

WHO IS THIS PLAYING CARD PROJECT FOR?

A deck of cards is a magician’s best friend. The Waves playing cards will be printed with the highest quality standards to hold up to the most rigorous practice sessions and performances; and the built in back design illusion is a sly nod to practitioners of the craft. Each deck will also include a bonus double backed gaff card for magicians to take advantage of.

The motion and depth illusion in the back design can help accentuate the beautiful movements that cardists create with playing cards. The premium production quality of the cards will also serve cardists well as they manipulate the deck in incredible ways.

There is a large and growing community of playing card enthusiasts who are always on the look out for special decks of cards to acquire and cherish. With this project we aim to create highly collectable and limited decks that are exclusively available to Kickstarter backers only. Each deck will be encased in a beautiful tuck case that can be proudly displayed on your shelf 🙂

Waves is a clean unmarked deck that can be used safely and responsibly in card games. The back design illusion is a great conversation piece and a fun way to keep your eyes occupied while your buddy is deciding whether to call or fold your bluff. You will be able enjoy game after game with these premium playing cards.

TOP 5 REASONS TO BACK THIS PROJECT

1.) Join the movement! (pun intended) Help this deck become a reality. We need your support to raise the funding required to create these cards at the highest quality standards.

2.) Get the limited Kickstarter Exclusive decks. The Day One and Limited Edition decks are reserved for Kickstarter backers only and will never be available again.

3.) You get a discount. The retail price of these decks will go up after the Kickstarter campaign is over. Save money now by supporting the project.

4.) You will receive your cards before anyone else. All of the Kickstarter backers will be taken care of first, well before the decks are available for retail.

5.) Your pledge helps support the work that 52Kards does for the magic community. If you value the free content that 52Kards has created, this is a great way to give back and support our work!

In addition to previously running large Kickstarter projects, 52Kards also operates one of the worlds largest E-commerce stores for playing cards and magic over at https://shop.52kards.com

We have a great deal of experience with shipping tens of thousands of packages all over the world and already have the infrastructure in place to distribute all of the reward packages for this project smoothly and safely.

INTERNATIONAL CUSTOMERS: Please be aware that your country may have additional fees such as VAT, import taxes, or custom’s charge. Unfortunately, We do not have any control over these fees.

You will be sent a survey after the Kickstarter campaign is over to provide us with your shipping address.

Most of our previous Kickstarter backers are from our MINT Playing Card projects and we know many are patiently awaiting a 3rd Edition MINT deck. MINT 3 will certainly happen when the time is right, but we are eager to release this brand new WAVES design first.

It’s difficult to say for sure, but we are aiming for November at the latest. Producing high quality cards takes time, and we will not be cutting any corners or taking any shortcuts, After the funds are raised the decks will begin production as soon as possible.

Kickstarter only accepts credit/debit card payments. If you don’t have a card to use, then we can arrange a payment using Paypal. Send an email to contact@52kards.com if you would like more information about this. The Day One Edtion bonus deck will not be available for Paypal backers unfortunately.