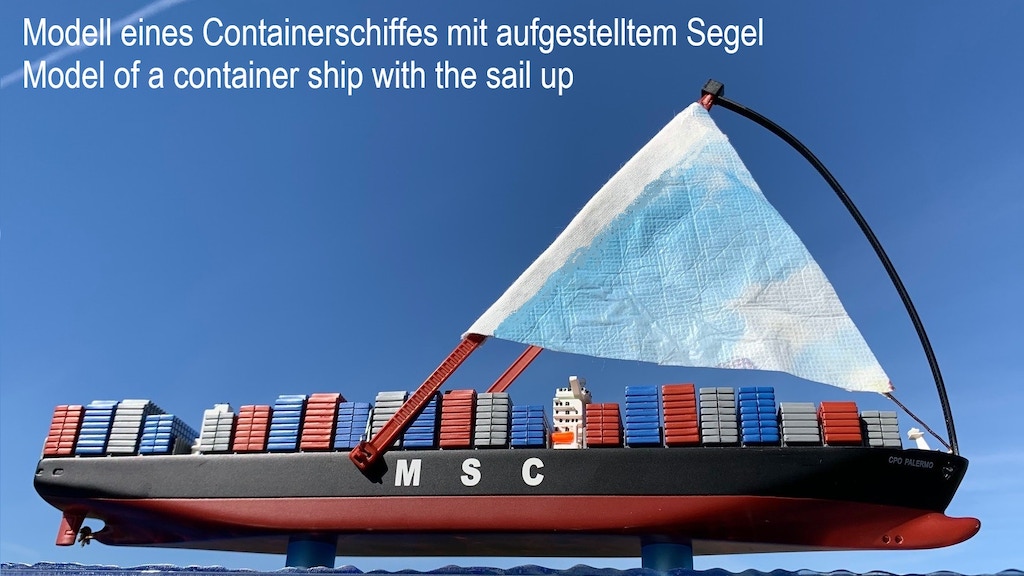 Briefly about myself and the idea!

My name, Sven Assmann, am 48 years old, married and have two children. I am an enthusiastic water sports enthusiast and am interested in sailing. In the course of this, years ago, I thought about how it could be easier to start and unload and how the mast should be so that this could be done on its own. I had this idea with the three-part mast construction and the retractable auxiliary mast on the bow. I also watched other sailors, how the rigging in the wind became an effort. Wind is a constant companion and has been used to move around for centuries. As always, the idea must first mature and the time has come for me to put it into practice. Now I have reached a point where I need a partner to continue this successfully and it will be worthwhile for both.

It is more important than ever to find potential savings in commercial shipping against the background that in the near future the “Silk Road” should become more important again. Then I researched and followed the course of various new sails, including Skysails. Here I quickly recognized the disadvantages and saw problems for an effective implementation. My invention is not revolutionary, but it can be implemented and promises success! It enables commercial shipping to save running operating costs. By the three-part The ship’s master can set up the sails and support them with little effort Use transportation. Trouble-free entry if waterways are used or the port is started. The mast construction can also be retrofitted to almost all ships. Savings of 3% – 8% are easily possible, depending on the size of the sail and the amount of wind. Around 45.000 container and cargo ships sail the world’s oceans every day. 70% of them could be Take advantage of wind power through the mast construction and achieve savings. But sailing ships for private customers are also a worthwhile target group. Over 90% of all goods are shipped over the ocean. Satellite data show the most popular Routes. There are sometimes so many freighters underway that even recording devices are overwhelmed.

Preferred trade routes are the North Atlantic, the Panama and Suez Canal and the Pacific. Long distances around South Africa and Chile are also part of this, ideal conditions for using the wind with our sail mast construction.

Description of the Invention

The invention is based on the use of wind energy to support the locomotion of water vehicles, such as container ships and sailing ships. The sail mast construction for ships with retractable and movable masts, consisting of two main masts and an auxiliary mast. The flexible auxiliary mast can be retracted in the bow and further down in the keel. All three consisting of steel or glass fiber reinforced plastic. A connection is made between the two main masts and the auxiliary mast. The main masts are attached to the hull by a hinge and set up with the help of hydraulic cylinders. For this purpose, the flexible auxiliary mast is also extended as additional stabilization. This side attachment can be attached in the middle or aft, depending on the type of ship or the hull. The sails are attached to the main mast via a sail reefing device. Additional sails can be laid out and set up over the deck. The sails are adapted to the size and scope of the construction. Furthermore, individual sails or the entire canvas can be set up for wind power use. The setting up of the sails also depends on the wind direction. The sails are tensioned and aligned with the help of the winches. The entire sail mast construction can be extended or retracted depending on the wind strength. When the sail mast construction is sunk, it is possible to drive on waterways and to load and unload it without any problems. The patent application was made on 04.04.2018 at the German Patent and Trademark Office in Munich. After the confirmation of registration and the assigned file number: 10 2018 002 901.9, documents were cleaned up and subsequently submitted. After the examination procedure was completed in December 2018, two similar patent claims from England and China were submitted, but at the same time a note was given that can be used to possibly grant a patent. Since the two other already existing claims define a three-part mast, no adjustability without disassembly, or retracting the auxiliary mast in the bow is further provided in the keel. Also setting up in the angle range from 25 ° to 75 ° is not specified, only in my patent application is this main part of the claim. After consulting my patent attorney, we were able to use the search report to reassign and redefine the claims. At the same time and on time, an application was submitted to the PCT under PCT / EP2019 / 056298. Since all patent applications are subject to a certain waiting period, we expect a final grant by the end of 2020.

There are several efforts worldwide to take advantage of wind energy in cargo and container ships. SkySails tried to revolutionize shipping with a kite sail, unfortunately it was not completely ready for the market. Terje Lade’s windship is another attempt to use wind power. Here, however, the cross wind is an unpredictable figure, which makes it very difficult to dock in the harbor, to the point that it cannot be possible. Large companies such as Airbus, with their subsidiary of Airseas, rely on the steer kite. According to their own statements, they want to reduce fuel consumption on the routes to the USA and China by 20 percent. The shipowner could also reduce the enormous air pollution from the combustion of heavy oil. Only the cumbersome handling is a problem here and in the event of gusts of wind and sudden calm, the kite collapses and can endanger the continued travel of the ship. The efficiency of the Flettner rotors is limited and they also hinder the loading and unloading of the ships in the port. The headroom can also be a problem. In the past few years, the plan was to build an 8,000-tonne “Ecoliners” freighter with the Dyna rig system, which includes four large, leaf-like sails that are intended to reduce fuel consumption during operation (of the hybrid engine) by 30% , unfortunately not yet implemented. Ships that want to use the countercurrent principle (additional propeller under the ship) are not yet fully developed and the cost-benefit effect is very low. The challenge is seen in implementing some of these technologies in concrete terms, but above all in developing them to adapt them to the commercial, technical and regulatory challenges of shipping (The Royal Institution of Naval Architects)

This is no longer questionable with my sail mast construction!

A core problem of stationary wind energy use on land or on the coast is solved by sailing energy, energy ships follow the wind and harvest it constantly. As a result, they take the fluctuations that require costly integration measures such as grid expansion, flexible power plants and storage in conventional wind power. Greater wind potential can also be tapped. While the average wind speeds in German offshore areas are ten meters per second at a height of 100 meters, route optimization with energy ships can use wind speeds close to the ground of 15 meters per second. Even stationary anchored floating platforms with built-up wind turbines do not reach these values ​​because they cannot use windy areas temporarily and only record average wind speeds of twelve meters per second in the best places. Through a targeted route selection, the areas with the currently highest wind volume can always be controlled with energy ships. This has a decisive influence on yield and utilization. When setting up the sail mast construction and setting the sails, some of the wind energy is required to overcome the ship’s hull resistance in the water. Another part is then used as thrust for the ship. According to a report by the germans parliament economic services from the environmental, nature conservation, reactor safety, education and research departments, the following emerges: There is great potential for fuel savings of up to two digits if wind drives are used as assistants. Therefore, the wind-assisted drives are considered to be the renewable drive technologies with the greatest implementation options.

Competitor in the use of wind power

Due to the copyrights I can unfortunately not show original photos or graphics, but you are welcome to view them via my source list.

Ships and requirements (with existing fleet)

Comparison of sail sizes in m²

The consumption of a container ship with a load of 20.000 TEU (twenty-foot equivalent unit) is around 250 tons of heavy oil per day. If we assume a saving of only 3% by using our sail mast construction, we will save 7.5 tons per day. The ton of heavy oil is currently traded on the international markets at € 460.00. This results in savings of € 3.450,00 per day and € 897.000,00 per year for 260 days at sea. This means that a ship owner can amortize his investment in just 2½ years. But if we assume a saving of 10%, the ratio is much larger, then we are talking about savings potential of € 2.990.000,00 per year for the ship owner. The global economy will continue to grow and therefore freight traffic too, according to the cautious one Well-known economic institutes estimate that ship cargo volume will increase by 2050 by 150% to 250%. So there is still a lot of potential!

I estimate the development costs to be around 1.8 – 2.3 million euros and a development period of approx. 1.5 years until it is ready for the market!

But I only need 75,000 euros to develop one prove model production and economy!

Number of ships in the world merchant fleet – Statista (https://de.statista.com/statistik/daten/studie/29147/umfrage/zahl-der-handelsschiffe-in-der-welthandelsflotte)

Thank you for your attention,

and help me make the world a little better!