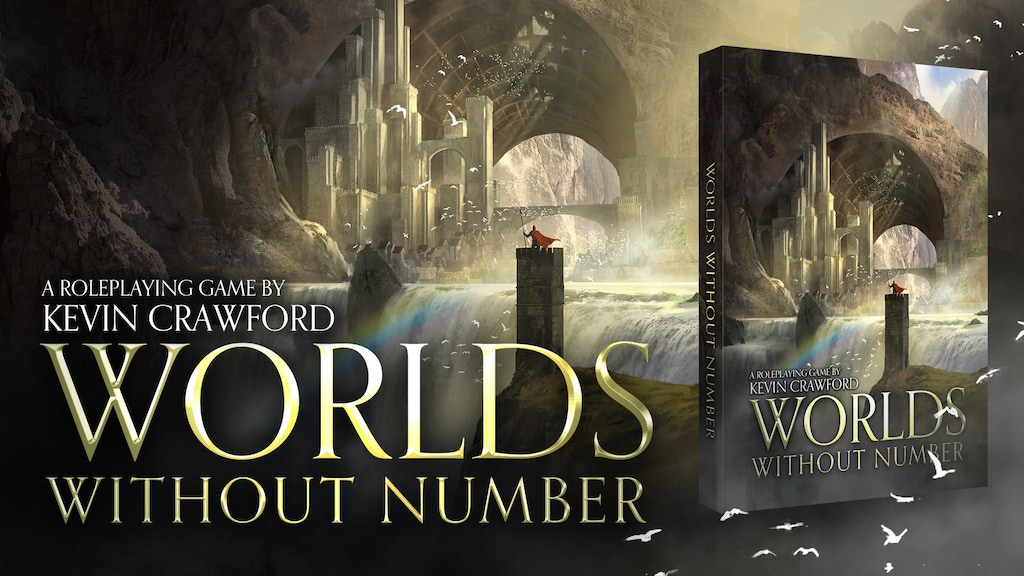 The stars gutter and the skies fade and the earth grows weary with years. Ages of men and of Outsiders have ascended and been forgotten, and only the bones of their cities and the dust of their dreams remain upon this tired world. The Legacy of their laws is woven deep now, the edicts of dead gods and fallen sorcerer-kings made to trace patterns of power we no longer understand. We are heirs to their unseen empires, and our lives are built upon their ashes.

Worlds Without Number is a tabletop fantasy role-playing game from the creator of the hit sci-fi game Stars Without Number. It’s built from the ground up to provide gritty, hard-edged adventure in the fathomless future of the Latter Earth, a fantastic realm of time-lost sorcery, savage foes, and barbaric splendor. The cold steel in the fists of your heroes and the half-understood sorcery in their tomes must suffice to overcome the monstrous remnants of ancient alien rulers and the present depredations of ruthless lords and hideous beasts alike. The riches of lost ages await in the subterranean Deeps that once held their kingdoms, and even the heavens above are not beyond the reach of the recklessly daring.

Worlds Without Number and its fantasy tools are built to be fully compatible with the sci-fi gaming of Stars Without Number and other OSR games, using classic old-school mechanics such as the traditional six attribute scores, hit points, AC, classes, and levels, along with certain modifications and refinements meant to accommodate more modern tastes. This traditional gaming chassis ensures that you can plunder almost fifty years of adventures, games, and other content built for those specifications and take advantage of the wealth of modern material being written for old-school game mechanics. An excerpt of the rough beta character creation, rules systems, and magic chapters is available right here for the curious.

Yet Worlds Without Number is built for more than just OSR enthusiasts. More than half the entire book is devoted to system- and setting-neutral tools for developing fantasy campaign worlds and sandbox adventures. Just as with the award-winning Stars Without Number ruleset, the game is designed for the working GM, someone who wants to forge their own worlds and fashion their own adventures with the most effective tools they can get. While the Latter Earth is provided as the default setting for the game, Worlds Without Number is designed to give you tools that work with the fantasy setting and game system of your choice, whether it’s an existing world or a work of your own creation.

So what’s in the book? In the system-specific portion of the book, you’ll get everything you need to play classic fantasy adventurers in an untamed realm. Old-school character creation rules and classes, the unique talents and knacks of Foci, traditions of High Magic and stranger sorcery to fuel occult character concepts, and crisp, clean system mechanics that are familiar to many but refined with practical experience. GMs will get a sheaf of monstrous foes and eldritch treasures to cast about their world, and everyone involved can confidently play out a broad range of fearless heroics with nothing more than the core book in hand.

Yet the real treasures of Worlds Without Number lie in its mighty tools of crafting and artifice, implements that have been tuned carefully to assist a GM in creating their own settings and their own exciting adventures. These system-neutral tools are built specifically to help GMs of any fantasy game system or setting turn their imaginings into playable content.

Worried about finding people to play? Just like Stars Without Number, Worlds Without Number will be provided in a free edition as well, one containing all the above tools and giving curious players one easy download for getting into the fun. But what bonus material is going to exist in the deluxe edition offered here?

Aside from these additions, I’m saving some page count for what the backers themselves tell me they want to see. If your particular enthusiasm doesn’t make it into the main book, I’ll know about it for later consideration when putting together supplements and freebies for the game.

This Kickstarter is to fund the printing of a Smyth sewn, full-color offset print edition of Worlds Without Number, along with the art costs involved in producing the book. The book will be a US letter-sized volume of about 350 pages, with the pages sewn into the binding rather than the usual print-on-demand glue. It will include printed endsheets and may involve other upgrades such as book ribbons depending on price and availability. Properly-printed books of this kind are much stronger and more durable than conventional POD glued-spine volumes.

This will be my second offset print project, after the successful and fulfilled Wolves of God KS, so I’ve already had some practical experience in handling this particular workflow. These offset books will be high-quality, sewn-binding volumes that may or may not be available after the campaign; I’m going to make the leftovers available for sale on Amazon and through my own website after all the backers have been fulfilled, but I can’t guarantee how many extras may exist, if any. If you want one, this KS is the only sure way to get one.

All backers will receive immediate access to the beta draft PDF, with the Google Docs folder listed in the campaign’s first backer-only update. The game is currently rough-draft complete and playable, so you can see from the first moment what kind of tools you can expect from it.

PDF Only+POD Coupon backers will get the PDF and a DriveThruRPG coupon allowing them to buy a print-on-demand print version of the game at its minimum print cost of about $25 plus shipping. I’m providing this option for backers in places where my own shipping is impractical, or those who want to check out the deluxe version without committing to the expense of a POD just yet.

Credited PDF Only+POD Coupon backers will get the above, but will also get their name in the backer credits of both the PDF and the print versions. While I’d like to thank everyone in the credits, the page count required to add that many names at a visible type size is regrettably difficult to allocate.

Credited PDF+Offset Print levels are available for several shipping zones, including US, UK, EU, CA, and Australia, and include the cost of shipping the book to you. These shipping costs range from $25-$30 depending on non-US location, unfortunately, but my experience in fulfilling Wolves of God obliges me to recognize this.

The mighty Sine Nomine PDF Omnibus level is offered for true fans who scorn mere material goods. This level includes not only a PDF of Worlds Without Number, but DriveThruRPG codes for every single for-pay Sine Nomine product I’ve ever written as of October 5th, 2020, an oeuvre that includes ten years worth of writing, seven complete RPGs, and 24 other books and supplements. Yes, the entire Sine Nomine catalog is yours at this level at a 25% discount plus the deluxe Worlds Without Number PDF and a POD at-cost print code. While I’m unable to offer discounts for those who already have some of the materials, you have my blessing to give your DRM-free extra copies to friends or interested bystanders.

For those who must have it all, the Sine Nomine PDF Omnibus+Print level has everything the PDF omnibus level offers plus an offset print book shipped to you. It’s everything I have; I can give no more than this.

There are no stretch goals planned for this project. While I appreciate the marketing value of such additions, the successful RPG Kickstarters I’ve run in the past seven years have all been built around simple, specific goals and rewards. I’m but one man, and it would be reckless for me to promise dice, t-shirts, miniatures, commemorative plates, or other tat when what I’m trying to create is a single traditional book. I’ve been here often enough that I don’t need to flail desperately to snatch every possible dollar in a single campaign.

Much as with my prior Kickstarters, all art I commission for Worlds Without Number will be released for free personal and commercial use by others, as I’ve paid the artists for full rights to the work.

RPG enthusiasts have several reasons to back this KS and have confidence that the goods are going to be delivered.

I’ve run seven successful RPG Kickstarters, taking in a total of $355,068 from almost ten thousand backers. Every single campaign fulfilled on time or early. I have never been late with a Kickstarter reward, let alone failed to provide it. My Kickstarters are proverbial in their regularity, efficiency, and speed of delivery. My latest KS, Wolves of God, was my first foray into offset printing. The COVID pandemic hit in the middle of its final prep, it lost a printer the first time it went to press, and it still delivered two months before the due date.

My games pull players and GMs. By comparing the number of for-pay deluxe downloads with the number of free downloads of my products on DriveThruRPG, I can get a good idea of how many curious free-version downloaders turn into deluxe-edition buyers. As a result, I can see that as many as 1 in 4 of the free version downloaders decide it’s worth paying me $20 for the full version of Godbound or Stars Without Number. This kind of support is tremendous, and shows just how widely-useful these games are to GMs.

I write for working GMs. I write every one of my games to be as useful as possible to as wide a range of readers as I can, whether or not they’re going to use the system or the setting. The system-neutral tools I design are built to generate actual, playable content and smooth the rough edges of GM prep work for any game set in the same genre. I support and encourage GMs toward using the systems and settings they like best, so I have a large percentage of faithful customers who buy my books purely for the toolsets I provide within.

Finally, see for yourself whether the game offers the tools and materials you can use. The rough beta is waiting for you in the link in the first backer-only update. You don’t have to wonder if the game suits your needs; you can pledge and find out this minute.