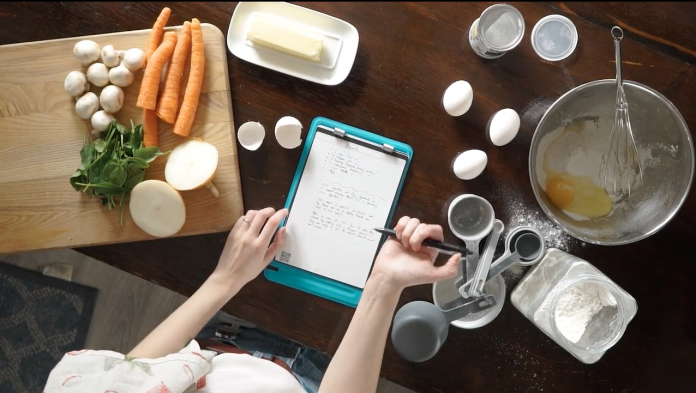 In line with its other smart and eco-friendly writing products, Rocketbook has introduced its latest product, a reusable legal writing pad.

Called the Orbit, it has already raised nearly $120,000 of its nearly $11,000 goal. Released on Tuesday via Kickstarter, 2,360 backers have already pledged an average of $29 at the time of writing.

What is the Rocketbook Orbit?

The Orbit is a reusable legal pad. But instead of using paper, it uses synthetic paper. You can simply write on it with a Pilot FriXion pen or a marker, and then you can wipe the page clean with a damp cloth and reuse it again.

The company also has an app that can be used with the legal pad to record any notes you want to refer to later. You take a photo, and it uploads it to the Rocketbook app, scanning your handwriting from any angle. There are also shortcuts you can configure in the app so that pages are automatically stored or shared in certain places when a certain box or space is checked on the written page.

The app also has OCR or Optical Character Recognition technology to transcribe your notes to digital and easily search text.

The legal pad comes with an interchangeable pack of 20 pages in its standard lined/dot-grid combo. You can also add extra packets, including a dot grid, to-do list, weekly planner, graph, and Cornell notes.

The pad itself is made of plastic and comes with a pen dock. The magnetic bar at the top allows you to change out the paper packets. There are two sizes to choose from, a standard letter size or the executive size, which is a tad smaller.

The Team Behind the Orbit

Boston-based company Rocketbook was started in 2014 after co-founder Joe Lemay forgot a notebook for a sales meeting. He and the co-founder/product developer Jake Epstein launched a notebook where the pen marks were removed in the microwave in 2015. After successfully funding their first notebook, the Rocketbook Wave, they came up with the reusable product they sell today.

The company has launched four other campaigns on Kickstarter, as well as Indiegogo. It also sells various notebook versions of its reusable paper, which retail from $15 to $40.

Should You Back the Orbit?

The Orbit is a good option for legal pad users who either want to digitize their notes or don’t want to use up a lot of space with their handwritten notes. The company already has a notebook option for those who want a more traditional look and feel.

If you want to keep your written notes but also want a digital version, there are other smart notebooks out there. Moleskine offers a notebook that automatically transfers your notes to an app in real-time, so there is no need to find time to take photos and upload your notes.

For a more digital approach, there is Wacom’s Bamboo Slate, which turns any paper written on into a digital format. And of course, you could always use a tablet and stylus pen to write directly into a digital app like Good Notes.