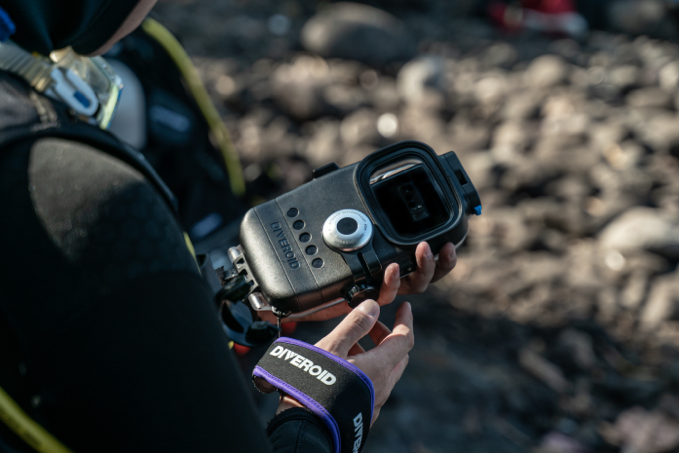 If you want to record the next time you go deep-sea diving, the Diveroid is a device that lets you bring your smartphone with you.

The device turns your phone it into an underwater camera, photo synchronised logbook and dive computer.

The Diveroid is case for your smartphone built to protect it from water so you can take it with you when you go diving.

The device supports many smartphone models, including the iPhone, Samsung Galaxy, Google Pixel, LG V and Oneplus. Other phone models can also be used with its inner adjusting compartment.

The unit features a double O-ring structure that is waterproof up to 200 ft and is made of  Gorilla Glass and polycarbonates. It also has a heat sink system that prevents fogging.

The device’s app displays important safety information while you’re diving, such as depth, dive time, ascending time, and temperature. It also has built in safety features to alert you if you’re ascending too fast or have reached your depth limit. It can also call a boat via the app, which sends a text message with your exact location.

The device protects your smartphone, meaning you can use it to take photos and videos as you would normally. However, only supported smartphones will allow you to use features like zoom and selfie.

In addition, the app will keep track of all of your photos and videos to automatically create a logbook of your entire dive.

While the upfront cost might seem hefty, the company claims it can save you money as you won’t need to buy a separate compass, camera and diving computer.

The team behind the Diveroid

The Diveroid was created by Seoul-based company Artisan & Ocean, which was founded by Jungil Kim.

An avid diver, Kim started the company in 2013 after witnessing a scuba diver pass away due to decompression sickness because they lacked a dive computer. Diving can be dangerous, especially when deep-diving, as water pressure can cause numerous changes to the body.

The Diveroid is an all-in-one device, meaning there is no need to take other devices with you. Its built-in warning system is a great addition for divers, who need to keep safety a priority. It also has features that other diving devices don’t have, like color correction for video and photos.

Its logbook automation is also handy, as it leaves you time to explore and enjoy your dive instead of remembering to keep track of everything.

There are similar devices already on the market. The Leo3 Smart is an aluminum housing device that is compatible with iOS and most Android phones and is guaranteed up to 150 meter (492 ft).  While it’s more expensive, retailing for €990 ($1,000), it can reach a much greater depth then the Diveroid and has a battery pack included. Other devices include the Kickstarter-based Lenzo and ValesTech, which is only available for iOS.

While the device seems to be the standard price for a smartphone capsule, it seems unlikely that a diver would want to bring their $1,000 iPhone X or other expensive device with them. Smartphones these days have a lot of information on them and are used to login to other devices. Taking your smartphone diving means risking the device leaking or dropping it while you’re diving.