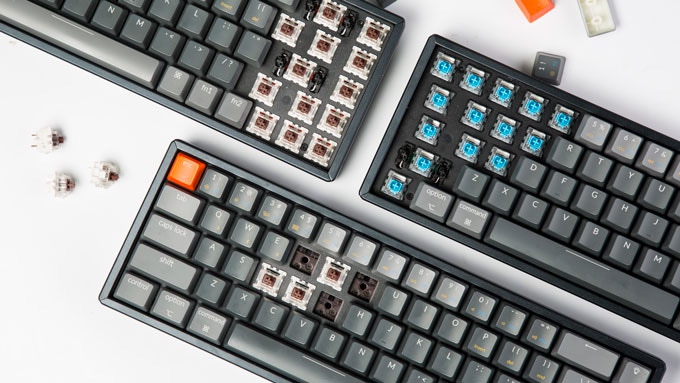 A compact mechanical keyboard is quickly becoming one of the top campaigns on Kickstarter, with over $125,000 raised since its launch in early January.

The Keychron K6 is only 65% of the size of a normal keyboard and uses combination keys to keep all the functions of a Windows or Mac keyboard and minimize bulk.

What is the Keychron K6?

The Keychron K6 features wireless compatibility and can connect with up to three other computers. It works with both Windows, iOS and Android systems. It also comes with a USB Type-C cable to connect when bluetooth is not available.

There are nine different models to choose from. Backers can choose between a plastic and aluminum case and between three different types of switch options. There is an interchangeable keyboard option called a Hot-swappable, an LK Optical switch option and a Gateron Switch option. Users can further customize by choosing a quiet or clicky type of mechanical keyboard switch.

There are also two different types of background lighting options- a white backlight or an RGB backlight with 15 different lighting options. It also has two adjustable rubber feet choices and its rechargeable li-polymer battery has a battery life of 4000mAh.

Who is behind the Keychron K6?

The Keychron company is based in Hong Kong and claims to be a group of keyboard enthusiasts and designers. Its core team member Will Ye has 10 years of experience in keyboard production while designer Sven Zhu has 11 years of expertise in industrial design, the company says.

This is Keychron’s fourth campaign on Kickstarter, with three of its other keyboards being fully funded through the site and also available for purchase.

Perks of the Keychron K6

As a mechanical keyboard, the K6 is among the most customizable options available. Those willing to splurge on all of its options can create a typing experience they enjoy. Its light and fast key touch is likely to appeal to those who work mostly with keyboard functions, such as gamers, developers and traders.

For those who prefer the look and feel of mechanical keyboards instead of rubber dome keyboards, the Keychron K6 is worth considering. It’s much cheaper than other options in the market and has more switch choices, such as the Corsair K95 for $145 and the Hyperx Alloy Elite for $150. It’s also a whole lot smaller, as other mechanical keyboards tend to be full-size. Still, while the Keychron offers two different switch options, it doesn’t have some switches like the popular Cherry. Those familiar with full-models might find the smaller frame hard to get used to. It also doesn’t have a wrist area that some of its competitors have.

Downsides of the Keychron K6

While the Keychron K6 promises to be compact, it is still a bit clunky compared to other wireless keyboards. Tablet users and those looking for a lightweight keyboard may also find its weight a bit clunky- its plastic version weighs roughly 1.2 pounds while its aluminum version is 1.5 pounds.

The keyboard also has an older style and is reminiscent of the first computers from the 1980s, a style that might not appeal to everyone. And its key multifunctionality could be a bit confusing to navigate and memorize for those not used to using keyboard functions.

The keyboard is clearly aimed at gamers and tech developers. While those in the workspace might find it useful, freelancers and other writers could find its price tag a bit hefty.