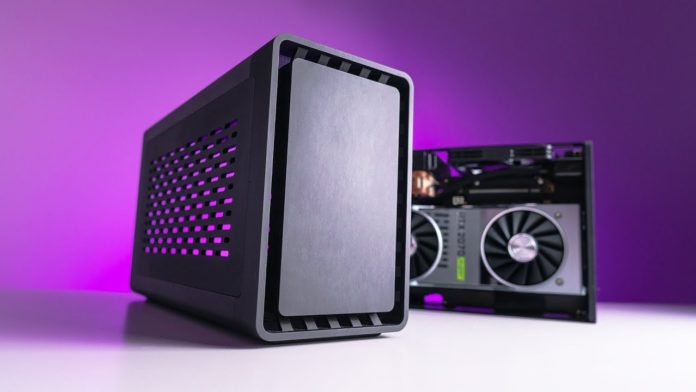 THOR ZONE, a Swedish pc tech start-up, has created a minimalistic PC case that is taking Kickstarter by storm.

The PC case, known as the MJOLNIR (aka Thors Hammer), is already 307% funded on Kickstarter. Citing $189,077 in pledges from just 453 backers, this simple computer case is an apparent hit among its supporters. Thor’s hammer has more than smashed its $61,385 funding goal, and with well over two weeks to go until the campaign closes, it still has room for further funding.

At first glance, the concept of a PC case may be somewhat drab. However, THOR ZONE has hit on a common issue facing computer enthusiasts. Frequently PC cases – particularly those made for mini-ITX motherboards – either lack performance (and try and make up for it by increasing the size of the case) or are simply ugly.

Solving both these Issues, the MJOLNIR combines a compact design with high-end performance – all while making the case sufficient enough to handle full-sized hardware, including graphics cards, liquid coolers, fans, and power supply units. Yet, unlike other Mini-ITX cases, the MJOLNIR makes sure airflow is of the highest priority, ensuring against any instances of overheating.

All this, and it’s still the size of a shoebox. In fact, according to THOR ZONE, the MJOLNIR takes up just one-quarter of the volume of a traditional mid-tower PC case.

The case is milled out of solid blocks of aluminum, providing a safe exterior for your equipment while ensuring it’s still reasonably lightweight – at a max load of 3.6 kg (with performance panels attached).

The body is decorated in an anodized finish and comes in 3 styles, Steel, Dark, and Stealth. Two side panel options – tempered glass or perforated aluminum – allow a peek into the interior of the PC. This visual benefit doesn’t stop when it gets dark either. The case comes with RGB lighting, to give your rig some ambiance.

The MJOLNIR also boasts a removable core, which means and adjustments, upgrades, or simply rotating the layout of the PC can be performed with ease.

As for why THOR ZONE chose to crowdfund, they explain that conceptualizing a product takes time, time which venture capitalists and banks don’t often welcome. The firm noted that frequently angel investors and VCs push creators to compromise their products to optimize profits – something which can jeopardize the integrity of a project.