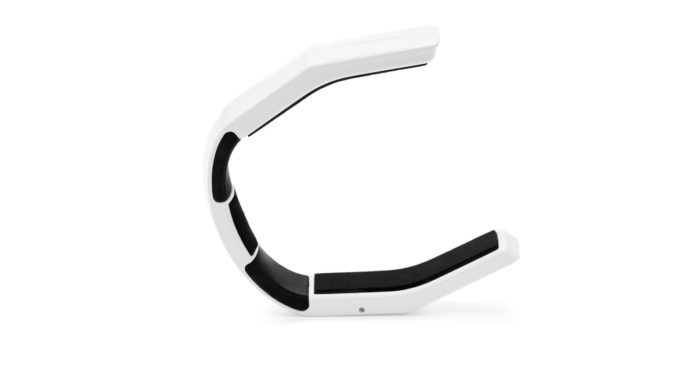 NeoRythm — a futuristic headband that promises to help you sleep better and worry less has managed to fund itself 13 times over.

The campaign is proving extremely popular on the crowdfunding site, Indiegogo — already having raised 1,348% of its original $25,000 funding goal. Right now over 1,330 backers have pledged an extensive total of $337,101 with hopes of procuring their own neurostimulator.

What is NeoRhythm, and how does it work?

NeoRhythm is a smart headband which employs magnetic field producing coils to modulate brainwave activity. In doing so the company suggests that the NeoRhythm will de-stress, and focus the user, as well as provide more energy and a better quality of sleep.

According to the creators, the NeoRhytm produces “dominant frequencies” which are designed to sync with our own brainwaves. Once synchronization is complete, the user is supposedly left with a feeling of mental clarity and relaxation.

The device is controlled via hand gestures. Tapping twice on the side of the headband activates the users chosen stimulation. In order to choose stimulation, the firm devised an app upon which users can choose between different ‘states of mind,’ de-stress; energize; sleep; focus; meditate, or pain management. Once chosen, the app automatically disconnects.

The brain being the complex and intricate organ that it is, positioning of the NeoRhythm is integral. It can be worn in 5 different positions, including the back of the head, the neck, to toward the forehead and on the top of the head. Each position purported corresponds with a certain frequency and state of mind.

The campaign elaborates on the ins and outs of NeoRhythm’s process:

“Neural oscillations, also known as brainwaves, are reflections of repetitive electrochemical activity in the brain and central nervous system. They are similar to acoustic and optical waves as they also have a specific frequency and amplitude. Our every activity is reflected in the form of brainwaves with a dominant frequency and accompanying frequencies.”

MDCN Technologies — the firm behind the NeoRhythm boast that the headband has been scientifically tested, and proven successful in two double-blind placebo-controlled studies.

These tests involved several participants solving puzzles and problems while wearing NeoRhythm. The results apparently showed a level of decreasing errors while the NeoRhythm was actively worn.

The abstract of the study revealed that magnetic field stimulation may indeed work.

“The results demonstrated overall enhanced relaxation with MF stimulation that was further improved by expectation. Relaxation, better nervous energy conservation and better performance (reduction of errors) may be concluded from all parts of the research.”

Of course, one major drawback of the NeoRhythm is its lack of long-lasting results. While relaxation and a boost to energy can be induced, it seems it’ll only last for a fleeting period of time.

Still, the benefits of the neurostimulator appear to have resonated with many, and the campaign is still far from over.