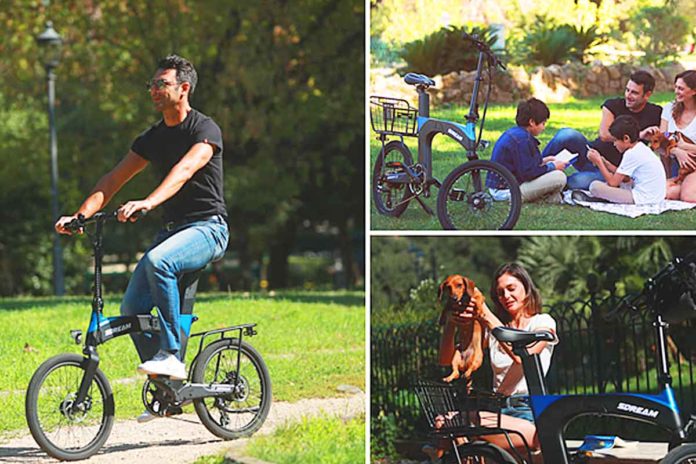 A fully crowdfunded folding e-bike is picking up speed on Indiegogo, boasting rear suspension, a 500-watt motor, and a range of additional specifications.

The Perks of the SDREAM Ur

Claiming to be one of the smoothest folding e-bikes on the market, the SDREAM Ur incorporates one key element missing in many other folding e-bikes: suspension.

Via a patented rubber anti-vibration dampening system, the e-bikes can allegedly absorb 95% of riding vibrations without sacrificing weight. Instead, thanks to the lightweight rubber, the suspension only adds the equivalent of a bottle of water in additional weight. Incredibly the creators suggest that even with the less solid materials, the suspension is actually three times more durable than traditional systems.

It isn’t just the suspension boasting slightness; the frame itself archives a minimal weight due to a rust-resistant magnesium alloy body. This provides a sturdier frame over those made from carbon fiber, with the additional benefit of being 30% lighter than traditional aluminum alloy frames.

The SDREAM is mechanized by a 500 watt brushless DC Motor, with a standalone top speed of  20mph (32km/h) and an effective top speed of 25mph (40km/h) via pedaling.

Unlike typical e-bikes—which often carry a bulky battery on display—the SDREAM’s ion-lithium battery is neatly hidden within the seat post. It can reach a full charge in around 4.5 hours and can go for up to 50 miles before needing a recharge.

The bike’s folding mechanism allows the bike to fold down to a 6third of its volume in less than 6 seconds. Moreover, a handy bottom roller allows for the folded bike to travel with ease.

One key feature of the SDREAM Ur heads up display, which shows multiple cycling efforts, including speed, trip miles, and electricity.

The bike also comes equipt with a GPS monitor allowing peace of mind if the worst occurs and the bike goes missing or is stolen. A hidden motion detection sensor delivers instant notifications if any tampering is detected.

The Pitfalls of the SDREAM Ur

While the SDREAM offers a few features missing on traditional folding e-bikes, these aren’t necessarily worth its elevated price point.

At the 50% reduced price of $1100, the SDREAM Ur sits at the pricier side of folding e-bikes. By contrast, other similar models on the market can be found for around $650, albeit with a few missing features.