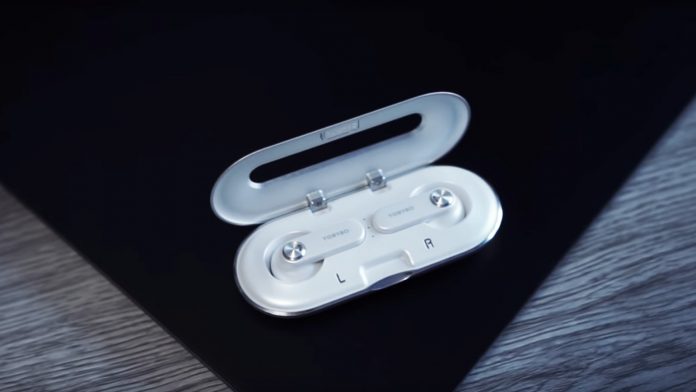 The Card20—a pair of wireless earbuds—are making plenty of noise on Kickstarter after fulfilling their initial funding goal. Here’s everything you need to know about the product, the team, and the crowdfunding campaign.

Billing itself as the world’s slimmest True Wireless Stereo (TWS) earphones, the Card20 promises unmatched audio performance without compromising on comfort or style.

Behind the Card20, and the crowdfunding campaign is the tech firm, YOBYBO. This isn’t the companies first foray into the retail world; YOBYBO cites several past earphone products. Further, according to the crowdfunding page, the firm has applied for more than 30 patents worldwide and claims sales in 20 countries and regions, including the US, Europe, Russia, and South Korea.

The founder of YOBYBO, Guo Changming, boasts 5 years in production operation and management within the smart wearable industry. Alongside Changming is chief designer and co-founder, Zhou Hongchao, who holds 10-years’ worth of experience in ID design.

As per the product timeline, the Card20 was conceptualized in January 2019 and moved through the varying phases of development for the majority of last year. The earphones were readied for pilot production in December 2019, where inspection and functionality tests took place.

The Product is due to be formally rolled out to backers in March 2020, following mass production in February.

While the timeline suggests smooth sailing into March’s fulfillment deadline, the company does advise that early production could be capped due to a lack of materials

“The top and bottom cover of the charging case is aluminum alloy, which requires processing like CNC and stamping. Early production capacity may be impacted by our high standards of the crafts and quality.”

For those quick enough to get in at the beginning, the “super early bird” offer provided the Card20 earphones at $59—a discount of 54% off the expected retail price of $129. There are still limited spaces for those looking to get a discount, with the “early bird” pledge offering 47% off. For the standard Kickstarter package, however, a 39% discount is also on the table.

The total thickness of the earbuds measures merely 0.5in, making them one of the more thinner earbuds on the market. The Card20 also features a Qualcomm chip, providing audio functionality as well as enabling Bluetooth 5.0, which allows for enhanced wireless connectivity. Much like the market leader Apple’s AirPods, the Card20 comes with a paper-thin charging unit, doubling as a holding case. The charge provided lasts for up to 4 hours, falling just behind the AirPods playtime by one hour.

Much like AirPods, one of the Card20’s prominent features is its touch gestures. Tapping twice on the left earphone both pauses and plays the track, while tapping three times wakes Siri. Tapping twice on the right earbud forwards to the next song, and tapping three times skips backward. However, the test video on the crowdfunding campaign shows some blatant issues with responsiveness—a concern which is hopefully addressed during this final phase of development

While the pricing for the Card20 on the Kickstarter campaign more than beats out heavyweight competitors such as Apple and Bose, the expected retail price of $129 sits reasonably comfortably at a mid-high price for earphones of the same caliber.

The company’s focus has clearly been on designing a thin and weightless product. However, in order to undermine competitors and fully capitalize on a novel crowdfunding strategy, more attention placed on price competitivity increased battery life, and functionality would have been advantageous.